Recently I attended the Southern California Regional Championships. I am in the Seniors Division and I went for the experience; I honestly didn’t think I would place as well as I did. This was my second Regionals, ever. I met great people and had amazing matches. So how did I do? I took first! At first I was happy to just be in Top 8, but the next thing I knew I was in Top 2 and couldn’t believe it.

The deck I played was none other than RayBoar. I teched my deck with 3 Tool Scrapper, knowing I would face Garbodor. After Garbodor took first at a previous Regionals, I figured a lot of people would play Garbodor and Genesect, so I chose RayBoar.

Now I will share my decklist, and I will describe as much as I can remember about my matches. Here’s my list:

The first round was very stressful. Not because of who I was playing, or that I was worried, it was just that it was my second time ever at a Regionals event. Enough about that though, the first round was fairly easy, but sadly I don’t remember my opponent’s name. My opponent only got to take 3 or 4 Prizes in both games, with the match being best-of-three of course.

He was playing an odd deck; it consisted of Keldeo-EX, Mewtwo-EX, and Sigilyph DRX. I set up normally and use my Reshirams on his Sigilyphs. Then I would use Rayquaza on the EXs. I 2-0 him, and I feel kind of bad, but I didn’t think he would go 0-7, and as far as I know, he didn’t.

I got a little worried because I knew who my opponent was, and I knew he was very good. This match was not a walk in the park; Theo put up a very good fight. This match also was 2-0 in my favor but again, my opponent wasn’t easy to beat, with both of our games being very close. They came down to coin flips, and luckily the flips were more in my favor.

It didn’t help that there was a little conflict going on next to us. Long story short the person next to me was being a rule shark. His opponent was not happy, and at the beginning he rolled three die which was very strange. But they got the commotion taken care of and it didn’t bother us too much.

Anyway, and a different note, Theo ended up finishing 3-4-0 (I think).

Round 3 vs. Micah (Garbodor/Big Basics)

The issue here for me was not Garbodor, but that I couldn’t get Emboar out in either game. He quickly took my Pokémon out with his Mewtwo and Landorus, and I lost my first match.

Round 4 vs. Chris Collins (Darkrai/Garbodor)

This round was also challenging, as this is not a good matchup for my deck. Luckily my 3rd Scrapper came in handy. What stunk though is that Chris is one of my good friends from Utah, so it pained me that the outcome of this round might prevent either of us from making top cut.

Anyway, Chris won the first match. I didn’t get Emboar out until about turn 3 or 4. I actually had the game in hand, but he was able to get a heads on a Catcher flip and kill my Emboar for the win.

Second game I of course went first, and I got a fairly good setup. I got Beach out and had two Tepig and a Rayquaza in play. Then things got complicated. Chris Knocked Out a Tepig and took his Prize. Later I Super Rod and shuffled back the Tepig and two Reshiram that I had Ultra Balled away. Then when he Knocked Out a Rayquaza he remembered not taking a Prize from the Tepig, so I said “I think you are right” and he takes his Prize, although that is not true, I remember him taking his Prize.

So we call a judge and time is called. The judge says I have more evidence and he puts his Prize back, and I believe we got warnings along with a 5 minute time extension. This basically gave me the game though, as Chris couldn’t take 3 Prizes in two turns so I win Game 2 resulting the match in a tie.

This is a sad game. My opponent, like myself, needs to win this game to make top cut. My opponent gets nothing and dead-draws, so I win the first game.

Then during the second game, he gets a good start with a turn 2 Lugia fully powered and takes my Reshiram for 2 Prizes. This game gets close, but I Knock Out his Lugia and he’s basically left with nothing. I win Game 2 and try to cheer my opponent up. Luckily I believe he placed in the Top 16, if not then Top 32.

This game was not a guaranteed win, but I had a distinct advantage. He doesn’t put up that much of a fight, but there were times when I was pretty worried. I 2-0 him and I kind of felt bad, but I knew he would at least get Top 16.

Round 7 vs. Emily Grieve (Garbodor/Big Basics)

This round was very hard for me. One, it’s versus Garbodor, and two, it was against another good friend of mine. But even worse, whoever won this match would be in top cut and the loser would whiff.

Emily goes second and gets pretty well set up, and unfortunately for me, she gets to attack. Luckily for me, it doesn’t hurt me much. I get Emboar out both games on turn 2 or 3, and luckily I got my Scrappers when I needed them.

Emily didn’t get much after I got a pretty big lead, so I took all my Prizes and we went on to the second game, and basically the same thing happened. She gets an okay start, but I get Emboar out fast. I have my Scrappers ready for her to put more Tools on Garbodor. Again I win due to her not getting anything mid game.

I didn’t have this game in the bag, but it felt like my opponent knew he wouldn’t win this match. I start with Tepig, but topdeck Rayquaza and bench it. I Float Stone my Tepig and retreat. It’s a little blurry after that, but I remember getting the turn 2 Emboar. I get Reshiram out as soon as I can, and take Prizes.

The next game was more challenging because I find out he plays Lugia. I start with Reshiram, but this one is sadly sacrificed. I powered up Rayquaza and managed turn 2 Emboar again. I took out Lugia, he took out my Reshiram, and I got another Reshiram out. After that it was basically game and I moved to Top 4 the next day.

Yay I get to rest! I spend the rest of the day being tired and get a good night’s sleep. I get up, grab my bag and I’m out the door. When we get back to the event it is packed with video game players. Lucky for me I got an escort to the top cut room, and didn’t have to wait in line. I then play my DS while the judges get everything prepared.

These were very good games; extremely close and challenging. My opponent goes first and gets set up fast, I don’t get going until about my 3rd or 4th turn. I put up a fight but he takes me down first game.

The second game was very good, but it was also bad at the same time. My opponent plays a Frozen City, Knocking Out my Beach. Then he tries to us Tropical Beach and starts to draw. Both the judge and I stop him, and (wrongly) the judge makes him shuffle the cards back and gives him a Prize loss. (It didn’t make a difference much, but still.)

Eventually time is called and I’m ahead on Prizes. My opponent can not take 5 Prizes to beat my 2 in time. Even if I hadn’t taken the penalty Prize, he couldn’t have done it. So the second game was mine.

Then we went to sudden death. So he goes first and plays N. We are now both at 1 card hands. He passes and I play N. His turn he plays another N. I get Juniper off of it, and I play it. I get no Energy because he keeps playing Crushing Hammer. I eventually get 1 Energy on Rayquaza and I N. Then he goes, Junk Hunts for Hammers and passes. I play Tropical Beach and use it. His next turn he fails both his Hammers and Beaches.

At this point he is able to get Garbodor and luckily I can finally get Emboar out my next turn. He plays his turn and now I Rare Candy into Emboar. I have Tool Scrapper and Superior Energy Retrieval in hand and I just need a L Energy or Supporter to win. He plays Colress, so my hand is safe, then he passes with a Darkrai up front. I topdeck the Lighting, and I Tool Scrapper, SER, and take the game.

I am now shaking internally, because I know that my opponent is very good. He was playing my best matchup, but I still knew winning would not be a simple task. Sadly for Patrick that was not the case. He gets set up, but so do I. I shred through him with Reshiram, and I win the first game.

I then get stuck with a Reshiram with one Energy in the Active the second game. It gets Lasered and Emerald Slashed. I then Outrage take out his Virizion, and Poison brings me to 20 HP left.

I Escape Rope and retreat back to the time bomb Reshiram. I Knock Out his Bouffalant and he tries to stall by Red Signaling my Emboar, but I lay a Dowsing Machine for my Escape Rope and Patrick concedes.

Overall I am very happy with my performance. I sold my boxes and earned 150 Points, which bumps me up to 382 CP. I am 68 Points away from my Worlds invite and I am going for it! So with that, I hope you give Emboar a chance. Three Tool Scrapper really help against Garbodor. Thanks for reading my first article, and I’ll try to keep you updated on my next events. 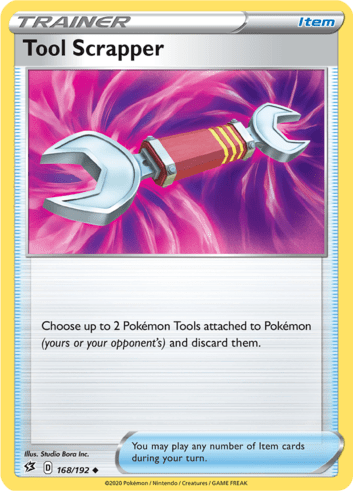