Well hello again, SixPrizes! It has been almost a year since I’ve posted an article here. A lot has changed in the TCG these past few months, especially with the November rule changes. When they came in to effect, I felt the format slowly getting more bland, and the game became less interesting. All of that is seemingly changing for the better now with the recent release of XY.

New decks are rising, old decks are crumbling, and I notice I’m having more fun with my games now, which is something that I haven’t felt since the HS-NVI format. With the release of XY, PCL added a new type: Fairy! I knew instantly that this new breed of Pokémon would get amazing support, and I could not have wished for anything better than what we got.

Let’s take a look at some of the cards that make up of my new favorite deck, Fairies.

This baby deer is one of the most important cards of your deck. For 1 Y Energy, ‘Geomancy’ allows you to pick two Pokémon on your Bench and search your deck for 1 Y Energy to attach to each of them. Not only is this a great way to accelerate your Energy attachments, but this also thins your deck into drawing your consistency cards.

Rainbow Spear isn’t too much to brag about, but it can be useful in certain situations. This attack is your answer to Klinklang PLS, Sigilyph DRX, and Suicune PLB, as most of your other attackers are EXs.

It’s a great starter, but you don’t need it much after you have board position. I would attack with this when necessary. You want to keep as much Energy in play as possible.

Aromatisse has the Ability ‘Fairy Transfer,’ which is a mechanic we are very used to as Klinklang BLW and Hydreigon DRX 97 have similar Abilities of Energy manipulation. Being able to move your Y Energy around as early as T2 is what makes the core of this deck, but what frightened me is its low 90 HP.

I then recalled back to the days of Eelektrik NVI and remembered what a force it was. Yes, it was the world’s most popular Pokémon Catcher target and Garbodor stopped it with relative ease, but then I remembered something: Catcher was automatic back then, Eelektrik didn’t have a free retreat from a Stadium, and it STILL did well.

Am I implying that Aromatisse is a modern day Eelektrik? Possibly. We’ll have to see how the format plays out. [Editor’s note: That seems like a stretch comparison to me seeing as they have completely different Abilities.]

You could probably get away with playing 2 Aromatisse, but since it is so important I wouldn’t risk the chance of pieces ending up in your Prizes.

Also at 90 HP, we have Slurpuff. The Ability ‘Sweet Veil’ is the Fairy version of Virizion-EX’s ‘Verdant Wind.’ This in conjunction with Aromatisse allows you to cure Status Conditions at will and retreat for free with the aid of Fairy Garden.

This card is great, but I have a feeling there won’t be much room for it in most Fairy decks due to space on the Bench. I would rather have a second Aromatisse in case 1 gets KO’d than to have 1 Slurpuff that isn’t helping much. Of course, this opinion may change when I play the deck more, but as of now, it’s a luxury I can survive without.

When this card was first revealed, I felt it wouldn’t be that great due to high Energy cost attacks. However, thanks to Xerneas and Aromatisse, attacking quickly with this card becomes a lot more manageable.

Its second attack, X Blast, does 140 damage, which is not bad for 2 Fairy and a Double Colorless. The downside of the attack is you can’t use it your next turn. It is wise to set up KOs on EXs so that you can finish them off with an X Blast.

This guy is your main attacker, and you want to be able to set another one up quickly if the active one gets KO’d.

I cannot express my love for this card. Only after seeing the synergy behind everything else did this card make my day. All of your Pokémon that have Y Energy attached have no Retreat Cost. This makes it even easier to get around Catcher (because people still play it); you can ‘Fairy Transfer’ to your Active, retreat back to your attacker, and keep swinging.

I know what you’re thinking… it gets replaced by Virbank City Gym/Tropical Beach too easily and there goes that plan. Isn’t that the argument with EVERY STADIUM EVER? Run more copies of it to win the Stadium war.

[Editor’s Note: I think most people play Catcher these days when doing so will net them an immediate KO. Catcher stalling isn’t as prevalent as in the past.]

I’ve never needed a fourth one, and 3 is a pretty solid number if you know when to play them.

Now that we’ve covered the core of the deck, let’s take a look at how a typical Fairy decklist should look like:

This should come to no surprise as Mewtwo-EX loves any deck that uses Energy manipulation or acceleration to generate a powerful ‘X Ball.’ It almost seems fitting as Xerneas-EX has the attack ‘X Blast’ to complement.

The last thing you want is to have your Aromatisse and friends get sniped on the Bench from Hammerhead, Frost Spear, or Night Spear. Mr. Mime has proven itself more than worthy to protect your Bench from these threats and should definitely play a role here. Mr. Mime is part Fairy type, after all.

More often than not, I don’t want to give my opponent a new hand. Shauna guarantees you 5 cards, while N is dependent on your Prize count. Three is a good number to work with; there’s never a bad time to play it. I feel that Shauna will be played similarly to Colress.

As we’ve learned from Aromatisse’s predecessors, Max Potion abuse is a necessity for success. You can effectively undo your opponent’s turn if they fail to 1HKO your attacker by using ‘Fairy Transfer’ to move Energy from your damaged Pokémon to a healthy one, Max Potion the damaged Pokémon, and move all of the Energy back on to your now healed Pokémon. I wouldn’t play less than 4 because the more often you set back your opponent a turn, the more time you have to bolster your side of the field.

Let’s face it: your Pokémon are going to get Knocked Out. You’re going to lose Energy, and you need to get them back to win. One of this deck’s flaws is that it invests so much Energy in attacking that it can be tough to set back up after being 1HKO’d. Super Rod offers that chance of revival. I feel 2 is a decent number; any more would be kind of unnecessary.

This is arguably the best ACE SPEC. It provides that late game coverage that can turn the tides in your favor. It’s your “5th” copy of all of your Trainers. To quote Conker’s Bad Fur Day: “It’s context sensitive.” It means it’ll give you just what you need at that moment in time.

While I can not accurately predict the metagame for the future, this deck is looking really promising. It has a lot of consistency, speed, power, and adaptability to do well. I would not be surprised if it does well enough to win some major events within the next few months. Thanks everyone for reading this article, and if you are ever in the Topeka-Kansas City area for a tournament, come say hello! 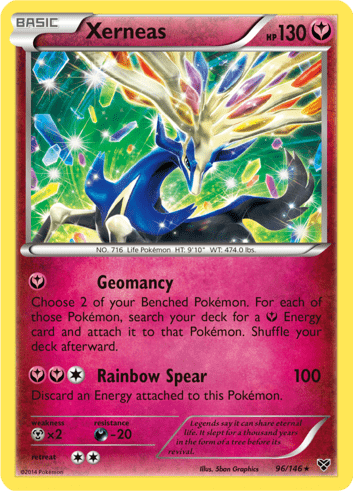