The word ‘rogue’ (sometimes spelled ‘rouge’) has enormous cache in the world of the Pokémon TCG. Despite the fact that major tournaments are always dominated (and usually won) by a handful of archetypes, many players shy away from admitting that they use them at all and prefer to describe themselves as ‘rogue’ players and deck builders.

Why do they do this? I would argue that it is largely because there is an implied superiority involved. A superiority that transcends the ability to win tournaments. By self-identifying as a rogue deck builder, a player is implying that they are a creative, free-spirited individual with the imagination to create something original and the strength to go their own way. They (unlike the rest of us) are not restricted by the received wisdom of archetypes, nor are they sheepish net-deckers who derive their success from the work of others.

But what is a rogue deck? And does it really matter if people want to call themselves rogue players? In the grand scheme of things, it doesn’t matter one bit. This is a fun game, and if people get more fun that way, then good for them. However, I think it is useful for the rest of us to have some kind of working definition of what rogue truly is.

First of all, I want to say what I don’t think constitutes a rogue deck. Slightly altering an established deck in order to improve a matchup is called ‘teching,’ not ‘rogue deck creation.’ Rarely played or outdated archetypes are not rogue. Decks consisting of Pokémon that no one plays because they are just bad aren’t rogue. So-called ‘fun’ decks with near-impossible combos aren’t rogue: in fact, most of the time they aren’t even fun because getting them to function at all is just frustrating. Decks that people use just because they are different aren’t rogue either: these are ‘hipster’ decks, and if they could talk, they would no doubt claim to be gluten-sensitive.

I would define a true rogue deck as follows:

A deck which uses uncommon or unexpected cards and/or strategies in an attempt to compete with the dominant archetypes in a format.

We have seen a number of very prominent examples of this over the years:

These decks found success because they either countered most of the metagame (Arithmetic had Gyarados MT to deal with Magmortar and Banette SW to take care of Gardevoir/Gallade), or because they implemented a new strategy that opponents struggled to deal with (the speed of Gyarados SF attacking for no Energy, the tanking approach of The Truth). Successful rogues very quickly become archetypes themselves unless metagame shifts or rotations make them obsolete (and, yes, at that point they cease to be rogues).

The Value of Rogue

Making a deck using Pokémon that no one plays is easy. Making a true rogue is hard. It demands an encyclopaedic knowledge of the card pool and many hours devoted to testing and tweaking against the metagame. Not only that, but the process is getting harder all the time now that websites (yes, like this one) and Facebook groups are spreading information everywhere. The element of surprise becomes ever more elusive and the chances of a card going under the radar are diminishing rapidly with every new YouTube upload and article.

At the same time, it feels as though the format has evolved in ways that make rogue decks difficult to construct: when you have Pokémon that trade in one or 2HKOs, regardless of what is put in front of them, then devising effective counter-strategies is not straightforward.

Should anyone even bother trying to build a rogue deck in the face of all these obstacles? If they have the skill and the patience to playtest enough, then yes they should. When a rogue deck comes off the rewards are spectacular: not just in terms of tournament success, but also because of the credit that is rightfully earned by the inventor of the deck. Those few players who are capable of creating a true rogue are rightly celebrated and admired, and this is why it would be nice to have some kind of distinction between their achievements and the non-achievement of someone who just builds a deck around a few terrible cards.

Restricting the term ‘rogue deck builder’ to those players who have earned it would restore its meaning and justify the prestige that it attracts. Hopefully, it would also stop people from looking down their noses at players who choose to play archetypes.

At the end of the day, though, there is only one Pokémon who is officially acknowledged as being rogue:

Thanks for reading, and if you do by chance come up with something that breaks the format, please send it to me immediately, just so that I can check it’s a proper rogue. 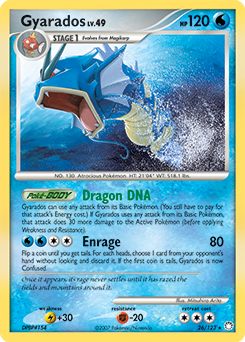