First, I would like to apologize for my lack of articles – I was in the process of graduating from college and did not have time to write about my past States and Regionals. I hope this review of my season will make up for my hiatus. This article will cover all of my big tournaments this year and what I think are the best plays for US Nationals.

Before we get going, here is proof that you can graduate college while playing Pokémon:

Just like the Houston Regional, I’ve already review in detail these tournaments. Once again, if you do not want to read the full report, I ended up winning two Cities and getting 2nd place at two more of them. This capped out my Cities Points at 180 Championship Points.

I did not write a review of this tournament because in my eyes I did not do really well. But, for sake of completeness, I played the same Virizion/Genesect deck I played during the Cities because it was the deck I felt the most comfortable with. I can’t remember how the games went, but I do know how I did:

After this I can’t remember which games I won, lost, or tied. Thanks to me taking pictures, I can though recall which decks I played against and what my record was at the end of the tournament:

I only ended up 7-5-2 at 28th place, but I did have fun with all my friends and to me that’s all that matters.

For those of you who do not know, I am in the marching band or pep band for my college, and during States time I was busy with pep band because of the NCAA basketball tournament. During week 1-of States I went to Connecticut for the Women’s Tournament to watch our team lose in the first round, which was sad to me. But for week 2-of States I had a chance to play in Tennessee. Since I was busy with college, I had no idea what to play and decided to play my friend Kenton Anderson‘s Darkrai/Yveltal deck because he had just won Arkansas States with it. Here is a recap of how the tournament went:

I ended up going 4-3, which at that time was the worst I had done at a big tournament that I took seriously. But, as you can see, this is what no playtesting can do to you. If you want to watch any of the TN States matches, I recorded during this time. Even though these are old in a sense, I still think they are fun to watch because you get to see some great games and some great players.

During week 3 I went to North Carolina to watch the Memphis Tigers beat George Washington then lose to Virginia. During these three weeks I was let down by my team and myself at Pokémon, but I would not trade those experiences for the world since it was my senior year of college.

For this Regional I had Jose Marrero and Brit Pybas help me come up with my decklist by telling me to play Roserade and Electrode in my deck. Thanks to them I did great at the tournament. Here is the list I used:

I felt really solid with this deck; it was consistent. My only auto-loss was Rayboar, but I could not think of any techs at the time that could help the matchup. Here is a recap of the tournament:

At the end of day 1 I went 6-1-1 to make it to top 8 at the 8th seed for the next day. Sadly, for this Regional we did not have enough people to make it to a day 2 of the top 32 people. Hopefully they can fix this attendance-related problem for future Regionals.

I knew in top 8 I was playing against Speed Lugia. I was happy about this matchup because if I can time Enhanced Hammers correctly I can win. But I noticed that in top 4 I would most likely be playing against Rayboar, and this scared me a lot.

Coming into day 2 I was excited to have another shot to do well at another Regional and when I arrived to the play area they had these tablecloths set up, which made the place have a exciting feel to it.

Here is the recap of day 2:

Sadly I lost in top 4 to Rayboar, which I knew I had like a 5 percent chance of beating. Even though I did not win, I had a lot of fun playing in the tournament and was happy with everything that I accomplished and gained during the tournament.

After having a great showing at the last Regional, I was really close to my invite and thanks to my prize support from the Athens Regional I had enough money to go to Madison Wisconsin Regional. With the help of a Pokéfriend I had a place to stay for the weekend and with my friend T I had a ride up there.

The night before the tournament I decided to switch up my deck some, which might have ended up hurting me. The changes I remember were taking out the Electrode line for another Muscle Band and a Jirachi-EX. Once again I was happy with the list and was excited for the tournament the next day. Here is a recap:

If you want to watch the round 3 game, click here to see how I messed up my record. The only thing I did not expect was decks running multiple Bouffants. Both my round 4 and 5 opponents ran a couple. It was hard to have answers for them and I only took 1 Prize when Knocking them Out. I ended up the day at 5-3 and whiffing the top 32 placement I needed for my Worlds invite.

As far as League Challenges, I am maxed out at 6 wins currently.

So far this season I have gained 480 Championship Points. Now that it is summer time I have time to do two things. The first is to playtest a lot for Nationals!

The second thing I have been doing is looking at all the small little things I could have done to gain the last 20 Points I need. The small ones are winning two more Cities instead of those two second places. At Tennessee States if I would have one more round I would have had enough points to make top 16 and get 20 Points. Winning one more game at Madison Regional would have got me in the top 32. The other big factor is doing better at the Regionals I top cut in.

In my eyes though, my season has gone great far and I can’t wait to see what happens at Nationals.

This year US Nationals is going to be the most nervous tournament for me in all my years at Pokémon. To guarantee my spot at Worlds I need to top 128 at Nats because that will get me 50 Points. My record at Nationals has been okay the past three years; I have went 6-3 and missed cut every time. To make this does not happen again I have been testing what I think are the best four decks in the format:

Of course I would think that this would be one of the top 4 choices because I have done great with it all year. There are multiple ways to pilot this deck at Nationals. One way is to play it with Roserade DRX 15 to make it consistent and fast. The second way is to play it with Raichu XY because he helps you out with Yveltal and Lugia decks. The third way could be to put Deoxys-EX and Lasers in the deck to make Genesect 1-shot things without G Booster. The last way is to take out the tech cards and make the deck really fast with Colress Machine.

The main problem I am having with the deck is Yveltal coming out of nowhere and KOing my Genesect. The deck also struggles against Charizard and Pyroar, which have been seeing play.

This deck has not seen much success with the current international Nationals going on, but I think it has great potential at US Nationals. The deck can 1-shot Yveltal and Lugia with Raichu. It can also 1-shot more techs that are getting played like Raichu and Absol with the help of Landorus. The deck has Garbodor to shut down Virizion/Genesect and make the Lasers in the deck useful. It also shuts down Plasma Abilities to help swing that matchup.

The problem I am having with this deck is playing against Water Pokémon like Kyurem PLF and Empoleon DEX.

The version of Plasma I am testing with is Speed Lugia. The deck is really fast and only needs to attack twice to win a game. The deck is super consistent if you can hit the heads on the Roller Skates. Also, most of the Speed Lugia decks are playing 3-4 Catcher, and if you can hit heads the game is easily swung in your favor.

The main problem I am having with this deck is Garbodor. A perfectly-timed Garbodor can ruin everything for the deck and once the deck runs out of Tool Scrappers it usually loses.

In my opinion, Yveltal-EX is the best card in format and, depending who you pair it with, it could easily be the BDIF. The deck can be played with Garbodor to shut down Abilities. The deck can also be played with Raichu, which swings the mirror matchup dramatically. The deck also plays other techs like Absol PLF to help against decks that fill their Bench up and Druddigon FLF which helps against Black Kyurem-EX PLS and Rayquaza-EX.

The only problem I am having with the deck is it not being consistent. Some games the deck can run amazing and it runs into no problems. On the other hand, if the deck gets rolling it is hard to stop it.

I hope you liked my article and had a great time reading it! I hope everyone can make it to Nationals because it is a really fun tournament and I can’t wait to see everyone this year. Good luck to everyone! 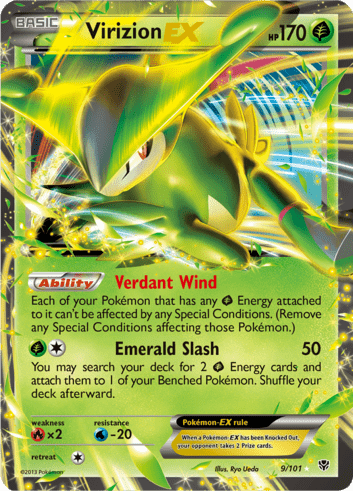