Hey guys, unfortunately I was not able to go to US Nationals, but I would like to congratulate my good friend Ishaan Jagiasi on his win in Seniors and Isaiah Williams for getting top 4 in Masters. But today I will be looking into the Landorus/Mewtwo/Raichu/Garbodor deck that won in Masters piloted by my friend Brandon Salazar. I have done a lot of testing with this deck and think I can give good insight into it. Brandon’s winning list can be found here. The following is my take on it:

I’ve talked to Brandon quite a bit and discussed matchup strategies and lists. Our lists are 5 cards different. I will now go in depth on my card choices that are different from Brandon’s and possible changes I may make.

I decided to play a 3rd Pikachu because when playing 2, you can have trouble getting them out quickly. In addition, a 3rd Pikachu makes it highly probable that you will get out 2 Raichu every game. Also, if you play 2 Pikachu and Prize 1, your opponent can Lysandre or Catcher your lone Pikachu and you can lose a game right there.

Brandon played 4 in his list. I am opting for 3 as of now because I don’t want to be forced to dump resources like Switch, Laser, or Muscle Band. I have instead opted for a Colress as a replacement. The one Colress can be very solid in mid to late game.

I really like the 2 Colress because the deck fills its Bench fast. Also, when you need a 2-3 card combo to get a KO, Colressing for 8-10 cards can be game winning. I decided on 0 Shauna because it can be underwhelming sometimes. When you want to draw a lot of cards and have a good chance of pulling off a combo Shauna is not your go-to card.

I like the Super Rod because it acts as a 7th Fighting Energy and also acts as a way to get a Garbodor line back versus Pyroar or a Raichu line versus Yveltal decks. I don’t have any problems with 6 Fighting Energy seeing as I have 1 Professor’s Letter, 3 Skyla, and a Computer Search at my disposal.

The card can be good, but it is situational. I would rather cut it for something that has a wider range of practicality.

Druddigon has been in and out of my list for a while. It definitely is a great card, but it is kind of unwieldy. Some games I get to use it and it is great, but other times I never have a good chance to use it. Also, Druddigon is the worst starter in the deck. You want to open with Landorus-EX every game and when you open with Druddigon it can be a real pain. But in certain matchups it can be very clutch and win you the game.

This card tips the mirror match in your favor. The card is clutch and can help in every matchup.

Muscle Band is very important in this deck. Having a 4th can help you deal the extra 20 damage to tip the match in your favor. In addition, a 4th Muscle Band would also help you get the kills you need more consistently.

This matchup is in favor of the Landorus/Raichu player. The Yveltal player has to get a fast Darkrai-EX going and hope we do not get a Landorus with Muscle Band. In addition, it is big if we can get a 30 damage snipe on the Darkrai before it comes up. If they have Yveltal-EX on Bench, we can Lysandre it up late game for a Raichu kill. All in all the matchup is about 60-40 in our favor. We put them on the back foot by having Weakness advantage.

This matchup has a lot going for us. We have Garbodor DRX to shut off Intimidating Mane and also Raichu to get through the Ability. Playing the Super Rod comes in handy here because they have to Catcher or Lysandre up our Garbodor DRX to have a chance to win. We can Super Rod back a Trubbish, Garbodor, and Raichu back into the deck and have a 3rd Raichu and a 3rd Garbodor at our disposal. Charizard-EX FLF 12 can be troublesome, but we can Hammerhead it and get a 1HKO with Mewtwo-EX. This matchup is about 70-30 in our favor.

I don’t expect this deck to be popular at Worlds with all the Pyroar running around, but I will mention it anyway. The matchup is close, but if you draw decently and place your Hammerhead damage correctly it can definitely favor you. You basically Hammerhead for your first 2 to 3 turns, then use Raichu or Mewtwo to clean up. Getting out Garbodor is big because you can then use Lasers. Playing 1 Druddigon does help in this matchup. This matchup is close, but I think it favors Landorus/Raichu slightly because it doesn’t run out of juice late game and can get 2-for-1 trades consistently. I would say the matchup is about 55-45 in our favor.

This matchup is very tough. Landorus isn’t a safe option because of the threat of Kyurem PLF. You need to get out Garbodor to shut off Deoxys-EX, then use Mewtwo and Raichu to take 1-shots on Kyurem PLF. Druddigon would help a lot in this matchup. In my opinion, it is about a 40-60 in their favor if you don’t play Druddigon, but 45-55 if you do.

This matchup is better than the TDK counterpart. We have type advantage in this matchup with Landorus beating Thundurus and Raichu beating Lugia. Getting out Garbodor in this matchup is big. Utilizing Landorus to set up knockouts is imperative. The Raichu for Lugia exchange works in our favor. In this matchup the Lugia player will usually miss a turn or two of hitting with Lugia because of the swift Raichu attacks. If you can stream 2 Raichu you can usually win the game. This matchup is about 60-40. It can be closer if your opponent gets a turn 2 Plasma Gale going 1st.

Aromatisse got weaker with the release of Lysandre. This matchup is weird with all the techs they can play. But when it comes down to it, I think we have the slight edge with Landorus spreading so much damage so fast. It is a close matchup, but I think it is a 55-45 in Landorus/Raichu’s favor.

This matchup is weird because their Empoleon KO our Landorus, but our Raichu KO Empoleon while Landorus KO Miltank. This matchup can be crazy, but I think Landorus/Raichu outspeeds Empoleon/Miltank. Garbodor can be a factor in the matchup, but getting fast kills on Empoleon can mean trouble for them. This matchup is very close, and I think it is about 50-50.

This matchup is pretty much a chess match. You want to use a lot of Landorus to set up kills for your Raichu and Mewtwo. Playing Druddigon can tip the matchup in your favor. If you play smart with Hammerheads then you can come out on top.

This matchup is probably the worst matchup for Landorus/Raichu. Luckily Flygon decks are clunky at times. You have to get a Garbodor out fast. Garbodor is key to winning the game. Locking their Abilities makes it much easier for you to win. You want to go in with Landorus-EX early as always and set up KOs for later. This matchup is 40-60 if they set up fast. It can really differ though depending on how fast you and your opponent can set up.

I really like this deck as a choice for the Grinder. I would also like to congratulate my friend Brandon Salazar on winning Nationals with the deck. See you guys at Worlds! 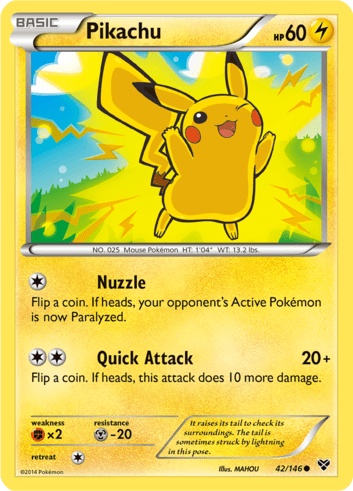