With Nationals over and Worlds around the corner, players all around the world are putting their decklists together for a shot to be the World Champion. While the big threats such as Yveltal/Garbodor and Pyroar are well known to be present at Worlds, a few rogues and surprises may slip through the cracks. Miltank FLF, in my opinion, has a ton of potential to perform well at Worlds, and here’s why:

Suddenly the card becomes a lot more interesting. Slap a Muscle Band on Miltank and now you are doing 100 damage for 1 C Energy. Talk about power!

If you attended US Nationals, or at the very least watched the stream on Pokémon’s Twitch channel, you may or may not have seen Ishaan Jagiasi pilot his Empoleon/Dusknoir/Miltank to become the Seniors US National Champion. Let’s take a look at his decklist (or at least the one Pokémon has provided on their website):

This card combo provides an excellent draw engine to draw an extra 2 cards per turn. Empoleon’s Ability “Diving Draw” allows you to draw 2 cards from your deck if you discard a card from your hand. This is where Exeggcute comes in to play. If Exeggcute is in your discard pile, you can activate its Ability “Propagation” which allows you to put Exeggcute back into your hand. You can discard Exeggcute with Diving Draw and get it right back with Propagation!

One of the main problems with Miltank is that it lacks the ability to 1HKO things. Dusknoir’s Ability “Sinister Hand” allows you to rearrange your opponent’s damage counters and take crucial KOs at your leisure. We’ve seen Dusknoir’s fringe success in previous decks and rightly so with such a game-changing Ability. That now becomes even more powerful with the Duskull printed in Flashfire. For a single C Energy, “Revival” puts a Basic Pokémon from your opponent’s discard pile onto their Bench. This is entirely disruptive as you fill your opponent’s Bench with unwanted Pokémon, as well as opening the option for you to Sinister Hand damage on low HP Basic Pokémon to take easy Prizes.

Let’s take a look at some other decks that involve Miltank.

This deck has never really seen a lot of play outside of a few Leagues I attend, but this deck can creep up on you if you aren’t ready. Below is a decklist I provide to show what you might expect to be in a typical Greninja/Miltank build:

With Greninja’s Ability “Water Shuriken,” you may discard a W Energy from your hand, and if you do, put 3 damage counters on 1 of your opponent’s Pokémon. This allows you to place damage around the board to set up KOs for Miltank, or even get cheap KOs with the Ability alone. It can also attack for 50 for a single W Energy for 50 damage, but I wouldn’t rely on that all the time.

This card is absolutely clutch in the deck. It allows you to search your deck for 2 basic Energy and put them in your hand. If you have 2 Greninja on your side of the field, you can then Water Shuriken for a total of 60 damage before you attack. I would definitely not play less than 4 Letters in this kind of deck.

Of the 3 decks I’ve mentioned, this one is absolutely my favorite. It may not be the most powerful, or the most popular, but this deck works in such a way that I find the most alluring. In fact, this is the deck I plan on playing in the LCQ this year. I don’t quite feel comfortable sharing my exact list, so I’ll share the decklist provided by The Top Cut:

Both Caterpie and Metapod share the same Ability, “Adaptive Evolution,” which allows them to evolve as soon as they are played – even on your first turn! I have played the Pokémon TCG for a few years, and the only thing close I’ve seen similar to this was Broken Time-Space. I kept telling myself, if I can “Powerful Friends” on my first turn going second, that’ll create incredible early-game pressure and might just be enough to push me ahead.

Butterfree is more so a placeholder as a Stage 2, but I have had a couple situations where I was forced to attack with Butterfree, and a Muscle Band-powered “Gust” on a Grass-Weak Keldeo-EX for 180 damage is pretty awesome. Butterfree also does not share the same Weakness as its younger forms, being Weak to Lightning. This helps against Pyroar quite well and can catch your opponent off guard.

Other situations I have used “Quiver Dance” to accelerate another Energy onto Butterfree to prepare for attacking the next turn as well as healing 40, which in the right situation can help a lot.

Where was this card when Rayeels or Blastoise/Keldeo/Black Kyurem was dominating everything? For 2 C Energy, Revenge does 20 damage plus 70 if one of your Pokémon was Knocked Out by an opponent’s attack the previous turn. Given its Dragon typing, this can help get true Revenge on opposing Rayquaza-EXs or Black Kyurem-EXs. I believe any deck that plays Double Colorless Energy should play at least 1-of this card. It really helps in a pinch.

Hypnotoxic Laser is a problem for a lot of decks, and with the inclusion of G Energy, playing Virizion-EX seems like a no-brainer. Virizion-EX’s Ability “Verdant Wind” prevents all of your Pokémon with G Energy from being affected by Special Conditions. This might be just enough to evade your opponent’s attempt at a 1HKO on your Pokémon.

No matter who you pair Miltank with, it is sure to pack a real punch. For those of you who aren’t planning on playing Miltank, I would strongly suggest teching against it because if left unchecked, Miltank can end games faster than you can say “Heads or tails?”

I will be attending the World Championships this year, and I really hope to see a lot of you there! Let me know in the comments what you would pair Miltank with, and what you think of the article. 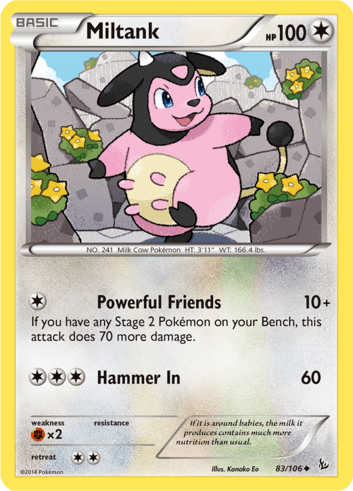