Hey again, SixPrizes! Daniel Altavilla at your service with a nostalgic article. It’s been a while since I’ve posted, due to writing for a couple other websites as well as my senior year of high school starting up, but I’m back in action and ready to provide for you all!

Are you into older formats? Have you ever played in the Seniors Division? If so, this blast from the past is for you! And with that said, let’s introduce the deck with a long anecdote.

It was July 2011 and I had just arrived in Indianapolis with my Samurott BLW 32/Donphan Prime deck. I was excited for Nationals, because I had tested all summer long, and since it was my last year as a Senior I was ready to go out with a boom. The night before the tourney, I bumped into my good buddy Michael Diaz in our hotel. He kindly invited me into his hotel room to test, and I, of course, accepted his invitation, ready to test my Samurott deck out on players other than my cousin and father.

Upon arrival to Mike’s room, I was gung-ho and itching for a battle. I engaged in a match with Curran Hill and his Yanmega Prime/Kingdra Prime deck which the boys in the room were testing. I was quickly destroyed and I felt horrible that my deck couldn’t do the trick, because it took me a whole summer to put together. After a couple of more games with Curran and then a boy whose name I don’t remember, I ran back to my hotel room and started turning my room upside down looking for my Yanmega Primes.

I built a mediocre list and with that I felt even more confident than I had with Samurott. I was heading to the Starbucks in my hotel when in a second fateful encounter I bumped into Mike and this time, deck in hand, I asked him for advice on my list. He fixed it up to his liking, as did I back in my hotel room that night, and the future was looking good.

This deck is my second most favorite deck from US Nationals 2011, coming up short behind Grafton Roll’s version of Yanmega/Magnezone, and I hope it’ll continue to be used at League and in the HS-BLW alike. Here are the 60 cards:

This list was interesting because you had Pokémon with synergy. You had a bunch of low-cost attacks and spread damage happening, without having to sacrifice more than a Yanmega here or a Kingdra there when you felt like it. You normally ended the game against Stage 1 or 2 decks using Jirachi and you had a Tyrogue for some of those other pesky baby Pokémon, such as Magby CL in Donphan Prime decks.

The coolest part of the deck was how Yanmega could attack without Energy. Also, you had Kingdra placing 10 damage with a Poké-Power, and Magnezone helped draw cards in hopes of balancing out the hand size for Yanmega. It only lost to Magneboar, even more so with Rayquaza & Deoxys LEGEND, and to Donphan with a Reshiram BLW tech, both of which ended up having a large presence in the Seniors Division. (Oops!)

The idea was to use Kingdra and Yanmega to set up spread damage onto Evolved Pokémon and bring their HP to ranges which Jirachi can take advantage of. Often you’d pride in the fact that your opponent was scared of Rare Candy, and you’d build up a bunch of pressure with the threat of a Magnezone kill to end the game.

I don’t remember much about the tournament, but I’ll go over a couple of the matches I do remember.

One of these glorious games happened around the time I was 3-0 and feeling good and confident with the deck I had chosen. Of course, I would now come up against my worst matchup: Magneboar!

In this game I was suffering at the hands of RDL and the sheer power and consistency of Magneboar. Arceus must have been watching me though, as near the end of the game, having not drawn a Prize card yet to my opponent’s 5, I played my only Pokégear 3.0. This card took the top seven cards from my deck and let me see them, allowing me to pick one from among them and add it to my hand. What did I choose? Judge.

As I played down the Judge and announced “I’ll grab Judge,” my opponent started shuffling his hand into his deck! This action was unstoppable since he did it before I could say anything, and I instantly felt bad being granted the victory by the judges in a game that was so obviously not mine to win.

Another match that was interesting was the second to last game of Swiss, versus Victoria Noah and her… wait for it… Magneboar deck. This thing had me destroyed because I had absolutely zero options against her and yet again I was down 1-6 in Prizes. I needed to win this round and my next, though, in order to hit top 64.

On Victoria’s last turn she couldn’t obtain her last Prize card. She played a Flower Shop Lady in order to put Energies back into her deck from her discard pile. She used Magnezone’s Magnetic Draw Poké-Power in hopes of receiving the Energies and she couldn’t get them! Apparently the pressure was building up because she played down a Professor Oak’s New Theory the same turn that she played the Flower Shop Lady, resulting in another game-loss victory for me. At this point I was astonished at how both Magneboar opponents I faced ended up losing to me off of technicalities alone.

The judges punished me with a Prize penalty for the previous rounds which I felt was unfair because in both circumstances I didn’t have a chance to stop my opponent from messing up. My final opponent, using Zoroark BLW/Donphan Prime, accepted the free Prize but proceeded to get destroyed by my deck. He didn’t have a Fire-type Pokémon in his deck, so Kingdra was my head honcho and really represented.

If I remember correctly, my final record was either 8-1 or 7-2, whichever record would have prevented me from making the top cut had I not gotten those last two wins.

My first match, top 64, was an odd one. It was Reshiphlosion, complete with Defenders and everything else that my deck had trouble with. I somehow pulled out the win though, I believe because my opponent had been aggressive with Reshiram instead of using Typhlosion, which was a huge mistake. I clinched the win against and I was on my way to T32, baby!

This next round was absolutely ridiculous — I had to face yet another Magneboar! This was the one game I remember better than any others because it was the most amazing luck I’ve ever had in my 11 years of playing the Pokémon Trading Card Game. Game 1, my opponent couldn’t set up a Stage 2 to save his life, and with Jirachi’s antics I managed to prevent Magnezone and Emboar from hitting the field. Game 2, my opponent eradicated me in no time, using Magneboar the way it’s supposed to be used.

Game 3, the most interesting, was won using my Cleffa! I had used Eeeeeeek! and put myself Asleep, waking up only going into my turn. This was some serendipity as I was able to set up three Kingdra and spread damage the whole game, winning off of that alone! There was a lot of Cleffa stalling, and to my opponent’s disappointment, it worked.

The next day, I started off the morning getting Pachirisu-donked by the first Yanmega/Magnezone deck I had seen all tournament. I ended up winning the next two games of that series though, thanks to Jirachi, and moved on to T8!

This last round, the round that sealed my invite, was a tough one. I feel that it was bound to happen sooner or later, but I didn’t want it to be in top 8! I had to face the one person who truly got me this far… Michael Diaz.

Just kidding! I ended up playing against David Shoyket, one of Mike’s pals who ran the deck with almost the same list as I did, but I believe he omitted Rescue Energy and ran a Double Colorless instead. We had an incredible battle. Game 1 went to him off of a nice Jirachi play. Game 2 went to me after a long fight also due to a Jirachi play, and Game 3 could have been either of ours. Game 3 never finished due to what I believe were a couple rulings that we didn’t receive time extensions for, but it didn’t really matter because we both expended all of our resources and we were better off ending it through time, anyway.

Game 3 involved a constant back-and-forth struggle, ending in an opportune Judge/Jirachi combo by David, which Knocked Out a Kingdra and a Magnezone, tying up our Prizes right as time was called. The Judge had forced me into a Pokémon Reversal; I had a Kingdra set up on my Bench, one Rainbow Energy away from Knocking Out Jirachi and winning the game.

I drew for my turn, and I was forced to Spray Splash and then pass due to having zero options. David retreated his Jirachi and sent up a Kingdra, hitting my Kingdra with a Spray Splash and ending his turn. I drew into the Rainbow I needed, attached it to Kingdra, and played the Pokémon Reversal. I rolled my die with all my might, hoping for an even result and the spot in the top 4. The die landed on… 5. My day had ended there, with an odd result on the die, as David proceeded to draw the tie-breaking Prize off of a Yanma. Good game, David!

All in all, I feel that this deck was piloted to the best of my ability, and it was an amazing result after the letdown my last year in Seniors had started out to be. If anybody is interested in the HS-BLW format, please give this deck a try! It’s the funnest deck I’ve played since HS was introduced and I don’t expect any less than amazing results from it. Thanks Mike Diaz for the deck help and thanks to everybody who had supported me throughout those three long days.

Until next time, my fellow Pokémon players! 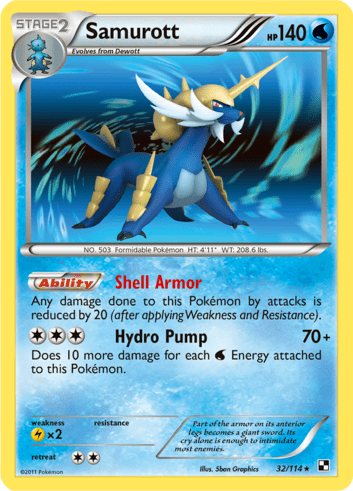