Since I began playing the Pokémon TCG in 2009, I’ve always been interested in decks that allow multiple paths to victory. A majority of decks are linear and follow the same general strategy from game to game, but there are some that require a more intricate playstyle. One deck in particular that fits this bill is known as “Regigigas Lock” and is one of the strongest decks that I have ever come across.

While others opted for Gyarados, Luxchomp, and Vilegar during the MD-on format, I chose to play Regigigas, which seemed to fly under the radar much of that season. I would often find myself being the only Gigas player at the events, and I made sure everyone knew that because I made top cut in all 12 events I played it, including a 6th place finish at Regionals and 12th at States. While these aren’t overly impressive results, I was a very young player at the time and I credit my success after MD-on entirely to the tactical wherewithal I picked up while playing this deck.

If you want to learn how to play a control deck, look no further than Regigigas Lock. It is an extremely versatile control-oriented deck offering Power lock, big-hitting attackers, Energy acceleration, disruption, and more. While there are many different ways to build the deck, I would like to cover my own variant, one that I would consider perfect.

To properly play this deck you will need to understand the card counts and ideologies behind them. This deck is far from autopilot and requires a lot of thought. If the deck looks confusing to you at first, don’t worry! After reading this article it will make more sense. Basically, from turn 1 and onward you look for any opportunity to lock down your opponent. A few points to keep in mind while reading:

Let’s begin with Regigigas DP40, the best card in the deck (and arguably one of the best in the format). At first glance, it is a 100 HP Basic with two attacks, a huge Retreat Cost, and Colorless typing. It seems okay. But if you look a little closer, you start to realize why this card is so strong.

Drag Off is an incredibly disruptive attack, dealing 30 damage but providing the option to switch your opponent’s Active Pokémon with one of his or her Benched Pokémon (before doing damage). Combined with Expert Belt this will give you a 1HKO on Garchomp C, the most popular Pokémon in the format. It puts practically any deck in a tight spot, and is one of the primary reasons why the deck is so strong.

Giga Hammer is its second attack, and for 4 Energy you’ll swing for 100 damage (with an Expert Belt). While 4 Energy may seem like a huge cost for 100 damage, there are ways to use this attack turn 2. 100 on T2 in the MD-CL format is pretty good.

I had played around with a 3-1 Regigigas line, but I didn’t like relying on the LV.X not being Prized or Azelf to fish it out if it was Prized (especially because of SP decks playing Power Spray). A good player will never need more than two Regigigas DP40. As long as you can set up one Regigigas, your game plan should run smoothly.

Regigigas LV.X’s Poké-Power “Sacrifice” gives you the option to discard one of your Pokémon from the field, allow your opponent 1 Prize, heal 80 damage from Regigigas LV.X, and attach 2 basic Energy cards from the discard onto Regigigas LV.X. This might sound like a double-edged sword, and it is, but there are scenarios where different aspects of this Poké-Power are beneficial:

There are other tricky ploys you can make with Sacrifice, but these are the main reasons why you would bother leveling up (aside from gaining the extra attack and +50 HP).

Giga Blaster is a fantastic attack, used primarily as a way to KO anything that the Regigigas DP40 cannot. With Expert Belt, Giga Blaster deals 120 damage, which is more than enough to KO a large portion of the format.

The nicest thing about Giga Blaster is the added disruption that the creators of the card were so generous to give us. Along with the damage, you also get to discard the top card from your opponent’s deck and one card from their hand. I have won games where I was able to read my opponent and discard a key card from their hand, giving me that slight edge to take the match. The attack is very strong.

Unfortunately you cannot use it two turns in a row, however you won’t necessarily use it more than twice in a game. I find myself using the attack once or twice but mainly focusing on the Regigigas DP40’s “Drag Off.”

The Abomasnow line has won me so many games that I never considered cutting the card, even if I knew that there were no Regigigas counters being played. The card was initially used as a counter to Gigas haters like Machamp SF, Mewtwo LV.X, Donphan Prime. It eventually became a core part of the deck, since every time I drew into the card I would almost always use it. 20 spread to the opponent (not including Water or Grass Pokémon), a Poké-Body that provides padding, and an awesome second attack make Abomasnow useful in many scenarios.

There have been games where I would open Abomasnow, Judge, and then Snow Play for 5 Prizes. It’s happened multiple times, which convinces me that it’s one of the best 1-1 lines that you can play in this deck. It is so versatile. It also abuses Expert Belt and, to some degree, Black Belt.

The rest of the Pokémon are pretty self-explanatory. Uxie LA and Uxie LV.X are used primarily for draw, but also as attackers if need be; they are strong against counter cards such as Toxicroak G DP41, Lucario GL, and Machamp SF. They are also highly effective versus Mew Prime. Mesprit LA is your searchable disruption, Power locking for one turn. Azelf LA searches through your Prize cards in case you prize anything that you need.

Unown Q MD is almost like a searchable Switch and is mainly used in tandem with Uxie to level up. Regice discards Energy to accelerate with Sacrifice and switches opposing Basics out of the Active Spot. Crobat G is a searchable PlusPower and is key in a few common situations:

My Trainer counts, when I initially began building the deck were questioned by friends, but I think that my engine is the strongest way to play this deck. Pokémon Collector in your opening hand is literally your entire setup. Sage’s Training is considered an oddity, but seemed to be a no-brainer to me. You are trying to set up a Regigigas LV.X as soon as possible, so you want to dump cards into the discard and utilize them later via Pokémon Rescue, Premier Ball, and of course, Sacrifice.

Expert Belt is basically required if you want to win games, so look to attach one to your Regigigas ASAP. The added HP and damage are very welcome and make it more difficult for the opponent to topple your colossal behemoth. Seeker is a great way to chain Power lock. With Drag Off, it also gives you ways to bench out your opponent. Like I previously stated, the deck can win games in multiple ways and the bench out is a play that can be set up if you are experienced enough.

The rest of the cards are pretty standard, though I would like to cover how important your 1-of Judge and Cyrus Initiative are. You can play around with the list and see if you prefer 2 Judge and 0 Initiative or vice versa, but I found this split to be most effective. Judge functions like N does and is extremely important in the SP match to clear their hand of Power Sprays before a Sacrifice. Initiative is also key, but the difference is that it can be burned during a turn where you don’t need to use a Supporter.

The reasoning behind 1 Switch and 1 Warp Point is simple. Switch is your Toxicroak G DP41 counter (you switch out of Poison so that you can sacrifice the Active Pokémon you sent up and reestablish the lock with Mesprit’s Psychic Bind), and Warp Point serves to grab a free Prize.

I use one extra Water Energy because of Abomasnow. The Energy count always felt perfect to me; I never had issues with it.

This is a slow turn for Regigigas. Assuming you start with a Collector in hand, you will want to search for Regigigas, Uxie, and Mesprit most commonly. From here, attach a DCE to Regigigas, decide if it’s worth Power locking or using Uxie, and pass.

Alternatively, if you don’t start with Collector, as long as you can get a Regigigas in play with an Energy card, you’re not in an awful spot.

If you were able to put some Energy in the discard and have access to Regigigas LV.X, it’s time to start taking Prizes. Level Up and Sacrifice to accelerate Energy. Attack and take a Prize.

If you can’t seem to find the LV.X, work to keep your Regigigas healthy. You may need to set up a second one while your first takes a hit or two.

From the turn you set up Regigigas to the turn you win the game, you need to manage the lock. Twins allows you to get any cards that you need to continue your onslaught. Black Belt should be held until it is ideal to use (I especially like to end the game with it).

Mesprit can make or break you depending on how you use the card, so look to Power lock during crucial turns. Generally, the longer you can Psychic Bind, the easier the game becomes.

This deck means more to me than any other deck I’ve played since I began playing the Pokémon TCG. It was the first deck that brought me results event after event and fit my playstyle perfectly.

I hope that you all enjoyed this article and learned a thing or two. If you try to build this deck, good luck obtaining Regigigas DP40 — they are very difficult to find! Of course, if you have further questions, feel free to comment. Thank you for your time! 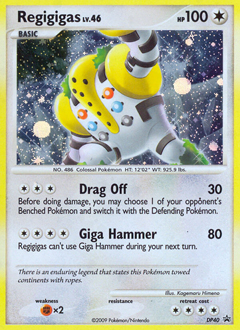