I’ve probably watched more matches of Pokémon than anyone. Not only have I personally casted more than a dozen States and Regionals, but I’ve watched pretty much every feature match on the Internet. Additionally, I’m known to spectate games at tournaments as much as possible, both to scope out what people are playing in case they should get a feature match, and because I find watching players better than me enthralling.

It’s safe to say that I’m not the norm, though. Pokémon has millions and millions of fans, yet even streams put on by TPCi only get a few thousand viewers. While it is true that the video game generally brings in more viewers than the TCG, it still doesn’t compare to League of Legends, Hearthstone, or other popular games.

So why does Pokémon have such a hard time with viewer retention? I believe the answer to that question is a long, complicated one. However, in this article I’ll do my best to break down what I feel are the major issues and how we can go about fixing them. I’ll separate these into two sections, problems with the game itself, and problems with the way the game is currently being presented.

Before we dive in, let me note that there is an inherent disadvantage to trading card games that I’m not sure can be overcome. Card games are much less exciting to watch than video games, simply because video games are about constant action, which makes it more clearer to understand whats going on. I can (and have) tuned into several League of Legends streams where I can mostly tell who is winning/what is happening despite not knowing anything about the technical side of the game. It’s much easier to pick up on the big picture when there is constantly something cool happening.

That being said, other card games are more popular than Pokémon despite having an equal or smaller fanbase, so it’s clear improvements can be made somewhere.

Namely, I think the game should be designed with fewer cards that require player shuffling. Searching the deck for Pokémon is such a deep part of the game that I don’t think that can necessarily be changed. What I would like to see is fewer effects that require shuffling when there is just as good of an option that could be used.

For instance, do we really need to shuffle the three cards we didn’t choose off Trainers’ Mail? Why do we shuffle after the first card we reveal with Random Receiver is a Professor Juniper? Would N really be all that different if we simply put our hands on the bottom of our decks, and then drew?

While all of these may seem minor, I truly believe they add up to a major reason why card games are harder to watch. Magic has done its best to shy away from as many shuffle effects in the past few years, and while I don’t think viewership was their primary motivation, I do believe that it is a factor.

Imagine that you’re brand new to Pokémon, and you turn on the stream. On the second first turn of the game, you see a player play a Hypnotoxic Laser, followed by a Crushing Hammer, followed by an Enhanced Hammer, an Acro Bike into another Acro Bike, a Trainers’ Mail, a Professor’s Letter, and lastly a Professor Juniper.

No matter how good the commentators are or how many cards you have on the screen, it’s unreasonable to expect a new player/viewer to be able to understand what is happening in all of those interactions. Things are simply moving too quickly with too little explanation for anything that’s happening.

However, if those same effects were placed on Basic or Stage 1 Pokémon, I think things become a bit different. Not only would the viewer have a turn or two to understand the cards before they get fully set up (in the case of Stage 1 or Stage 2 Pokémon), but they would also be recurring effects that are present on the board throughout most of the game.

Obviously you can’t port over Hypnotoxic Laser as an Ability that can be activated each turn on a Basic, but similarly to the shuffling issue, I do believe there is a way to design cards to make the game a bit more new player friendly. Additionally, new players are more interested in actual Pokémon that they’ve seen on TV or in video games, rather than random Items or Supporters they may or may not have an emotional connection with.

After I pull the players for a feature match at a State or Regional, I always tell them two things: Use the dice I have laid out on the table, and separate your Prizes so they are clearly visible from one another.

The Prize card issue is simple enough to understand. Players are not used to having to display their Prize cards to anyone but themselves and their opponent. While your Prize cards being in rows of three, horizontally, partially stacked on top of each other may be fine for everyone at the table, it can be very confusing to both the casters and the viewers at home. Prize cards determine the flow of the match, and miscounting how many each player has left can absolutely make or break a stream.

The dice are a little trickier. Each player brings the kind of dice they like to use to a tournament, and often times don’t like being told to use very large, very plain black-on-white d6’s. However, these are absolutely crucial for the stream, as miscounting damage is sometimes even more important than Prize cards. At the latest Wisconsin Regional Championship, several feature matches were played with all colors and shapes of dice, which ultimately made it more difficult for someone out there watching, and is therefore unacceptable.

Lastly, I would like to see players required to keep their board on a certain order, even beyond their Prize cards. Pokémon Tools should be turned sideways, Stadium cards should be in the proper place, Energy cards should be displayed in a clear manner, and Benched Pokémon should all be separate and straight. I’m not asking for players to spend a lot of mental energy on making sure their board is perfect, but I do think it would go a long way in making Pokémon an easier game to watch.

I’m a big fan of Mixed Martial Arts (MMA), and I can personally tell you that most MMA fans don’t know anything about/don’t care at all about the sport. They’re drawn to the personalities of the fighters themselves, and the drama. The story is what sells the fight, and having heroes and villains to root for goes along way in making MMA such a popular sport, and the UFC such a popular brand.

I’m not advocating for Pokémon to hold press conferences before Nationals or for there to be manufactured drama between players. However, there is no reason why the best Pokémon players in the world aren’t promoted more, and why big tournaments can’t have stories attached to them. How cool would it have been to have a five-minute video depicting the history between Ross Cawthon and David Cohen before the finals of Worlds 2011? Why doesn’t Pokémon have their own version of “North American Power Rankings” updated once a month on Pokémon.com?

I believe this is probably the most important part of making Pokémon a mainstream eSport. I follow dozens of Magic players on Twitter simply because I care about what they’re doing, how they’re doing at tournaments, and I like their personalities. I can recite dozens of funny Magic stories and tell you the histories of most pro players, even if I haven’t attended most of the events where these stories have unfolded. The same can be said for League of Legends players, the most popular of which have over 100,000 Twitter followers. This is about more than just a game.

I hope that none of this is taken as a stab at Pokémon. I write pieces like this because I care about Pokémon more than anything else in the world, and believe that it deserves to be regarded just as highly as some of these other games, if not higher. It’s my hope that, with a little bit of time and energy, we can someday make this a reality. 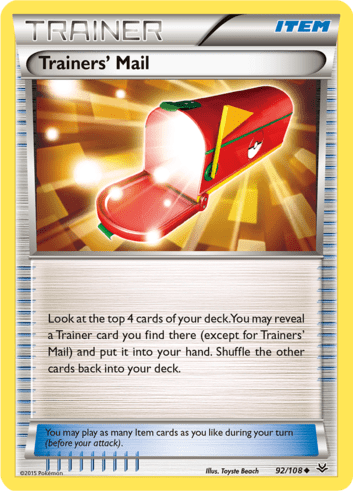