Hey everybody! I am sorry for the long delay in articles; I have been busy playing Pokémon and running my YouTube channel. In this article I would like to discuss my favorite attacker from Roaring Skies: Mega Rayquaza! The reason why Mega Rayquaza-EX (the Colorless one) is my favorite attacker from the set is because you can pair him with any form of Energy (since he needs only C Energy to attack). Also, Rayquaza has the potential to do 240 damage on Turn 1, which is pretty cool. During this article I will include a list for each of the basic Energy types out there.

These decks play certain cards that you will see multiple times, and you may have questions about them. Rather than explain the cards over and over, I thought it would be a good idea to mention them at the start.

The most important card in these decks (besides Rayquaza) and my favorite Pokémon is Shaymin. Shaymin is needed to make sure you “Set Up” in every game. Shaymin gives you the ability to draw until you have 6 cards in your hand. Combine this with a Supporter and you have plenty of opportunity on Turn 1 to establish a Rayquaza.

Keldeo-EX is used to get around Special Conditions. Some decks have the potential to Poison you and put you to Sleep through Hypnotoxic Laser. With Keldeo you can Rush In and retreat for free if you have a Float Stone attached to it. This is probably my favorite way to circumvent Special Conditions with a Mega Rayquaza deck.

Mega Turbo gives you the ability to power up a Mega Rayquaza in one turn. This card lets you attach a basic Energy from the discard pile to one of your Mega Pokémon. This is great because you can use Energy to fuel your Ultra Ball discards and get it back with Mega Turbo.

This is one of my favorite Trainers overall because of everything it can do. It can put Energies in the discard to make Mega Turbo playable. It can put Supporters in the discard, which can be then retrieved with VS Seeker. You can also discard cards you don’t want to draw into for some matchups.

The main reason you need this card is when your opponent gets rid of your Sky Field and you usually have to have discard Pokémon. This card lets you shuffle 5 Pokémon from the discard pile back into the deck, which can then power up Emerald Break again.

This is the main power behind the deck! Mega Rayquaza’s Emerald Break attack does 30 damage times the amount of Benched Pokémon on your side of the field. When you have 8 Pokémon down you can do a massive 240 damage! Just be careful and not drop your Stadium too early.

Now that we have covered these cards, let’s jump into the most hyped version of the deck:

This version had a lot of hype at the start of Roaring Skies. This deck uses Virzion-EX’s Verdant Wind Ability to make sure that Rayquaza can’t be affected by Special Conditions if you have a G Energy attached to it. I decided to play a 2-2 Raichu line to get around Safeguard Pokémon because without it you would probably lose the game. This also gives you the ability to 1-shot other Mega Rayquaza decks if they don’t play Altaria. Since Mega Rayquaza is the main attacker in the deck, we need a way to protect his Weakness which is why we play Altaria ourselves!

This list has not seen any play and has not been talked about until now! The deck revolves around Emboar’s Inferno Fandango Ability to power up your Mega Rayquaza. Since we have the Emboar in the deck I decided not to play Mega Turbo. I also included 2 Energy Retrieval to get back R Energy from the discard pile. This deck plays a Reshiram LTR to get around Raichu decks and Safeguard Pokémon which cause problems.

I have seen two versions of this deck floating around. One includes the use of Primal Groudon-EX which to me seems too slow and accomplishes the same thing that Mega Rayquaza does. The version I’ve decided to go over is the Landorus-EX version. One of the deck’s biggest weaknesses is not having the ability to 1-shot a Primal Groudon with a Focus Sash. With Landorus-EX you can snipe the Groudon for 30 damage and then Emerald Break it for a knockout next turn. The deck also plays Landorus FFI for its Shout of Power attack to power up your Benched Pokémon. Once again, this is a way to get around Safeguard Pokémon. This deck also covers your Weakness of Lightning by playing Fighting Pokémon.

This was the probably the second most hyped version of the deck at the debut of Roaring Skies. You try to get an Archie Ace in the Hole on Turn 1 to get an Empoleon into play. Once you have the Empoleon you have the Ability Diving Draw to draw through your deck quicker with the added power of Shaymin. Once again the Empoleon is great against Safeguard Pokémon and you can use it to easily KO Raichus without giving up an EX attacker. Another great thing with this deck is the Eggs! You can use the Eggs to help with Diving Draw and to fill your Bench quickly when your opponent plays their own Stadium.

I have tested with this deck the least, but it still seems like it has potential. The idea is to wall behind a Sigilyph until you have multiple Rayquazas ready to go. Sigilyph has an Ability where Pokémon-EX can’t hurt you, which is great because most decks use a lot of EX attackers. You also have the option to attack with Sigilyph to KO other Safeguard Pokémon. The last thing is if your opponent does not have a counter to a Sigilyph then you can automatically win a game by not dropping down any other Pokémon.

This is my second favorite version of this deck. This deck revolves around Yveltal-EX and Rayquaza-EX depending on the situation. If your opponent loads a Pokémon with a lot of Energy you can use Yveltal-EX’s Evil Ball to easily Knock it Out. If your opponent doesn’t need a lot of Energy you can attack with Rayquaza-EX. You can also set up multiple Pokémon with Yveltal XY’s Oblivion Wing and Yveltal-EX’s Y Cyclone attack. The deck also plays Energy Switch so you pull massive attacks out of nowhere in one turn. The Darkrai gives all the Pokémon free retreat with a D Energy attached because of Dark Cloak.

With this version you can keep a Rayquaza alive for a little while if it doesn’t get 1-shotted. We can do this with the combo of Aromatisse and Max Potion. Aromatisse gives you the ability to move around your Y Energy anywhere you want to. Max Potion heals all the damage off of a Pokémon but you have to discard all the Energy attached to it. With this combo you can keep multiple Rayquazas alive during the game and even switch between attackers. The deck plays Xerneas XY to help accelerate Energy. It also plays Xerneas-EX to help KO M Rayquaza-EX ROS 61 with X Blast and you can use Break Through to put 30 damage on a Primal Groudon on the Bench to help nullify Focus Sash.

This is my favorite version and probably the best version of Rayquaza in my opinion. This deck uses Bronzong’s Metal Links Ability to power up Mega Rayquaza or another attacker depending on the situation. You can use Cobalion-EX to get rid of Special Energies with its Righteous Edge attack or you can use its Steel Bullet attack to KO Safeguarders. Aegislash is great to wall because of its Mighty Shield Ability which prevents damage from Pokémon with Special Energy. Aegislash can also help against Seismitoad and Raichu because those deck use a heavy count of Double Colorless Energy. This deck also plays 1 Pokémon Fan Club which I love in this deck. You can use this to grab a Shaymin and a Bronzor to help set up for the turn and next turn by getting ready for a Bronzong. If Nationals were tomorrow this would be my number one pick because of all the different options in the deck. The deck struggles against Primal Groudon with a Focus Sash, so look out for that!

You can see why Mega Rayquaza is my favorite attacker from the new set because of all the versatility it has from its C Energy requirement. In this article we reviewed nine different versions of the deck based on Energy type. Sadly the only Energy we couldn’t play was Double Dragon Energy because it can only be attached to Dragon Pokémon. Thanks for reading this article and if you have suggestions please leave them in the comments section!

Also, make sure to check out my YouTube channel where I do daily videos and hopefully I can continue writing for SixPrizes. I know a lot of people don’t say this but I want to give a big shout out to Adam for everything he does for the Pokémon community! Without him I have no idea how the article or even the YouTube scene would look like.

Have a great day! 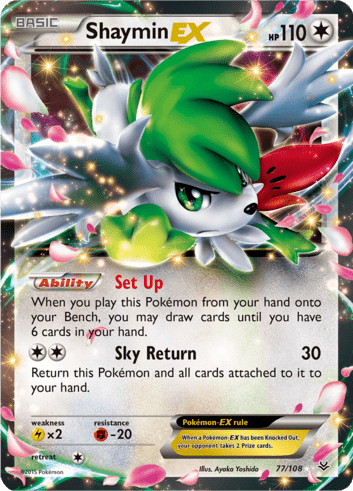