With both Canadian and US Nationals just around the corner, I thought now would be an opportune time to discuss some of the biggest questions surrounding the game and community as we head into these preeminent events. Follow along with me and feel free to post your own inquiries in the comments!

1. Will the Lysandre’s Trump Card ban prove effective in reducing the number of M Rayquaza-EX ROS 76 and Seismitoad-EX decks at the top tables?

Do I think the ban will prove effective? Yes and no. While I certainly think that these sorts of decks (M Rayquaza-EX in particular) have taken a hit from the ban, both Seismitoad and Rayquaza are still incredibly powerful cards, and I don’t expect to see their win rate decrease too much.

That being said, I do think we’ll see an overall reduction in number of these types of decks played. Not only does the ban take something out of these decks, but it gives a handful of other decks (Night March, Donphan) the boosts they may need to emerge back into the metagame and prove themselves.

I wouldn’t be surprised to see a Seismitoad-EX or Colorless Rayquaza-EX deck win one or both of these tournaments, but there’s no doubting that they have a tougher road ahead of them than ever before.

Canadian player Chase “The Kid” Moloney has made the single-elimination playoffs of every single event he’s entered since Worlds 2012 (which he won), with the exception of Canadian Nationals 2014, at which he put up a Top 16 finish. Canadian Nationals has never quite been Chase’s game, but there’s no doubting that he is on fire this season. Will he finally be able to put up that Top 8 and keep the streak alive?

My opinion? Yes, he will make top cut, and I say that despite reading this message from The Kid himself earlier today:

If aliens dropped down to Earth tomorrow and told me that I was selected to choose someone to defend the Earth from hostile takeover by playing a best-of-three match of Standard Pokémon TCG, I would pick Chase Moloney in a heartbeat. I truly believe that he is the best in the game right now, and I don’t anticipate him slowing down anytime soon.

Of course, Pokémon is a game comprised partly of variance, and there are multiple luck and skill factors at play in any given tournament. Because of this, it’s impossible to predict the outcome of a tournament with any appreciable level of accuracy. There can only be one winner, and no matter how good you are, you’re just a few dead-draws away from ending the tournament in an 0-3 drop.

It’s with all this being said that I’m confident — should Chase take the tournament seriously — he will finally get that Top 8 he’s been hoping for. Regardless of the outcome, I’m excited to watch it all go down.

3. Will the significantly decreased prize pool reduce the attendance of US Nationals?

It was recently announced that the total prize purse of US Nationals was being cut quite a bit, presumably due to the heavily increased travel awards and stipends awarded to top players going into Nationals and Worlds. Whatever the reason, the decision has caused a lot of debate within the community, but will it actually hurt Pokémon’s bottom line?

Firstly, I think the prizes for US Nationals are mostly fine. After all, the travel stipends have been absolutely huge this year, and I would bet that whatever Pokémon is giving out in stipends and awards (which is impossible to know due to unknown costs of flights/hotels) is comparable to the prizes from previous years’ Nationals. The distribution may be a bit different, but overall I don’t think the player base is losing much, if anything, and there is an argument that this method of prize distribution is actually better for the game.

There’s no denying that it’s had an impact on the player base, though. Regardless of the underlying causes, it’s strange to look at the prizing for the biggest Pokémon event of the year and realize that it’s not only being reduced, but by a significant amount. That’s really my only problem with this decision, at the time when TPCi is focusing more efforts than ever into promoting the game through streams and content, I’m not sure this sort of decrease in prizes is good for the casual fan. The person watching the Nationals stream from home won’t understand the complexity of travel awards — they’ll just notice how small the prizing is compared to other games they could be watching that day.

Even still, I don’t think this is going to have much of an effect on attendance. Nationals is still a very prestigious event and there is still a lot on the line. Additionally, the stipends make it easier for anyone in the Top 100 to justify attending! I would be surprised of we didn’t see an uptick in Masters Division attendance as compared to last year (past attendance figures here).

4. With Tropical Beach announced as a prize for side events, will we see a significant drop in the card’s value?

Tropical Beach was an expensive card almost immediately upon release, and even now, while only being legal in Expanded and not seeing a whole lot of play there, it regularly goes for $75+ dollars on the secondary market. Will this new printing of Tropical Beach bring the card down to a more reasonable price?

My answer: Yes. We don’t yet know exactly how Tropical Beach is going to be given out, but based on the wording of the side event schedule, I’m going to bet there are going to be quite a few more Tropical Beach released into the wild after July 4th weekend. I wouldn’t be surprised if the entire Top 8 were given the card, and I would only be a little shocked if it was a participation reward for the event!

Even if I’m wrong about how many are going to be in circulation, I can’t imagine this won’t usher at least a small drop in price. The card hasn’t been outstanding in the format, and with on-site vendors likely to pick up more than they know what to do with, this seems like an easy call.

Interestingly, if the new version comes with new art, I could see the price of 2011 and 2012 Tropical Beaches rising a bit, especially if the card starts to see more play in Expanded tournaments. There is always a market for older versions of legal cards, and there are fewer of the Worlds Promo Beaches in the hands of players than ever. I wouldn’t go out of my way to pick up original copies, but it’s certainly something to keep in the back of your mind.

5. Will we see another lesser-known player win the US National Championship?

My opinion: Yes. I’m just running the numbers on this one. Nationals is such a huge event that it’s hard to bet against someone lesser known taking home the whole thing, regardless of how many well known players are in the room, or how skill-testing the format is.

This is not to take anything away from these players. Winning an event of this magnitude is not only going to take luck, but also a lot of skill, both in-game and in deck selection. Just because you or I might not be familiar with a player doesn’t say anything of their skill, and some former unknowns have gone on to have quite stellar careers. More than anything I’m excited to see which players make their name known next weekend.

6. Will the outcome of Canadian Nationals have a profound impact on the US Nationals metagame?

After the mid-season rotation in 2011, Yanmega/Magnezone decks made quite the splash at Canadian Nationals, causing the US Nationals metagame to shift drastically, even driving the price of Yanmega Prime up to $70 at one point! Will the Lysandre’s Trump Card ban have a similar effect?

My opinion: No. The mid-season rotation was a much more dramatic change than the removal of one card. It caused the entire metagame to turn on its head, and rewarded the players who were able to discover and perfect synergies like Yanmega/Magnezone and Magnezone/Emboar in short time. I don’t believe that we will see any decks come out of Ontario that are the same combination of powerful and relatively unknown.

However, like always, I do believe the US Nationals metagame will become much more homogenized due to the prior weekend’s results. Players unsure of what deck to play will be given a few stress-tested options, and players looking to prey on the metagame will definitely have to pay attention to the results and alter their decks to react to them.

That’s all I’ve got for today! I hope you enjoyed reading some of my thoughts coming into these two huge events! I’ve got a wedding to attend over US Nationals, but I’ll be eagerly watching from home hoping to see one of my pals or an interesting rogue take home the gold! 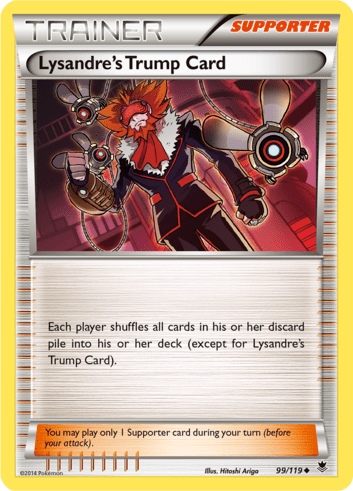