By now I’m sure you’ve all heard the news: All Regionals next season are going to be held exclusively using the Expanded format. This means no more switching formats between days. At the beginning of Day One, you’ll register an Expanded deck and play that same deck for Day Two and Top 8.

As with any game-changing announcement, this has caused quite the commotion in the Pokémon community. Everyone has their own take on the subject, and thanks to platforms like Facebook and Twitter, everyone is able to express their opinions as loudly and as often as they’d like. As you might expect, the reactions have mostly been negative, with posts like these being commonplace across social media.

As an aside, I think it’s great that we as a community can have these types of discussions. Everyone is entitled to their own opinions, and the fact that our community is made up of fans dedicated and passionate enough about the game to spend this much time arguing about a subject is a good sign. When a big announcement is made and no one says a word about it, that’s when you’ll know something is wrong.

If you haven’t figured it from the title, I am a huge fan of both the announcement and the Expanded format in general. In order for me to address this topic as best I can, I’ll tackle each issue that I’ve seen brought up in the last few days, and respond to each individually.

My response to this issue is twofold:

A. You’re right. Expanded wasn’t that fun last year. Why? Because it was almost exactly the same as Standard. BLW-on and BCR-on only differed by six main expansions. Besides the inclusion of Skyarrow Bridge, Dark Patch, Level Ball, and Archeops NVI, the format was nearly identical to Standard, and multiple Day Two/Top 8 competitors in last year’s Regionals opted to play their same Standard deck from Day One. This is clearly a sign that the format was not in a great place.

However, that has all changed! Expanded now includes 11 main expansions that won’t be legal in XY-on and — because the majority of tournaments will likely be held in the Standard format — I believe Expanded Regionals will serve as a refreshing break from the grind of Standard. One of the community’s biggest complaints throughout my time with the game has been that formats get stale too quickly, and the presence of Expanded helps to alleviate that issue.

Additionally, a big part of the reason why Expanded wasn’t fun last year was because no one played it unless they had to. With players now having to focus entirely on Expanded for some of the most important tournaments of the year, it’s clear that the format will be explored much more than it ever has before, and new strategies are bound to pop up. There is a gigantic difference between a format that players spend weeks testing, and one where you choose a deck based on whichever you can build most easily on the morning of Day Two.

B. An entire new set is being released! With every new set comes changes to the format, but Ancient Origins in particular seems to be packing some heavy hitters, so it’s not unrealistic to think that we will see profound changes in the meta, starting as early as next month. Because new sets are released before each string of Regionals, Expanded will be comprised of a slightly different card pool each time we play it, hopefully meaning that it will never feel stale or boring.

Point 2: “There will be broken combinations with such a large card pool!”

There seems to be a belief within the community that the designers and developers have no idea what they’re doing, and did not intend our upcoming sets to be played with the Black & White era of cards. I’m here to tell you that this is just untrue, as Japan plays Expanded for a number of their tournaments as well. Because of this, it’s likely that there is even more of a focus on Expanded than Standard when cards are designed.

Additionally, I’ve been playing Pokémon competitively for six years, and in that time, there have been almost no accurate predictions from the community about what the format will look like after any set is released. From as far back as Lost World to as recently as Pyroar, the fact remains: We are terrible at guessing with the metagame will be before we have our hands on the cards. I would be weary of anyone who claims the format will be broken in half before they’ve actually had a chance to test it themselves.

Lastly, with the banning of Lysandre’s Trump Card, Pokémon has proven that they are not afraid to step in if something is truly so degenerate that a change is required. Not only do I have faith in the design and development teams of Pokémon, but I also believe that should something slip through the cracks, they will handle it swiftly.

Point 3: “Expanded cards will be too expensive.”

While the cost of any card is relative to how much expendable income any given player has, I think it’s safe to say this is just plain untrue. The only prohibitively expensive card that exists in Expanded but not Standard is Tropical Beach, and that card barely sees any play. There are cards like N and Max Potion, which are relatively expensive and will be legal in Expanded, but even those cards are not exactly at the top of the list of most unobtainable cards in either format.

Either way, I’m not sure this conversation is too relevant to our discussion here today. I’m not writing this article to defend everything about the Expanded format until the end of time, rather I’m focusing on the changes that have been made for the upcoming season. It’s possible that cards will eventually become too expensive; it’s also possible that TPCi has a plan in mind to deal with that if it comes up. Either way, it’s nothing to be concerned about for the time being.

There is one relevant possibility though that would be a positive for everyone. If the Expanded format is successful, retailers may become more likely to stock Pokémon since the cards will maintain better long-term value. This would not only give players better access to cards, but the financial support and marketing exposure would be beneficial for TPCi as well.

Those are the three main arguments I’ve seen against implementing Expanded in a more dramatic way. I hope that I’ve presented good enough arguments that you can all see the topic from my point of view. If I missed anything, please let me know in the comments and I’ll give you my take on it as soon as possible.

Before I leave, I have a final positive point that I would like to address:

Expanded — and multiple formats in general — are good for the game.

Pokémon players have a tendency to equate how difficult something is to how good it is. How many times have you read about a format or deck being “skill based” as a reason for why it is awesome? On the other side, how many times have you heard about how terrible a format or deck is because it “takes no skill”? Better yet, look at the reactions to this year’s World Championship invite threshold. Pokémon players are constantly looking for ways to prove that they’re better than their peers, and therefore assign value to how difficult something is to achieve.

Multiple formats is the definition of skill testing. By forcing players to become knowledgeable of both formats in order to be successful throughout the season and qualify for the World Championship, TPCi is actively making the game more skill based, doing exactly what every competitive Pokémon player on the planet claims that they want.

In order to succeed at tournament Magic, players are required to play 2-3 Constructed formats throughout the tournament season, as well four different Sealed and Draft formats. I don’t like to make too many comparisons to Magic (a game I’m also very passionate about), but I’ve listened to plenty of competitive players talk about how Magic is a superior game because of their organized play system, so I feel that this deserves a mention.

Whether you agree with me or not, above all else I hope that my points were delivered well enough that you can all understand that there are two signs to every coin. Like I said in the introduction, I’m glad that we as a community can have this type of discussion — I would just like it to be a little more civil and useful sometimes. 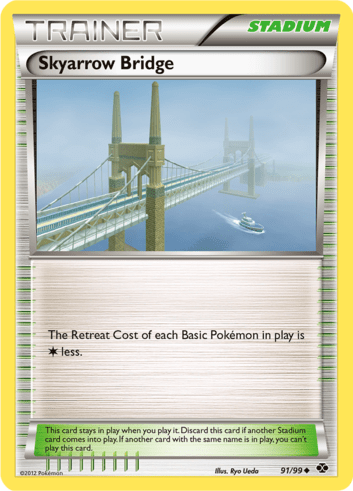