Hey guys! This week I thought I would talk about a subject I’m pretty passionate about and have written a bit about before. Instead of a wide look at the season’s tournament structure as a whole, this time around I thought I would focus specifically on the tournaments that are happening as we speak: League Challenges. I know that players have a wide variety of feelings on League Challenges, and it’s my hope that I’ll be able to address what I feel are the issues at the forefront of the community, and suggest improvements for future seasons.

For the sake of organization, I’m going to identify solutions to each problem that I feel exists, and then go over the pros and cons of said solution. Hopefully I’ll be able to shed some light on the ways I feel that LCs can be altered for the better, while at the same time being objective and taking the points of views of competitive players, casual players, Tournament Organizers, and TPCi themselves into account.

As I discussed in my previous article on the subject, I think one of the most frustrating things about League Challenges are that they exist in a space where players are ostensibly not supposed to take them seriously, but due to the fact that they award Championship Points, competitive players are basically required to test for, attend, and attempt to win as many of them as possible.

While this may not seem like an inherent problem, I do think that it introduces two very real issues into the community:

I believe that removing Championship Points from League Challenges would largely fix this issue. Competitive players wouldn’t feel compelled to travel to them, and in turn they would become much more casual events. However, because they would still be tournaments, newer or less experienced players would still get a taste of what it’s like to fill out a decklist, play at a proper pace, follow the minutia of the rules, and everything else that comes along with proper tournament procedure.

The only true downside I see to this plan is that LCs would be smaller, and that competitive players would have less to do over the tournament season. I would argue that both of those are probably positive side effects, though, as smaller tournaments make for a better stepping stone environment for new players, and it’s very easy to feel burned out as a competitive player.

Okay, so we’ve removed CP from LCs, leaving only the promo and whatever else your local Tournament Organizer decides to throw in as prizes. I think it’s safe to say that even the most casual of player would expect a little more from a tournament, especially if it’s one they’re paying to enter.

I propose that League Challenge promos become actual, relevant cards that have a place in tournaments. While I’m not suggesting that we’re given 1st place-stamped Shaymin-EXs anytime soon, I think making playable LC promos would solve a number of problems:

Obviously this system would need to be balanced so as not to have a great impact on TPCi’s bottom line, but I think there is a certain sector of the player base (especially among casual players) that would love to get their hands on playable cards with alternate art, alternate foil, or even just a 1st/2nd/3rd/4th place stamp.

Idea #3: Have a More Consistent Schedule

I was under the impression that League Challenges are to be held the same day and time as normal League sessions. However, it would seem that there are no restrictions in their scheduling, which in my opinion is a poor protocol for everyone involved.

While I understand that there may be issues stopping LCs from always being held at the exact same time and place as they’re supposed to be, I do wish that there would be some overarching consistency in the schedule, rather than having to talk to local TOs to start to understand what your area’s schedule will look like.

Lastly, a lot of competitive players seem to have a desire for League Challenges to be held on some number of sequential weekends, like Battle Roads once were. While I understand the reasoning for this and once argued for it myself, after examining the issue further, I think it’s important for LCs to (mostly) be held at times matching the schedule of a regular League session. The goal of LCs in my mind, if it wasn’t obvious already, should be to introduce casual players to the competitive side of Pokémon, and with any luck, have them become hopelessly addicted, as we all are.

As always, my intent for writing this article was to give clear, concise, and honest feedback on how myself and others players feel. I have the utmost respect for the TOs and judges that make these events happen, as well as everyone at TPCi who make these decisions behind the scenes. It’s my hope that this article will serve as constructive criticism rather than an attack. Pokémon is my favorite thing in the world and I want it to be as good as it possibly can.

Have any suggestions I missed? Agree or disagree with some of my statements? Let me know in the comments! 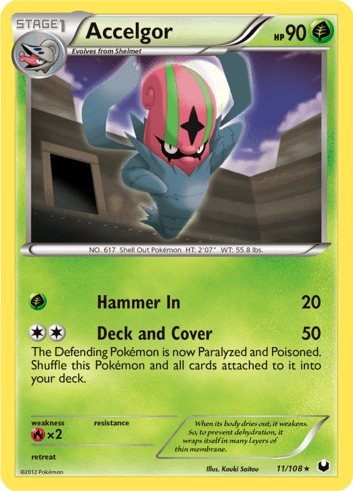