Hey SixPrizes! Long time no see. The last time we talked, I had been eyeing up Sableye/Garbodor for St. Louis Winter Regionals. At the last second, I ended up changing my mind and playing Toad/Bats, and I finished with a lackluster 4-2-1 record, catapulting me out of the top 16 Seniors in the US and Canada and into the biggest rut of my short-lived Pokémon career.

From there on out, I managed to begin clawing my way upward with a 1st place finish at the Nebraska State Championships, only to fall right back into irrelevance with a 1-3 drop at Wisconsin States and a Top 8 in Iowa, which awarded me 0 points, due to a low attendance. That was followed up with a 4-3 finish at Madison Regionals, which, although is certainly not bad by any stretch of the imagination, wasn’t a great as it could be, and failed to meet the expectations I had for myself as a player. I was down in the down in the dumps, wondering how I would maintain even a top 32 spot in US/CAN in order to receive a $1,000 travel stipend.

I made the short 3-hour trek to the Kansas Regional Championships in Overland Park with low expectations. In conversing with my good friends Nick Robinson, Josh Fernando, Sydney Morisoli, and Christopher and Alex Schemanske, I came to the conclusion that Yveltal was the play for me. This is the list I entered the event with, which is just 1 card off of the one Josh took to Edmonton Regionals, and the same one Nick played in Masters:

The list is fairly standard, aside from a few things, which I’ll go over here.

With Dark being the deck to beat from the past two weeks, we wanted Mr. Mime to protect us from things like Fright Night and Night Spear, not to mention the occasional Fighting deck, which we felt may see popularity due to the release of things like Carbink BREAK. I actually never played against the Dark mirror all day, making this card useless for me, though I still think the inclusion was warranted.

Xerosic was put in with the intention of remedying our shaky Fighting matchup. Although I never played against Fighting, I found it useful in getting rid of my opponents’ Fury Belts and the occasional DCE on a Seismitoad.

Parallel was a card that I wasn’t a huge fan of at first, but after my good friend Treynor Wolfe won Madison Regionals with it, I began to rethink the card. The ability to control my opponent’s board — when Silent Lab would be more detrimental than beneficial to me — was incredibly strong, and it did wonders to shore up my M Rayquaza matchup. It also did wonders to help my M Sceptile matchup, which surprisingly came out of the woodwork in Kansas.

After starting off 0-1, due to some unfortunate Prizes, I managed to end the day at 4-1-1, making me 5th seed going into Top 8. The next day I was going to be playing Seismitoad/Giratina, which was a matchup that I was extremely comfortable with. Unfortunately, however, my streak of luck would come to a bitter end.

Game 1 against my Top 8 opponent went exactly how it was supposed to, with me rolling straight through him. Game 2, I started with my Jirachi-EX and nothing in my hand. He didn’t really have much either, but he had a Laser so we essentially just passed back and forth until I lost the game.

Game 3 was even more unfortunate, however. My deck did exactly what it was supposed to do — aside from me having a couple of turns where I had Items clogged in my hand — but my opponent hit all but two heads on cards like Crushing Hammer, Hypnotoxic Laser, and Super Scoop Up throughout the game. In addition to this, my Keldeo-EX was prized for the majority of my game, making each failed Sleep flip more and more detrimental.

While it was unfortunate, considering I had good matchups throughout the rest of what would have been my Top 4 and Finals matchups, that is essentially what Seismitoad/Giratina is designed to do, and the weekend could have certainly gone much worse than a Top 8 finish, which secured my place in the top 32 Seniors of US and Canada, granting me a $1,000 travel stipend for US Nationals, just a few weekends from now!

Though a top 32 finish overall is nothing to scoff at, especially considering that this is my first full season playing, I often find myself reflecting on what I could have done better as a player. The next section of this article will revolve around the three points that I think are useful, not only for myself, but for all players to reflect upon.

1. Who’s to blame? Often, when I lose games, I try to find scapegoats, as opposed to acknowledging where I messed up along the line. As of late, however, I’ve been trying to figure out what I’ve done wrong, and how I can try to prevent unlucky situations in the future. With this in mind, though, I think it’s important to understand that Pokémon is somewhat a game of luck. No matter what you do, bad luck can strike, but it’s important to acknowledge what luck is responsible for and what you can do to manage it.

Take my Game 2 in Top 8 for example: I was put in a position where I had absolutely nothing, and I had to pass until I lost. Could I have done more? Absolutely not, because otherwise I’d like to think I would have.

Now look at my Game 3: My opponent managed to get a lot of Crushing Hammer, Super Scoop Up, and Hypnotoxic Laser heads. What more could I have done? Could I have not been so liberal with Energy attachments, or maybe better utilized Yveltal XY to keep my Energy in play? Could I have taken better advantage of Fright Night Yveltal so that a single Super Scoop Up wouldn’t have set me back multiple turns? Could I have been more conservative with AZ plays, so that I had an out to Sleep if need be? These are all things to consider in my case, and I’m sure almost everyone reading this can find a similar way to reflect on their matches.

2. Were my “perfect deck choices” really all that perfect? One common thing that I hear not only out my mouth but from almost all players at one point or another is something along the lines of, “I picked the perfect deck, I just hit my one bad matchup.”

At Madison Regionals, I opted to play Night March under the implication that because Yveltal was the big winner from the previous week, it would see a lot of play, along with decks like Rayquaza, which hold positive matchups against Yveltal. What ended up happening, however, was that there were seven Seismitoad decks in the room, five of which went on to Top 8, with two of them losing there, one losing in Top 4, and two in the Finals. I faced three of these seven decks, with me beating a Seismitoad/Giratina and losing to a Toad/Bats and a Toad/Tina, along with the Round 1 loss I picked up from Sableye/Garbodor.

3. Lastly, life will go on. Although it’s painful to think about what could have been, it’s important to keep in mind that Pokémon is just a game, and we all play because we enjoy it. I’d love to be able to say that I won a Regionals, but I could’ve had a far worse season. I have my Worlds invite at 610 of the necessary 250 points to qualify, and I had fun obtaining it. At 22nd place in North America, just 30 points shy of top 16, I think I had a strong season, and although it could have gone just a bit better, it also could have gone a lot worse.

Hopefully these are some things that you can all reflect upon and find solace in, and maybe even better yourself as a player in doing so. As of late, I’ve been making an effort to reflect on these things, and they’ve been such an amazing help in allowing me to not feel so discontent about how things have gone for me this year.

Thank you so much to everyone who read this article! Hopefully by the next time we talk, I’ll have some success stories from Nationals and be able to give some strong foresight for Worlds. As you all probably know by now, the 11th XY expansion, Steam Siege, will be legal for Worlds. This is the first time that an August set has been legal for Worlds, and it’ll surely make for an interesting format. Don’t forget to like this article if you enjoyed it, and let me know what you think. See you all soon! 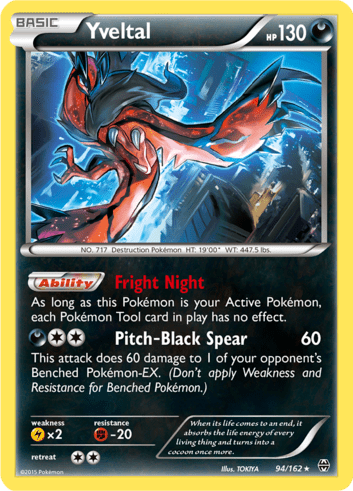