Hello SixPrizes! My name is Jacob Tolliver and today I am a player from the Washington, D.C. area. With Orlando Regionals just around the corner, it is important to leave no stone unturned. Greninja BREAK recently placed both first and top 4 at Phoenix. While Standard is vastly different from Expanded, the power of Greninja remains. Today I am going to talk about Greninja and the card choices it has in the Standard format.

Before diving into Standard, it is important to learn what we can from Phoenix. The stakes have never been higher, and Orlando is the first major Standard event of the season. As you will see from the list below, Drew Kennett’s winning Greninja BREAK deck features only five cards exclusive to the Expanded format! With Greninja losing next to nothing from the format change, there is a lot we can learn from Drew’s list.

There are a few things from this list I want to point out. Firstly is the Supporter line. Running two Ace Trainer is a great idea, especially given that in most situations we do not want to shuffle into the deck until after a Water Duplicates. After Frogadier gets Knocked Out, Ace Trainer becomes a live card and puts a damper on our opponent’s momentum.

The next card of note is Teammates. Being able to search out the crucial pieces needed to finish out a match is great, especially if you are on the back foot. One example is being able to grab a Rare Candy from the deck, a card Drew plays two copies of. Generally a second Froakie is evolved into a Greninja with the first Rare Candy early on in the game. The second Rare Candy allows skipping Frogadier in the late game as well, helping stream attackers against hard-hitting decks. Two Rare Candies also safeguard against prizing too many Frogadiers, giving us one more option to get Greninja going.

The Pokémon lineup is very straightforward. Running three Froakie, rather than four, helps maximize the times we start with Talonflame, a card that makes this once clunky deck run like a machine. While three BREAK used to be on the high end, I believe it is needed now, especially moving into the Standard format. With Talonflame boosting consistency to an all-time high, getting multiple BREAKs out onto the field is commonplace.

The final facet I want to mention from Drew’s list is the lack is Pokémon Ranger. Pokémon Ranger is used to remove the effect of Shadow Stitching in the mirror, however Drew did not choose to run it. He ended up playing the mirror in top 4, and his opponent did not run it either. The important takeaway is that running Ranger just for mirror is not worth losing consistency in a deck that relies on not missing a beat.

The State of Standard

Right now in Standard there is no best deck, but instead a lot of tier 1 deck choices to choose from. These include Rainbow Road, M Mewtwo, and Yveltal to name a few. To get a better idea on the Standard format holistically, I recommend reading Russell’s, Alex’s, and Grant’s articles. In Orlando I would not be surprised to play a different deck each round on Day 1, due to how open the format is.

So where does Greninja fall? While the deck is inherently powerful, it does struggle with a few archetypes. The list I have been testing has even to positive matchups across a majority of the field, with a few noted exceptions. With the exclusion of Jirachi XY67, M Rayquaza and Rainbow Road are both difficult. Garbodor is also an issue for Greninja, but I aim to fix that with the list below.

In the Standard format, there is a lot Greninja needs to account for. The biggest reason to not play Greninja is Garbodor. Without Startling Megaphone or Xerosic, there is no good way deal with Garbotoxin. In order to stay in the game, we play a heavy count of Bursting Balloon. This card allows us to 2-shot Mega Evolutions instead of three, giving us a solid chance at winning the game under Ability lock. Lysandre also made the cut because with the help of Talonflame it is easy to set up a two-turn knockout. While this is a slow answer to Garbodor, in most games it will not be necessary. Also, if Talonflame chips an Active Trubbish for 40 in the early turns, Lysandre allows us to deal the additional 60 required to Knock Out Garbodor.

The reason I do not include any copies of Rough Seas right now is because most of the format either one- or 2-shots Greninja BREAK. Rough Seas does not affect the math on the decks that 2-shot until multiple turns have passed, and I am trying to take a more proactive approach in the game. Most decks have returned to playing two copies of Lysandre with the loss of Battle Compressor, and Rough Seas will be used in vain a large percentage of the time. Rough Seas is useful against Yveltal and Volcanion, but I do not think Greninja needs any help in those matchups. With huge Mega Evolution Pokémon like M Mewtwo being popular choices in Standard, Faded Town becomes a strong choice. Putting chip damage on the Active and Benched Mega Evolution Pokémon plays a huge role in having large swing turns, especially under Ability lock.

Still wanting to deny 2-shots on my Greninja BREAK, I opt to run a Max Potion. This allows me to remove damage instantly instead of being susceptible to Lysandre. I only run one copy as it is important to keep early-game consistency a priority. With a high count of N and Ace Trainer, I am confident that Max Potion will stay in my deck until I need it in the late game. If you prefer Rough Seas, you could cut this card for a third one.

In comparison to Drew’s list, I run one less basic Energy. This is replaced by a Professor’s Letter. There are many uses for this versatile card, which is why I believe it deserves a spot in the list. Early game it can grab a Water for both Talonflame and Frogadier, allowing Aero Blitz more freedom in grabbing a Rare Candy to evolve the second Froakie. In the late game it can grab the W Energy you need to win after your opponent plays a big N. Finally, Professor’s Letter can grab an extra card to discard with Ultra Ball, while still functioning as a 9th Energy.

Running a higher count of Ultra Ball instead of Level Balls has a few merits. Besides discarding Talonflames out of the hand, we want to put our one of Supporters into the discard pile to access with VS Seeker. As the game progresses, thinning our hand increases the odds to finish out the game off of a late-game N. Greninja is essentially a combo deck once it gets set up, and being put down to 1-2 cards can be game-changing.

The loss of Sacred Ash is unfortunate, but instead I run two Super Rod. It can shuffle both Energy and Pokémon back into the deck, and because it shuffles a combination of three, we can avoid shuffling Talonflames back into the deck. There is a consideration to include Karen in the deck, but the thought of shuffling potentially 4 dead cards back (the Talonflames) is enough for me not to run it.

With Greninja having so many options for how to run it, your build depends on the metagame you expect to face. Below are some other options on cards to play inside my style of Greninja, with reasons why they did not make the cut, and how to fit them into the deck.

Jirachi XY67: This card is critical in both the M Rayquaza and Rainbow Road matchups, with the latter being extremely difficult if they play Fighting Fury Belt. The reason I am not running it is adding additional Basic Pokémon to the deck will lower the consistency of starting Talonflame, a Pokémon we desperately want to lead with each game.

Hoopa STS: This card can be used after dealing 80 to a Garbodor in order to take a knockout without needing two Lysandres. Once again, adding Basic Pokémon into the deck is very detrimental to our strategy, and Garbodor is not a huge threat on its own.

Skyla: Skyla is most useful in guaranteeing turn 2 Water Duplicates, but Talonflame already has that covered. Outside of this situation, it is overshadowed by Teammates.

Wally: With Talonflame taking care of the early game, this card is useful to rush a BREAK out, or rebuild your board in the late game. If I were to add this in I would replace a Rare Candy for it.

Karen: As stated earlier in the article, shuffling in Talonflames hurts the deck’s consistency in the late game.

2nd Fisherman: The main reason for running a second Fisherman is with the worry of prizing the first one. If it is not one of the last 2 Prizes, I am confident the Energy count and two Super Rod are sufficient to get through the game without worry. Another factor is with Garbodor having dominance in the format, we won’t be using Giant Water Shuriken during all stages of the game.

Pokémon Ranger: While winning the mirror is nice, Greninja is a deck that requires consistency. While playing a Ranger-less mirror is a nightmare, both Greninja decks that placed high in Phoenix did not play Ranger, and I agree with their decision.

Energy Retrieval: This is a great option for the deck, but I feel that it is weakened by the presence of Garbotoxin. Playing two Super Rod and a Fisherman, I am not concerned with finding W Energy in the late game. If I was to play a second Fisherman, I would consider adding Energy Retrieval instead.

Level Ball: If I made room for a 7th Ball search card (currently I run 4 Dive and 2 Ultra Balls), this would be the seventh card. It is great in finding Froakies early on. I would consider cutting an Ultra Ball for one, and potentially an additional card for a second (while keeping one Ultra Ball).

Buddy-Buddy Rescue: This card has slight advantages over Super Rod, in that the Pokémon comes directly to the hand. I would consider adding one over a Super Rod if I played another way to recover Energy.

Silent Lab: When choosing to not run Rough Seas, I decided between Silent Lab and Faded Town. Silent Lab boosts the matchup against Rainbow Road and Volcanion, and can also help against M Rayquaza. Ultimately I found Faded Town to be amazing in testing, and it depends on what you think you will face in Orlando.

Splash Energy: While Splash Energy is great, especially on your first Frogadier, I felt that playing a second Super Rod is more important.

More Water: 8 Water with a Professor’s Letter is great in the current format. I would not want to go lower, but could consider going higher. If I was to increase the Water count however I would have a hard time not adding a Splash instead.

With Orlando just around the corner I wish you all the best of luck if you are attending. I will be there, and if I play Greninja it will look very similar if not the same as the list shown above. The deck is incredibly fun and rewarding to play. Losing virtually nothing from the jump from Expanded to Standard, Greninja’s power level stays the same while the rest of the field loses key cards. Garbotoxin does hold it down, but Greninja will rise once again during this season. If you have any questions or comments, I am more than happy to respond. Thank you for reading and have a great day. 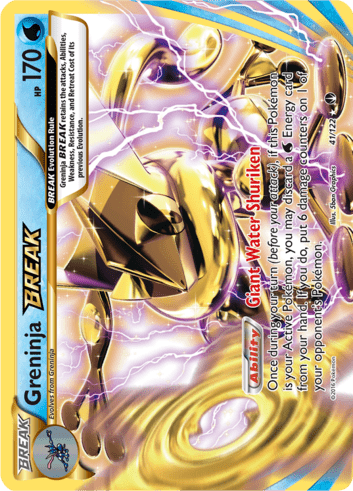