Hi SixPrizes, it’s Joe again with my second article, and this time around I will be showcasing Night March. Lots of people have assumed that with the release of Karen, Night March will be dead, but this article will show you why it certainly is not.

Let’s start by taking a look at the Expanded meta after Phoenix Regionals and before the release of Karen, which consisted mainly of the “Big Three”: Dark variants, Trevenant, and Greninja. After Karen’s release, however, the meta will change tremendously.

Since people are now largely disregarding Night March because of how bad Karen is for the deck, Trevenant loses one its main selling points (its strong Night March matchup), and therefore will not be played as much. Dark gains credibility since it no longer has to worry about troublesome Night March encounters, and in turn that makes Trevenant an even less attractive play since Dark will conceivably become more popular.

The Expanded Meta After Karen (in no particular order)

Some of these decks are likely to play Karen, and others will omit her.

The decks that we do have to worry about playing Karen are pretty much all Sky Field decks, such as Mega Rayquaza, Rainbow Road, and Raichu. Of those matchups, Rainbow Road is easily the worst. Other decks that may play Karen are Trevenant and Greninja BREAK. Night March still has a bad matchup against Trevenant regardless, though Greninja definitely becomes a harder matchup if they do play Karen.

Other than Trevenant, Rainbow Road, and Greninja (with Karen), however, all of Night March’s other matchups are very acceptable.

Mega Ray is one of Night March’s best matchups because Joltik hits for Weakness and the Prize trade is so much in Night March’s favor, not to mention it takes less resources for Night March to get 2 Prizes than it does for Mega Rayquaza to gain 1.

The other great matchup Night March has is none other than the BDIF, Dark. Night March has historically had a good Dark matchup as Joltik hits for Weakness on their main attackers, Yveltal BKT and Yveltal-EX. Night March is also able to trade well as Dark plays more EX attackers.

The problem about Karen is that, unlike Lysandre’s Trump Card, it does not shuffle back in your Battle Compressors (which are the main method for getting your Night Marchers into your discard) so to combat that we can play Milotic to get our Compressors back when we need them.

Milotic is extremely helpful for post-Karen Night March, allowing it to get back Puzzle of Times, DCEs, and Battle Compressors. You are going to need to play as many Battle Compressors as you can because against Karen, your Night Marchers will constantly be shuffled back in.

Mr. Mime is needed in this variant because we only play 1 Fighting Fury Belt and also have to worry about Feebas getting sniped. With Dark being the BDIF and Darkrai-EX filling up 1-2 slots in almost every list, you are extremely susceptible to Night Spear. Pitch-Black Spear from Yveltal BKT is something that is also an issue for our deck.

With no counter to Jolteon-EX natively in this deck, Pokémon Ranger is very much needed. It can also help if you find it against Seismitoad variants. AZ is very strong card in here because it allows you to reuse Milotic’s “Sparkling Ripples” Ability, and it is another switching card in addition to Float Stone.

Most Night March lists play 2-3 Fighting Fury Belt, but with Karen I play Silver Bangle because you simply won’t have as many Night Marchers in the discard and the extra damage is helpful.

Night March generally has a strong Dark matchup as it trades very well with their attackers. Most Dark lists will not be playing Karen because it does not flow as well with the deck. Playing Milotic makes you more consistent and can help you find key cards when you need them. Mr. Mime is extremely helpful as it doesn’t allow their main two attackers (Darkrai-EX DEX and Yveltal BKT) to be as effective. Be careful though because more and more Dark lists are starting to run Silent Lab.

Mega Rayquaza is the one deck that is almost guaranteed to play Karen. Mega Rayquaza plays a bunch of 1-of Supporters and Karen fits in perfectly. Joltik hits for Weakness on almost all of their Pokémon and if you can find/reuse 1-2 Battle Compressor you will be able to Knock them Out with one attack.

This deck will also most likely play Karen, which can make the matchup very difficult. The matchup is tough because Xerneas are very beefy 1-Prize attackers with Fighting Fury Belt equipped. It can be extremely difficult to deal 160 damage to a Xerneas after they have just used Karen. We run a copy of Startling Megaphone which can be helpful if we hit for 120 or above but are a still below the 160 needed on a Xerneas.

If your opponent plays a Karen and follows it with a Quaking Punch then you are almost guaranteed to lose if you cannot break the lock. However, if they do not play Karen the matchup isn’t that bad if you have a strong first turn and are able to get 9 or more Night Marchers in the discard pile.

Another way to deal with Karen is to play other strong DCE side-attackers (that aren’t Night Marchers) such as Gallade.

Gallade can buy you much-needed time when your opponent has just used Karen. Gallade is a very beefy 1-Prize attacker that can take out a Darkrai-EX with a Fighting Fury Belt, which was already very hard for Night March to kill, in one hit. Gallade + Target Whistle on a Shaymin-EX is also a play that is commonly used.

Most Night March lists run 3 Shaymin-EX but this list doesn’t have the Bench space for the third. Jirachi-EX is much needed in this list as it lets you get Gallade in play turn 1 much more frequently.

Seismitoad-EX serves many purposes in the deck. First off, this list has more trouble than most with hitting 1HKOs every time, and with Karen messing up the math even more, Seismitoad-EX is good situations where Quaking Punch would be enough to fill in the missing damage for a Knock Out. The other reason we play Seismitoad-EX is because when a Karen is used, we can follow up with a Quaking Punch so our opponent can’t play VS Seeker for another Karen, which then allows us to set up more Night Marchers in our discard.

We don’t play AZ in this list and instead play Escape Rope since it can serve as a soft Jolteon-EX counter.

Special Charge is very much needed in this list because you will often find yourself using Puzzle of Times on Battle Compressors instead of Double Colorless Energies.

This matchup is very much in your favor, especially since most Dark variants won’t play Karen and you trade Prizes very well with them. In this matchup, their main attacker is Darkrai-EX to try and snipe your low-HP attackers on the Bench, but since you play Gallade, you can easily combat their Darkrai. Gallade is also a good attacker against baby Yveltal and Yveltal-EX as Gallade’s massive 150 HP and low Energy cost make it very hard for Dark decks to Knock Out, often trading 2-4 Prizes for 1.

Greninja is one of this deck’s toughest matchups. If Greninja does not play Karen, then the matchup is 50-50. If you are able to stream Hex Maniac + a knockout every turn they have a Water Shuriken or Giant Water Shuriken available, you should be able to win. However, if they have a turn where they are able to fire off a bunch of Shurikens, you can easily go from a very commanding position to a very poor position in the matter of one turn.

If Greninja does play Karen, your main attacker sadly becomes Gallade. If you try to keep streaming Night March attacks, you will lose either because A) you aren’t able to use Hex Maniac and get enough Night Marchers in the discard pile or B) you will simply deck out. Therefore, Gallade becomes your main attacker, which is not ideal since you cannot 1HKO a Greninja BREAK and they can easily Knock you Out. Not to mention that you have to use Maxie’s Hidden Ball Trick to even get your Gallade on the field in the first place.

Although Mega Rayquaza plays Karen now, this matchup still stays strong, but it’s not as strong as it used to be. It is still very easy for Night March to overwhelm Mega Rayquaza on turn 1 and take a very early Prize lead. It only takes 6 Night Marchers or 4 Night Marchers + a Silver Bangle on a Joltik to get the 1HKO on a Mega Rayquaza, which is easy to accomplish even if they play Karen.

This matchup, like Greninja, is one of Night March’s hardest. Since most Rainbow Road lists will play Karen, it is easy for them to shuffle all of your Night Marchers back into your deck while attacking with their high-HP, non-EX attacker. Gallade will then resort to being your main attacker, which is not ideal since it won’t even 1HKO a Xerneas that has a Fighting Fury Belt attached. Your only way to win this matchup is to hope you can stream Target Whistle + Lysandre + Sensitive Blade to Knock Out their Shaymin-EXs repeatedly.

The Seismitoad matchup can often go either way. The key to winning this matchup is a turn 1 Gallade and your 1 copy of Pokémon Ranger. T1 Gallade helps tremendously against Seismitoad variants because it allows you to manage your future draws to help mitigate Quaking Punch.

First of all, I would like to give a huge shoutout to one of my testing partners, Nick Conocenti, for helping me create these lists and test their matchups.

Night March is most definitely still a strong deck, even with Karen in the format. It’s one of the only decks that has a favorable matchup against Dark, which is extremely appealing and one of the reasons the deck is so strong. There are lots of different ways to play the deck, and I feel that these two variants are the most viable with Karen now in format. 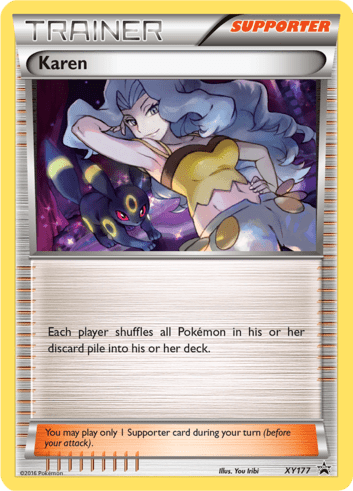