In the last few weeks, there have been a few conversations on Facebook groups about the merits of and problems with publicizing players’ decklists during livestreamed tournaments. The discussion got quite heated between a few members of the community and strong arguments were presented all around. Even this past weekend, one player tried to prove his point by revealing his decklist for a League Cup before the event started (more on that later).

For today’s piece, I want to not only lay out the different stances being taken and my personal opinion, but also discuss instances in recent years where the Pokémon.com website has revealed decklists during major tournaments.

A small disclaimer before we begin; this piece will be an opinion piece. While I do intend to lay out the facts and arguments from the opposing sides, my own bias will likely be apparent. The point of this piece is to stimulate discussion, so if you have any thoughts or criticisms, feel free to chime in on the forums!

About a week ago, Jeremy Jallen posted in HeyFonte, a competitive Pokémon discussion group on Facebook, asking the community how they felt about featuring their decklists on a livestream in the middle of the tournament. He was gearing up to host a stream of the Dallas Regional Championships and looking for interesting content to provide for the viewers at home.

Many players in the Pokémon community, myself included, love watching streams of tournaments when they can’t attend themselves and usually want to receive as much information as possible. Presently, we usually see pictures of standings hitting the internet on social media within 1 minute of their physical posting at major events, along with a full list of the 32 or 8 decks that are being piloted in that phase of top cut following shortly thereafter.

Jeremy was hoping to go above and beyond the normal event coverage that a third party stream typically provides. After the official Pokémon stream for the International Championships in London upped their coverage of players and decks, this would be a good way for the Dallas stream to shine.

Speaking of the London stream, it actually was one of the first official Pokémon streams to feature decklists from competitors while the event was still taking place. After most streamed matches, the decklist of the winner was displayed on the screen (built out in the Pokémon TCG Online client) and discussed. My own decklist was actually featured after my loss in R10, unbeknownst to me until a few days after the tournament. Interestingly enough, although there was a TV showing the stream in the London venue, the stream team chose to keep the monitor off for these sections, probably so competitors would not have an unfair advantage.

Anyway, after Jeremy posited this inquiry, players started chiming in with their opinions. Here are the major arguments from each side:

In Favor of Publicity

One of the main arguments for publicizing lists on stream during a tournament is that it makes streams more entertaining to watch. In turn, when streams are more entertaining, players who randomly tune into them more interested in actually picking up the game. As the game gets bigger, there are more potential opportunities for sponsorship, larger prize pools, better events, etc. While the game is going through some growing pains right now, I’m confident that Pokémon as a whole will figure out how to run big events successfully in the near future. At this point, we will all appreciate any influx of players who make events bigger.

Another argument is that other, more successful card games have already implemented this in their event coverage. In Magic, any event that has a stream will completely publicize the Top 8 decklists before Top 8 starts.

In addition to that, at Grand Prix tournaments, the organizers will hand each player a print-out of their opponent’s decklist before each game in their Top 8 set. This is done so all players have full access to any information that could have been gathered by a friend watching the stream at home. No competitor gains an unfair advantage this way and the playing field is level.

One player, Eric Gansman, even felt so strongly about publicizing decklists that he posted this on Facebook before a recent League Cup. He argued that having your decklist as public knowledge doesn’t even matter. Players won’t be able to significantly change their game plan by knowing what you do or do not play in your deck, and even if they could, they’d probably be able to figure it out during their game or potentially from a friend who played you earlier in the tournament.

While I find this approach to proving a point to be rather brash, I do understand where Eric is coming from. It’s very hard to keep a tech card or a card count secret during tournament play, especially in a best-of-three setting. Even at large tournaments, my friends and I will try to inform each other of any interesting techs we know that people are playing and keep tabs on especially interesting counts of cards like Hex Maniac or Pokémon Ranger that could come in handy if we encounter the player later in the tournament. The information will get out eventually, especially if you make it to the later phases of a tournament.

Maintains the element of surprise.

The other argument is that Pokémon should not be publicly revealing any decklists of players until the tournament is completely over. The brunt of this argument is that surprise tech cards and card counts play significantly into many matchups. In a single game of Pokémon, every card in your deck could come into play because of the sheer amount of search and draw that have been in most formats.

One recent time that this surprise factor has come into play on a larger level was at Nationals 2015 when Enrique Avila took 2nd place with his Wailord mill deck. At this event, many players knew about the deck but few knew how to play against it, let alone the exact list for the deck. This element of surprise for playing such a rogue deck carried Enrique to the finals of Nationals, where he ran into Jason Klaczynski. Jason was playing Seismitoad-EX/Garbodor, a typically strong matchup for the Wailord deck.

Unlike most of Enrique’s opponents, however, Jason was able to test against Enrique’s exact list to figure out the matchup the night before the Top 8 cut. Pokémon chose to post “popular” decks from the tournament — Wailord included — on the website the night before so Enrique’s deck no longer had any surprises left for Jason.

While it’s not a sure thing that Enrique would have won had Jason not known his list, it is fair to say that he had a much easier time with the matchup by getting this practice in.

Pokémon should not blindly follow Magic; it is a different game with static decks.

Another part to this argument is that other games like Magic have sideboards, meaning that your deck has some dynamism. Even if your opponent knows every card in your list, there is a chance that you could switch a few cards out between games to better prepare for the matchup.

Since Pokémon doesn’t have this, your opponent will always know the exact counts of every card in your deck if they know your decklist. Because of this difference, you can’t blindly follow a game like Magic, even though they’ve seen success from the way that they run their game.

Personally, I am in favor of having decklists completely secret for the entirety of the tournament.

I have had many conversations about how thrilled I am that we have a great livestream at many Pokémon tournaments, and I’m very passionate about the growth of this game. However, I don’t believe that delaying the release of decklists would hinder the effectiveness of a stream or the coverage of an event as a whole.

One of the problems with the argument for publicizing decklists is where do we draw the line with publicity?

It’s a sticky situation that Pokémon needs to address before continuing to profile exact decklists on their stream.

One option which Pokémon actually employed with the stream at Nationals 2016 is to discuss a standard or “cookie-cutter” version of the deck that was just on stream, not the exact list itself. After each game, the commentators opened up PTCGO and pulled up a pre-made list that was similar to one that was played on stream. They didn’t talk about the exact decklist, nor did they try to pretend that they were. This way, the viewers got a good idea of most of the cards in the deck as well as how the deck works, without revealing the secrets of the deck’s creator.

An Essence of Gameplay

Creativity is a big part of this game. I often play interesting techs in my decks, from Pokémon Ranger to deal with Jolteon-EX in my Night March list to a high count of 3 Max Potion in my Landorus/Garbodor deck back in 2013. If my opponents knew about this going into each game, they would play differently. Not only does it matter if they know that you play a card, but knowing exactly how many can influence their decisions as well. This level of uncertainty has been a part of the game for as long as it has been around and I enjoy the next-level thinking that it encourages on both sides of the table. For me, this secrecy is part of the game.

Consent also comes into play when arguing for keeping decklists private. As it stands now, players have no say in whether or not their decklist will get posted. Since the introduction of the official stream at some Regionals, the rules have changed and players are typically not allowed to decline to be streamed. Similarly, decklists become “public knowledge” in the eyes of the Tournament Organizer or TPCi once the tournament has begun.

While some players have no problem with their decklist being revealed, be it on stream like in London or on the Pokémon website, others would rather keep theirs secret for as long as possible. By instead giving players the choice of revealing their decklist or keeping it private, you could potentially satisfy most of the player base.

The Pokémon TCG has gone through a significant period of growth in recent years and is seemingly still working out the details on when and how to handle sensitive information. There is a delicate balancing act going on between providing information to the viewers at home and also keeping the stream as interesting and engaging as possible. In the end, it is all but impossible to satisfy all players and viewers at the same time, so TPCi will likely do whatever benefits itself the most.

What do you think? Should decklists be publicized before, during, or after the event? Or not at all? Should players have a say in whether or not their decklists are posted on the Pokémon website or should the tournament organizers have the final say? Pop on over to the forums to discuss; I’m interested in what you all think. 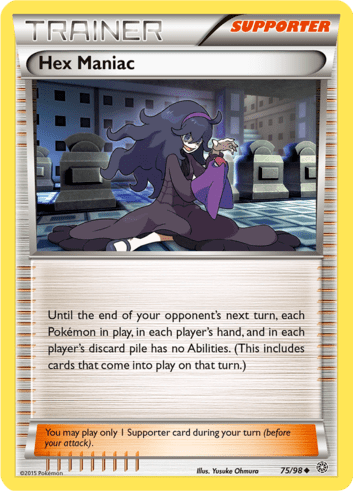