Hello everyone! I am here today with an article dedicated to my favorite deck in the Standard format: Gardevoir/Sylveon. I spent a good part of my last article on this deck, along with Golisopod and the matchup between them. I received a lot of positive feedback on the article, especially on the Golisopod vs. Gardevoir section, so I figured I would dedicate an entire article to something like that. I hope you enjoy and please give any feedback or criticism!

Over the weekend I posted in HeyFonte what I consider to be the “definitive list” for this deck right now. I think I ruffled some feathers by sounding a bit too arrogant. Now, I am not so conceited to recognize that we can’t make some changes to the list and appeal to players’ personal preferences and play styles, so I will discuss possible changes. With that said, I will also give my reasoning for why I think the list is optimal. I have not felt so confident in a list in a long time! First, though, let’s look at some recent results to give some justification behind my claims.

Before my last article, Lex D’Andrea beat me in Top 8 of a League Cup, going on to win the event. I took his deck and won the Cup the next day. I spent the next two weeks testing out little changes in the list to get to a more refined list for Hartford. We ended up changing only a few cards and you can see the list we ended up playing: Sam made Top 4 and Pablo made Top 16 with one card different. Myself and our other teammate Spencer Nalle played the same list as Sam, with Spencer getting Top 32 and myself going 5-2-2 for 103rd place. Here were my matches in Hartford:

Between my teammates and I, we agreed I had the toughest schedule. I was very fortunate to go 2-0-1 against Metagross, but taking the losses to Espeon/Garb and the mirror were unfortunate. In both of those sets I had one game where I drew/passed and lost a quick game, splitting the other two close games. In my game three against Noel, I made the mistake that ended up costing me the tournament: I went first and got T1 Brigette and Energy to a benched Eevee to get Sylveon. He T1 Brigette’d as well. I used Guzma to bring up a Ralts, attached DCE, and took a KO. In his three card hand he had Candy+Gardevoir+Sycamore into Fairy+DCE+Choice Band to KO me, and I fell too far behind in the game. I got a bit greedy there and should have just used Magical Ribbon to set myself up.

One quick note about my ties and ties in general right now: I felt incentive to tie in both round two and round nine. In round two, I lost the first game to an unfavorable matchup, so I kept my pace of play consistent but not overly fast. I was happy to walk out with a tie. In the last round, I knew a tie would guarantee me points, and though I would have likely won game three, I was happy to just receive points at that point. Going forward, if we continue to have these 700-900 person Regionals where you need to go 7-2 to make Day 2, I think this mentality may be outdated. Even against Metagross, perhaps I should have just gone for the win or loss by playing faster. Something to think about for sure.

Though my Hartford run ended a bit lackluster, I was excited to have the opportunity to cast some games on Day 2 with Cora, a well known Hearthstone caster. I had a blast casting and would love to get an opportunity again in the future to commentate. (Check out the VODs here and here).

This past weekend, I convinced my girlfriend to go to a Cup with me down in Maryland (she lives in Baltimore) as a compromise for not traveling down to Daytona. She ended up being a good luck charm! (Also shout out to Brent Halliburton for teaching her to play!) I won the event, playing my teammate Spencer in the finals, using 58 of the same cards. Here were my matches on the day:

It seems like many others have found League Cup success with some form of the list as well, such as Kyle Sabelhaus winning one this past weekend as well. He used the same 60 I did on Saturday, which now looks like the following:

While I think this is the most streamlined, optimal list, we can consider tailoring the deck to specific metagames and/or preferences. Let us first look at what cards we can potentially cut, then what we could add.

I have a strong opinion that Octillery is the better card in this deck. While Oranguru certainly has its upsides (a Basic, a secondary non-EX/GX attacker), Octillery lets you see so many cards throughout the course of a game, match, and tournament. Though I have always favored Octillery, this became crystal clear to me when I played against Xander in some testing games. When I was using Oranguru, Xander beat me 3-2 using Ho-Oh/Salazzle. After I switched to Octillery, I went 3-0 against him.

The Fire decks put on so much pressure that you need all the extra cards you can in order to keep pace. While this may be the extreme example, this philosophy extends to other matchups as well. Volcanion and Golisopod can put a lot of pressure on and in the mirror there are turns where you need to find a bunch of cards to get a return KO. Octillery also lets you play late game N’s with even more insurance and without needing Gallade to find the pieces you need to close out the game.

With a single Brigette, you naturally open it about 12.6% of the time. With two Brigette, the percentage jumps to almost 24%! (source) Being able to start with a Brigette without having to search out Tapu Lele in one out of four games or so is quite amazing and is the biggest selling point for the extra copy of Brigette. It obviously has the added benefit of now prizing both Brigette 1/100 games instead of 1/10, but that is not as important as the huge jump in starting with it naturally.

Finally, out of all decks in the format, I think this deck has the most incentive to play an extra Brigette. Since we play Sylveon, it can more readily Brigette with no other Supporters in hand, as we can Energy Evolution into Sylveon and grab a Supporter on our first Magical Ribbon. Our opponent will often even N that away, giving us a free hand without wasting a supporter!

One of the most difficult components of playing this deck is choosing the correct cards on Magical Ribbon. Though sometimes the picks are obvious – you have a Gardevoir in hand, three Ralts on the bench, so you grab Candy, Candy, Gardevoir – many times they are not. I wish I could give you some hard and fast rules for choosing cards using Magical Ribbon, but this is something that will have to be figured out through testing. That said, here are a couple things I find myself commonly searching for:

In other card games, such as Hearthstone, decks are often classified as “Aggro,” “Midrange,” or “Control.” In general, Aggro>Midrange>Control>Aggro. In Pokémon, this does not appear quite as much, as the game is all about tempo. However, we can still see some examples of this (ex. Volcanion would be considered an aggressive deck while something like Accelgor/Wobbufett would be considered a Control deck). One of the amazing things about this Gardevoir deck is that it can take on the role of both the aggressor or the control deck, thanks to Sylveon. Keep that in mind as you read through the matchups and play your games—if you are playing against an aggressive deck (i.e. Volcanion), you will want to adopt a slower, more control-style of play. However, against other slower decks (i.e. Metagross, Greninja), you will want to start putting the pressure on early with Sylveon and clean up later in the game with Gardevoir.

The last three matchups I have less experience with, but I will give a few tidbits of information from my limited testing.

Though there are other matchups in the format, I think these are the key ones to be aware of going into Vancouver.

The end of a format is always bittersweet: decklists have finally been optimized, but then we need to look toward the new set. In this case, we have two new sets to consider! I have not looked too much into Shining Legends or Crimson Invasion just yet, but Zoroark-GX looks to obviously be a big change in the format. Crimson Invasion will bring Counter Energy and a slew of new Trainers which will also certainly shake up the format and how we build decks. The winter season looks to be quite interesting.

I will not be attending any major tournaments for awhile now. None of the winter Regionals are particularly close to me, and while I enjoy playing in big tournaments, I need to weigh the travel and time costs associated with traveling to these big events. I have 170 points already, so I just need to consistently place in League Cups for the rest of the year and I should hit my 400 points without much difficulty. It is looking like St. Louis, North Carolina, or Portland could be one of my next Regionals. I will certainly be in Roanoke in May.

I hope you enjoyed my Gardevoir analysis. Good luck to those playing in Vancouver—I highly recommend this deck and would obviously play it if I were going! 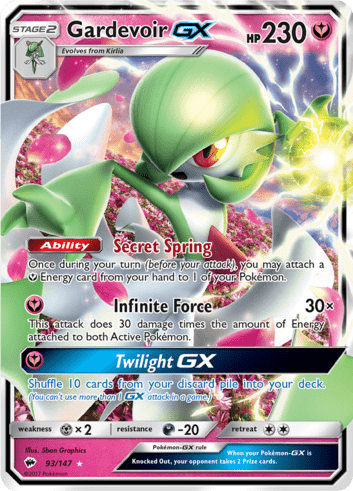