Hello 6P readers! As you are reading this we are only a few days away from the Dallas Regional. After Memphis I generally didn’t think that there would be a bigger Regional than that one, however this one seems to be the next “biggest Regionals ever,” and now I wouldn’t be surprised to see this trend happen at every upcoming Regional from now on. I love this game and I love the community, so I’m really looking forward to that competition that will take place in Dallas.

The biggest question hanging over everyone’s heads: what do I play at their biggest Regional ever? Do I play something consistent that will guarantee me points? Do I play something spicy that is high risk and high reward at the same time? It’s been really hard for me to determine what is the best deck or the best play for Dallas, but one thing I know for certain anything I end up playing will for sure have Zoroark-GX.

We are starting to see Zoroark-GX get some play in literally every combination possible. We’ve seen the common Alolan Muk, Lycanroc-GX, or Golisopod-GX but now we are seeing Magnezone PLS and even Vileplume AOR! The consistency it adds to every—and any—deck is quite clear, and this is why all sorts of different cards and techs are viable when combined with it.

The reason I’m starting to like Zoroark-GX so so much is the following:

Zoroark allows you to see more cards than ever during your turn and therefore you are able to access more resources.

This means your deck will be performing what it’s intending to do more often throughout a tournament. Having these huge 10 or 12 card hands means you’re not struggling to find the cards you need each turn. Instead of hoping you hit them, you can take educated guesses that you will find them, and therefore games come down more to decision making and resource management than “luck of the draw.”

Brit’s article posted yesterday exemplifies what I’m trying to convey ,and goes above and beyond the paragraph above as to why Zoroark-GX is an incredibly skill intensive card. If you’re on the fence on using a Zoroark deck, even if it seems like it has a huge target on its back, I really recommend you check out his article.

It certainly took me a while to jump on the Zoroark-GX train, as can be seen by my deck choices at London and Memphis. I’m a firm believer in the card now, and it’ll be hard to pry me away from it in Dallas and Sydney shortly after. Now that I’ve gotten that off my chest, let’s move on to the final 3 options that I’ve narrowed down to for Dallas.

Much like its Standard incarnation, this deck hits hard, is hard to take down, and can adapt easily to whatever the metagame calls for.

This is my current list. I have it sleeved already, and I don’t think it will be changing much by Friday:

Instead of trying to compete in the 1HKO department with other Zoroark decks, it tries to level the playing field with Sudowoodo’s Road Block, and then out-resource them in an Acerola war, which other Zoroark-GX decks are hopeless to win.

Golisopod-GX’s Grass typing is very appealing at the moment, as it gives you a natural advantage over Seismitoad-EX and Wailord-EX decks which seem to be getting hype. Wailord won’t be popular simply because of Tropical Beach availability, however, Seismitoad-EX combined with Zoroark, Garbodor or even Seviper will certainly make an appearance.

High HP attackers, synergy in the Weakness coverage they offer for each other (Zoroark runs through Fire decks, Golisopod deals with Lycanroc), consistency, and resource management are all factors that make this deck a formidable contender. Its one big, gaping weakness though, is its shaky Night March matchup. Oricorio can only take you so far—though, it can be devastating if not played around. However, you should expect that, the higher the tournament table it is, the less effective Oricorio will be.

Since Night March won the last big tournament in Expanded, it’ll surely make quite an appearance. Hence, this deck is ranked lower than the next two.

I feel as though this is the least talked about version of Zoroark lately, with Night March, Seismitoad, Alolan Muk, and Golisopod taking all the top spots at League Cups. However, this combination did take 2nd place at San Jose, and for good reason. Using multiple Zoroark-GXs, allowing you to draw a lot of extra cards per turn is already great. Being able to use a Lysandre effect on top of that can be game changing.

A Rockruff on the bench draws significant attention to itself due to the threat of Dangerous Rogue-GX. I’ve slimmed down from the 2/2 line I ran at San Jose, to a 1/1 with a single F Energy. This plays more like a straightforward Zoroark deck, having the option to take 1HKOs with Hex Maniac (to shutdown Sudowoodo) and benching Exeggcutes, all while having the ability to do it over again the next turn.

I found the heavier Lycanroc line really clashed with the deck and what it was trying to achieve: setting up multiple Zoroarks and gaining a lot of card advantage. Zoroark BKT was dropped as well, despite it’s potential in the mirror, because you still have the Foul Play Zoroark for a non-GX attacker and its versatility overall.

Despite this having so many potentially-useful cards, I still find myself wanting a 61st/62nd/63rd spot. Cards like Mallow, Teammates, Pokémon Ranger (just to be extremely safe), seem like great inclusions the deck, but the only potential cards that I could see removing would be the Ghetsis and 3rd Choice Band.

So far, this is what I have sleeved, but I’m seriously contemplating adding Mallow or Teammates over Ghetsis. Mallow is more of insurance, to get the cards you need to complete a KO or push for a KO—the same is true of Teammates. Ghetsis allows for some late game plays to deny VS Seeker and is an extra layer of defense against Sableye/Garbodor.

Ultimately, the last spot will be what I’m ‘feeling’ for the day, as trying to predict what I’ll be going up against in an 1,000 players tournament will be impossible. I will say however, that I have faced Sableye Garbodor more than once at each Expanded Regional so far, so that alone might tip my choice. Chalk it up to superstition perhaps?

Mikey and Xander have done a wonderful job explaining the ins and outs of Night March and why it is so inherently powerful in today’s metagame, so I won’t go into detail here. Just leaving my current sleeved Night March list, which is almost exactly like Mikey’s. It doesn’t go so far as to include a 4/4 Zoroark, as without Sky Field, that seems like a waste to me, so I’m happy with the 3/3.

That also opens up a couple of precious spaces, which can be used to continue teching against the tougher matchups (like Parallel City and Ranger), or simply adding other types of consistency such as an extra Shaymin-EX, an extra Teammates, a second Float Stone.

Consistency, 1HKOs, defense against Seismitoad with Ranger…this deck truly has it all. If I were a betting man, I’d say this will be at least 25% of Day 2 share.

As I started testing really hardcore for Expanded, Trevenant was one of the decks that I was most interested in. Item locking is great no matter, and Espeon-EX with four Enhanced Hammer actually makes any Zoroark matchup very winnable. The biggest issue I encountered though, was how fragile the deck actually is early on. With no Pokémon draw support, in the form of Zoroark, Octillery or even Oranguru, it can suffer.

Aside from that, the deck really wants to play Jirachi-EX and Tapu Lele-GX to find extra resources and increase the chances of Turn 1 Trevenant with a Wally. Espeon-EX is a necessary inclusion for all the Zoroark decks, but it’s also not an ideal starter. Finally, Shaymin-EX is also in there to draw into resources, but becomes yet another non-ideal starter.

This is the list I have sleeved, but it’s not very likely that I’ll be using it at all. It’s basically pure consistency—as much of it as I could possibly fathom—while also having a lot of disruption in the form of 4 Enhanced Hammer, but also the spicy 2 Counter Catcher.

I genuinely feel there will eventually be a way to break Counter Catcher, and I thought Trevenant was it. It’s the best spreading deck, very few people would expect it, and there’s even fewer ways to actually play around it.

Ultimately, I am not convinced this would pull me through 9 rounds of Swiss without too much struggle. Some games you cruise very easily, and others it seems like something as simple as finding a Phantump can be an issue. It’s a very strong deck, don’t get me wrong—it’s simply not my cup of tea. (Despite how proud I was that, up until now, there had been 0 mentions of Counter Catcher.)

The scenarios where Counter Catcher is especially useful are when you get to combine it with Enhanced Hammer, creating a situation where your opponent can’t attach to retreat AND attach to attack in the same turn. The Item lock means there’s no way other than Acerola to accomplish that, and that’s even hard to find under Item lock.

If you’re contemplating Trevenant, I’d advise you to consider even one copy of Counter Catcher, as I’m sure you’ll see its impact almost immediately. It strongly boosts your ability to disrupt your opponent and get enough Silent Fears off to win a match.

I honestly don’t have more to add to the Expanded discussion. It’s been a huge gap between Memphis and Dallas, the longest one so far this season. Shortly after Dallas though, comes the second International in Sydney! My time has been split between Standard and Expanded, and for the most part, I’m heavily favoring the two Zoroark decks: Lycanroc and Golisopod. Despite being very different from their Expanded brothers, Zoroark is still the consistency king, and all the concepts that apply to Expanded apply to Standard as well.

I think Australia will be heavily influenced by what happens in Leipzig Regionals this weekend, and also a little bit by São Paulo as well. Will Zoroark be heavily countered with decks much like Azul’s Golisopod/Garbodor? Or will Zoroark take a huge % of Day 2 and/or Top 8?

I’m really eager to participate in Dallas, but I’ll also be very inclined to keep note of what happens over there, to finalize prep for Sydney.

Thank you so much once again for reading my article. I hope your testing for Dallas went well, and this last insight on Dallas is useful for you! Until next time! 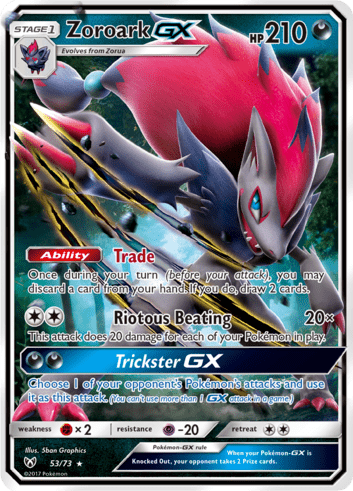