Hey everyone! This is a bit of a deviation from my normal writing schedule but for a handful of reasons (just got back from Brazil, not going to Utah Regionals), I’m pushing my UG article to later in the week and focusing on Standard. But, I didn’t want to leave any of you out who are looking for a good play for Expanded, so today I have a quick “primer” to catch you all up on the format!

This is the deck that I’d probably be playing in Utah, but also one that I’d want to put in a lot of time with to learn before the event. It’s not that I think the deck is that hard to play, but there are a good handful of decisions to make each game and the reward for playing perfectly is usually a win.

Why would I play Drampa? The deck just has the best matchups against the field while also being strong against Zoroark. Garbotoxin carries a few matchups, Trashalanche a few more, and your other attackers shore up the rest. However, even with the often extraneous addition of Sudowoodo GRI, the Zoroark matchup is loseable. Red Card is usually the culprit, but I think a fast start from Zoroark and/or a slow start from Drampa could lead to a loss.

Even so, this is exactly the kind of midrange deck that I’d want to take into a tournament right now. It has been incredibly successful at recent Expanded events and it has the best chance to win the tournament on any given day. I don’t think this will be the most popular deck, or even among the most popular decks, but it’ll see a lot of success relative to the amount of people who choose to play it. Just do yourself a favor and add a Tauros if you expect to play against Glaceon.

Even though this is the deck everyone is gunning to beat, it’s good enough that it’ll be incredibly successful. The raw power of Zoroark is enough to even beat hard counters a decent amount of the time. Cards like Hex Maniac, Red Card and Exeggutor give you tools to win every matchup, and the ability to swing for 210 from T2 onwards is impossible for many decks to keep up with.

One of the most interesting things about Zoroark in Expanded is that players continue to innovate and iterate on the list. Cards like Alolan Muk, Lycanroc-GX, and Exeggutor have all seen play, but Tord and Pedro Torres both Top 4’d in Stuttgart without any of those! It’s definitely a deck that can adapt to different metagames or deck building trends.

Zoroark has been public enemy #1 for the past 2 NA Regionals and the most recent Regional in Europe. It won 2-of those Regionals and took 2nd at the other. If you’re not confident that your other choice(s) for Utah can beat Zoroark, there’s no shame in joining the dark side. Take advantage of just how broken this deck is and score some easy wins.

P.S. If you’re looking for an edge in the mirror, I actually was considering Zoroark/Magnezone for Costa Mesa before I ended up with Glaceon.

Glaceon and Drampa/Garbodor both sort of fit the same niche in the metagame. They have strong matchups against Zoroark plus some sort of a lock to give them a chance against the rest of the metagame. Glaceon has the stronger Zoroark matchup of the two, but weaker matchups against many other decks in the format.

Glaceon has the best “run hot” potential of any non Zoroark deck right now, as going 1st with a T1 Glaceon in every game will probably carry you all the way to Top 8. The deck is surprisingly resilient as well, often giving you several turns to set up an impenetrable lock. However, the list is tight, and you’ll have to choose which matchups are most important to tech for. And with so many decks in Expanded, you’ll end up being weak to something in the metagame.

Someone will run hot with Glaceon and I wouldn’t be surprised to see it in Top 8. Even if the metagame isn’t great for it, someone will hit the right matchups (or just Zoroark 9+ times). Glaceon has a very high ceiling, but the floor is inversely low.

Even though Lucario didn’t perform well in it’s Expanded debut, I think it’s worth putting some time into for players looking to break the format. After all, if Zoroark isn’t good enough to be banned, there has to be something that can keep it in it’s place. Right? Right?!

Two players piloted Lucario variants to Top 32 in Stuttgart, one being a member of Limitless and one being a past European National Champion. However, the former lost to 2 Zoroark decks after a stellar start to the tournament, and I’m not sure how the latter fared against the deck. If that matchup is indeed bad, and Trashalanche can’t be played around, then maybe Lucario isn’t worth playing. But the potential in a Pokémon that 1HKOs Zoroark is too good to not try to exploit!

As far as the list, I agree with Phillip that Octillery is the optimal draw power, and that a heavy Korrina count is essential. You just want to be able to cycle Lucario turn after turn as easily as possible. I’d want to find space for a Professor’s Letter and would try out Scoop Up Cyclone vs Computer Search as the ACE SPEC. I’d probably even diversify the tool lineup with Choice Band and maybe even a cheeky Wide Lens.

Whatever you do, if you’re testing for Utah, put some time into Lucario to see if there’s a gem to be found!

Quite honestly, if you’re not playing one of those decks, you’re doing yourself a disservice. There are a handful of other semi competitive decks in the format, but without a strong read on any meta trends, I wouldn’t want to take anything other than what I’ve mentioned already to this tournament.

The problem is that there aren’t really many other decks in the format that stand a chance against Zoroark and also have the raw power/flexibility to beat the dozens of other card combinations in the format. The one that comes to mind first is Wailord, a deck I’ve never liked as easily exploitable and just generally annoying. It has a great Zoroark matchup, but many decks can tech cards like Bunnelby or Oranguru UPR, or even Lusamine and Team Rocket’s Handiwork. Plus, decks like Gardevoir and Night March just inherently beat it.

Other decks that fall under this same category (weak against Zoroark or the field, but otherwise strong) would be Night March, Gardevoir, Donphan, Durant, Seismitoad/Garbodor, Trevenant, and Greninja. All of these decks have the potential to Top 8 the tournament, but I’d be very surprised to see them win. But hey, I’ve been proven wrong before and will be proven wrong again in the future. Who knows what could happen?

I hope you all enjoyed this quick Expanded metagame summary. The format is so diverse, but Zoroark really constricts the viability of a lot of decks. Being able to hit for 210 a turn while chaining Hex Maniac for most of the game is just insane. Hopefully future Expanded tournaments show us more diversity; maybe the playerbase just needs time to find out how to best counter Zoroark.

I’ll be back later this week with a look at Standard as we head into Toronto and then a new set! Until then. 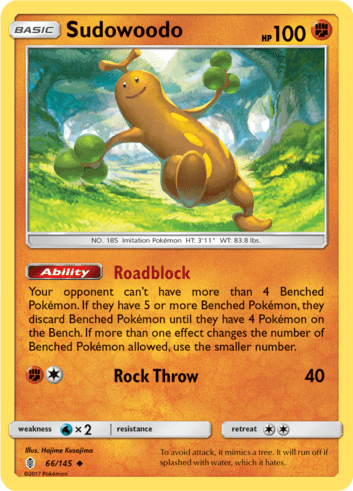