What’s up everyone! It has been a few months since my last article: the podcast has taken most of my content creation time and personal things (finishing up the school year at work and getting ready for a big move) have limited my ability to write consistently. However, I am excited to write not one, but two pieces for our mini-marathon leading up to the North American International Championship.

I recently reached the 400-point threshold to secure my Day 1 invitation. It took a bit more work than expected this year, so I am relieved to finally get there. I finished in the Top 128 at Virginia Regionals with Night March (one card off the list Michael Pramawat used) and got a Top 4 finish at a League Cup with Zoroark/Lycanroc, scooping to a buddy in Top 4 so he could get a Cup win and get closer to his invite. While I only attended a few Regionals this year, I did not make Day 2 at all, so it made my climb a bit more difficult than I anticipated. I am hoping I can make Day 2 at NAIC and/or Worlds this year to help redeem my season a bit. With school out I have lots of time to test and get ready for these tournaments and I am excited to prepare.

Despite the rock-paper-scissory-y feel of the format, I have actually come to enjoy it. I think all of the decks have a pretty high skill cap and lots of games are decided on little decisions. That said, there are still games where one person high rolls and there is little the opponent can do to counter play these actions (like double Beast Ring turns). I think this time in the season is always the best, as the card pool is the widest. This opens up the most possibilities and gives the best players the biggest advantages both in deck building and properly playing around certain combinations of cards.

As I said, I have two articles for you all during this stretch before NAIC. I am happy to be the one kicking it off. In my later article I will look at Zoroark/Lycanroc and perhaps some more under the radar Zoroark decks. Today, however, I want to look at my baby: Gardevoir-GX.

Gardevoir’s history is well documented, going back to the World Championships last year. Diego won that tournament in stunning fashion, with Pablo also making Top 8 (only losing to Diego, in fact!). Coming into this season, Gardevoir was well positioned to continue its domination. During the first few months of the 2017-2018 season that is exactly what it did. It put up strong performances in both formats: my buddies Sam Chen and Pablo made Top 4 and won the two Standard autumn Regionals in Hartford and Vancouver with the Sylveon version of the deck, while it even took some Top 8 spots in the Expanded Regionals at Fort Wayne and Daytona.

Heading into the first International Championship of the year, Crimson Invasion and Shining Legends had come out, but no one really knew what to expect from it. Gardevoir was still the most hyped deck. The hype went so far that a large contingent of American players ran a janky Metal deck just to try to counter it! The other revelation in the deck was Seena Ghaziaskar’s insistence on the “Broken” version of the deck, which dropped Sylveon in favor of four Max Potion. This made the deck much stronger in the mirror match, as you could effectively play around Plea-GX and simply run the opponent out of resources by playing eight Max Potion in a game.

Indeed, this opened up a whole different win condition for the deck: you could play as an Yveltal-EX deck, hitting them hard for 30× the amount of Energy, or you could play as a Wailord-EX deck, utilizing Max Potion and Twilight-GX to run the opponent out of resources and potentially decking them! I wrote an article outlining this new variant of Gardevoir in the week leading up to the event and our own Christopher Schemanske piloted this version to a Top 4 finish.

Following this tournament, things got…dicey for Gardevoir. The format shifted significantly, with the emergence of Zoroark and Buzzwole decks. Whereas Volcanion was the fastest deck prior to Crimson Invasion/Shining Legends, Zoroark and Buzzwole became the de-facto aggro decks and they matched up much better to Gardevoir: they required less Energy to attack, had more HP, and were more consistent. Though I still maintain that Gardevoir was underplayed during the next six months, it is undeniable that its time at the top had passed.

With the release of Forbidden Light I had just assumed Gardevoir was even more dead than before: Buzzwole—already an unfavorable matchup for Gardevoir—got even stronger. However, a couple of interesting things have happened that makes me believe Gardevoir is at least somewhat viable again:

With some of my justification for reviving this deck, let’s take a look at a skeleton:

To fill out the list we have a lot of options, some of which I have discussed above. Before we get into the true options, there are a few spots that must be dedicated to something specific.

If I were playing in NAIC tomorrow and played Gardevoir, this is the list I would use:

At the end of the day, Gardevoir is a Stage 2 deck. You will get hands that are unplayable: clogged with Rare Candy and no targets, too many Energy, or a bunch of tech cards. Sometimes your Ralts will get picked off too quickly to play a real game. As someone who has played Gardevoir a lot this year, I understand. You bring Gardevoir to a tournament knowing this possibility and looking for lines of play to help in these scenarios. One common play is to load up a Tapu Lele-GX and start swinging with that if your opponent is going after your Ralts or you can’t find your evolutions. Sometimes the pressure from a fat Lele is enough that your opponent ends up having to deal with it and gives you the turn you need to finally set up a Gardevoir.

Despite its consistency issues, Gardevoir wins a high percentage of games where it sets up. With Mysterious Treasure you set up even more than you used to, despite the speed of the format. In a format that is defined by its matchups I am tempted to play Gardevoir, a deck that breaks the trifecta of decks and is a strong deck in its own right.

I should note that I would not play this deck unless you are willing to play a lot of games with it. I find it to be a difficult deck to play optimally. There have been a lot of games I lose because of something small that comes back to bite me: I bench a Pokémon I shouldn’t have, I promote a Lele to take a hit when I should let a Ralts die instead, I Ultra Ball the wrong card, use Max Potion at a wrong time, etc. Benching extraneous Pokémon is probably the biggest way to turn a win into a loss. This format is largely a prize race and one of the biggest advantages Gardevoir has is its high HP Stage 2’s. Benching an extra Ralts or Oranguru late in the game can give your opponent an easy prize to make it easier for them to close out the game. You need to constantly think about how your opponent will draw their 6 Prizes, and if possible, force them to draw seven.

I’ll end with an example of the above: I had a game against Buzzwole where my opponent had 5 Prizes left to my six, but my board was awesome: two Gardevoir-GX and a Gallade. I thought I had the game locked up. I slowly began hitting into his things while he hit into mine. At 3 Prizes each, my board was just one Gardevoir and one Gallade. He Beast Ringed onto a Buzzwole-GX and used Knuckle Impact for 200 on my Gardevoir. I couldn’t find a Max Potion, but anticipating an N after I KO’d his Buzzwole to bring me to 1 Prize, I benched Oranguru.

He was left with no Energy on board. On the following turn, he played a new Buzzwole-GX with a Strong Energy, used Guzma to bring up Oranguru, and used Jet Punch to win the game. I felt so silly! Even if I got N’ed to 1, if I had not benched Oranguru, there was no way he could have won that turn and probably not even the following turn. This would have given me time to utilize Premonition to get a Supporter and perhaps win the game with Sensitive Blade.

Thank you for reading my third? fourth? dissertation on Gardevoir. I really am enamored with the deck. My girlfriend actually knows what a Gardevoir is—perhaps the only Pokémon name she knows outside of some of the most famous original Pokémon. Though I am still unsure if I will play this at NAIC, it is high up on my list. If you are bored with the triangle the top decks I would recommend giving it a try for yourself! 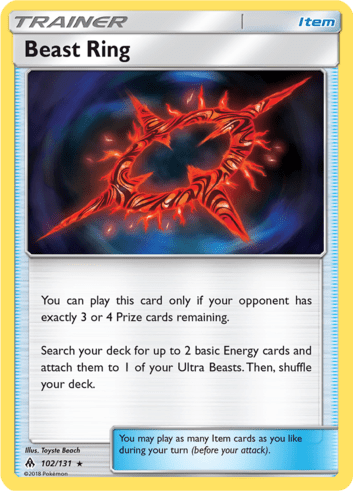