Hey all—happy to be back with another installment in our mini-marathon. While my look at Gardevoir was perhaps a bit grandiose—and I certainly intended for it to be that way—today my discussion will be a bit more modest. I have only played two decks in the Standard format in tournaments this year (except my first League Cup of the season with Golisopod/Garbodor): Gardevoir and Zoroark. With my dissertation on Gardevoir out of the way, the other deck I would like to discuss today is Zoroark: specifically, Zoroark/Lycanroc.

During the third quarter of League Cups I played Zoroark/Golisopod to a second place and a top four performance, both large northeast events. These were my first times piloting Zoroark in a tournament and I immediately regretted not playing it earlier. Trade is truly incredible and the consistency of the deck was something to be admired. I preferred Golisopod to Lycanroc back then as I liked the idea of having all seven of my Energy cards being outs to a one-attachment attack. In my mind this makes the Golisopod variant a bit more consistent than other versions. Pablo gave us a great rundown of the current Zoroark/Golisopod he has been having success with recently on Saturday.

Fast forward to last month and the release of Forbidden Light: While Golisopod was still tempting, Lycanroc’s ability to carry the mirror match, push the Malamar matchup heavily in your favor, and provide a reliable way to run through Baby Buzzwoles all made Lycanroc appealing. I tested the deck online a bunch with Eric Gansman and we both took it to some cups—he won one and I made top four, scooping to a friend as I had gotten my invite with a top four. Eric also took the deck to Sheffield Regionals where he made a few misplays to miss out on day two, but our list did make day two via another friend. We saw a slightly different list win that same tournament.

Zoroark/Lycanroc (ZoroRoc) saw some play during League Cups in between EUIC and Memphis Regionals, but it had its breakout performance at the latter, where Michael Pramawat won his seventh Regional Championship. At that point, it was the only other Zoroark deck outside of Tord’s Zoroark/Golisopod (ZoroPod). Since then, it has been a mainstay in the format. With Buzzwole’s popularity also only increasing since that tournament, and ZoroRoc’s inherent weakness to it, ZoroRoc has not seen the success that such a powerful deck probably should have seen. In any case, it has seen some resurgence recently and is in at least a solid position moving into Columbus. Let’s take a look at our skeleton list:

The first thing to note is that even though there are a lot of spots open in this list, many of the remaining 17 cards need to be dedicated toward specific “types” of things—most notably more Energy cards and more Supporters. The Pokémon line is pretty filled out already, but such is the nature of this deck. There is a world where we play a smaller Zoroark line with no Puzzle of Time, similar to the other Zoroark lists Brit and Travis have shared recently, but I have not put any time into such lists, so my skeleton remains more traditional.

If we remove the Lycanroc line here, we see the 38 cards that are familiar to every Zoroark deck. In fact, we will likely add a few more cards back in (third Brigette, third N, etc.) that make the Zoroark “core” even bigger. I find it amusing that different Zoroark decks run so many of the same cards. This makes it so that most Zoroark decks have pretty similar matchups, only shifting slightly based on its partner. Whichever Zoroark deck you choose to play depends a bit on the metagame and a bit on how comfortable you are with a certain variant. Since so many of these cards are familiar, they require little explanation. Instead, let’s jump right into looking at how we could fill out the rest of this deck:

One great thing about Zoroark decks is their flexibility. As I continue to consider ZoroRoc, inevitably some of the cards in the list will change. That said, if I were to play ZoroRoc right now, here are the lists I would be writing down:

This is the matchup you do not want to see. No matter how much you tech your deck to beat Buzzwole, it is still extremely difficult. Here are some ways to approach the matchup:

This is the matchup you do want to see – especially the Psychic version. We are a pretty lopsided favorite regardless of their list – focused on GXs or non-GXs. The strategy is the same for all variants: kill Malamars. Leverage Parallel City to limit their bench, potentially taking out an Inkay that way as well. We have so many gust effects that it is easy to KO a Malamar nearly every turn from turn two on. Without Malamars they have no reload and their attackers are inefficient. The Ultra Necrozma matchup is a bit scarier if they run Beast Rings to get to 1HKO, but it is still favored.

Dangerous Rogue will usually finish the game for 2 Prizes, but can be used to take out a mid-game threat as well. You do have to balance KOing Malamars and reducing the size of their bench and ensuring there are enough Benched Pokémon you can still take a 1HKO on something with Dangerous Rogue. Reverse Valley helps against Baby Hoopa, which can actually be quite annoying otherwise.

yugioh.wikia.comZoroark mirrors have not changed much since last December. Attacking with Lycanroc as much as possible is correct in almost all of these matchups, but it can be a bit more nuanced than that.

Zoroark/Lycanroc is one of the strongest decks in the format. If BuzzRoc was not as powerful as it is, I am confident this would hold the title of best deck in the format. The power of Trade combined with perhaps the strongest Pokémon in the format in Lycanroc gives this deck such versatility and strength. Even if you do not decide to play ZoroRoc, I hope this article gives you insight in how to play against it, as you will undoubtedly see this deck in numbers in Columbus.

With that, my two articles for NAIC are done. I apologize for not getting a podcast episode out for this tournament – I had a lot going on in the weeks preceding the event (finishing school year, moving, weddings, being sick) and other people are busy as well, so it was hard to coordinate schedules. I will hopefully have a couple episodes in between NAIC and Worlds. Thanks for reading and come say hi at NAIC! 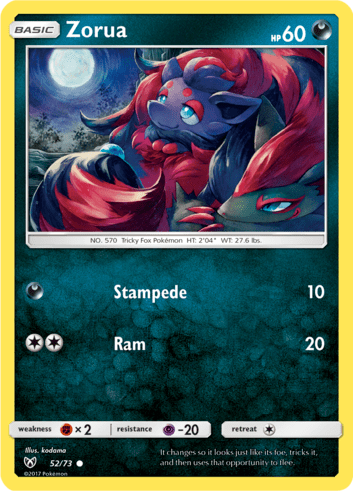