Hey all! I’m fresh off participating in Philadelphia Regionals and ready to share some lessons with you! The tournament did not go super well for me, but I had a good time none the less. I did not get a ton of time to test in between Worlds and this tournament, as the new school year has started. The huge shift in the format is really cool and I was excited to see what the direction the game was heading in without cards like Professor Sycamore and Parallel City.

In the time I did get to play, I mostly tested Zoroark decks. They felt like the most well-rounded heading into a still relatively young metagame. I was mostly set on a Zoroark/Weavile list that, though it kept fluctuating, would have looked like this at registration time:

The Magcargo line was a 1-1 Garbodor line for a while, but I was convinced by some people to swap it for Magcargo. I still think a thin line of Garbodor is pretty good in Zoroark, as evidenced by Xander’s run to the semi-finals. I had this deck submitted as of 7:30am Saturday morning, but was convinced to switch, as I’ll discuss below. Before that, I’d like to highlight a few other things in the list:

So while I didn’t end up playing this, I still think the deck is pretty solid. It has a pretty close matchup against ZoroRoc, but against a top player it is probably unfavored. It does boast the strongest Rayquaza matchup of any Zoroark deck in my opinion, while also having one of the strongest Buzz/Shrine matchups; though that may change if Field Blowers become staple in these decks. Finally, Malamar is generally a good matchup as you can punish them for setting up a bunch of Malamar, and if they have to play Tapu Lele-GX down at some point. Marshadow also fuels your Evil Admonition. I think this list would have a very good matchup against Rukan’s second place list.

Now, what did I play? Well, after helping my friend Peter Kica with some math on PokéNav during the week, he sent me a deck he had been hyping up at 11pm the night before the tournament. I was pretty set on Zoroark, but was not super stoked to play it. I slept on the idea of switching and woke up with a feeling of “why not?” Here is the list I submitted for Philadelphia Regionals:

The list sent to me had a 4th Shrine over the 4th Band, but I said I was going to make that switch and then most people did. Choice Band allows us to 1HKO Zoroark through Weakness Policy, which I thought would be a big deal in the matchup.

Here were my matches:

Round one had me playing one or two draw supporters in both games combined – a great way to start when I had played exactly zero games with the deck. The next three rounds went pretty smoothly, as I learned how to play, drew decently well, and got pretty good matchups.

Round five ended a bit unfortunate: in both games I prized two Passimian, and yet I won a close game one and was on track to win a close game two. At the end of game two I KO a Sylveon to go down to 2 Prizes and if I hit my second Passimian I immediately win the game. Unfortunately it is in my last 2 Prizes. Even so, I still win the game if my opponent does not hit his last DCE off a Cynthia with about 20 cards left in deck. Alas, he does, and we do not even have time to set up for game three.

Round six saw another good matchup. Round seven against Andrew Mahone was a nail biter. He won a pretty decisive game one where I conceded fairly early. I got a much better start in game three and was able to take some prizes before he got set up. At 3-6, Andrew scooped, though it was uncertain if I would have won. After the match Andrew said he felt comfortable with the matchup and did not want to end up losing a close game just for us to end up tying the series. Game three ended up coming down to the wire, where I was able to respond to multiple Lugia via Mimikyu+Counter Energy and then transitioned to using Flying Flip enough times to accumulate a significant amount of damage on the board. With 2 Prizes left he Guzma’d out my Fairy Tapu Lele and took a KO on it, as I would have been able to move enough damage around to KO both Lugia that had the rest of his Energy. On my last turn, I had to hit my 4th Rescue Stretcher and a Counter Energy to get the Magical Swap off, but missed it off my Cynthia. Though I wouldn’t have won immediately, I think this would have won me the game in a few turns.

Round seven ended up playing out quite similarly to my series with Andrew, with both of the first two games coming down to the wire. We didn’t have time to set up for game three. Although this knocked us out of Day 2 contention, we knew we could still get points. Unfortunately for me, some more poor draws in already iffy matchup knocked me right out of Championship Point contention.

Though the deck was fun, I think its lack of an ability-based draw Pokémon significantly hurts it. Though I mentioned Magcargo before the event, Peter told me we didn’t have the bench space. After playing the deck for nine rounds, I agree with that, but still missed the effect of Smooth Over. Oranguru would not be as useful in this, as it is quite difficult to thin your hand – you need to hold so many cards over the course of a game. On a similar note – and a positive for the deck – is the lack of Parallel City in the format. Passimian really needs at least four bench spots to work properly and my bench was frequently full throughout the tournament.

I do not think this particular deck has much of a place in the meta going forward. If you are curious on specific cards played in the deck – there are lots of interesting ones – please feel free to reach out and I can tell you how they are useful. Ultimately, though, while cards like PokéNav and Underground Expedition are cute and actually good in a deck like this, they are overall weaker cards than what is in my most decks and should probably not find their way into many other decks.

Many players that used this deck commented on how often we felt like a Tapu Koko deck with Passimian splashed in. Utilizing Tapu Koko to spread a lot of damage, activating Counter Energy, and then pressuring down things with Passimians later on was the main line the deck took. After the event, Russell and I were talking about how we just wanted to play a more dedicated Tapu Koko deck. I’m a bit wary of losing the pressure of Passimian, but I think the idea has a lot of merit. The main matchup where Passimian attacking is strong is Zoroark, so I’ve included four Enhanced Hammer to pressure their Energy. Without Special Charge or Puzzle in the format, if they do not play Oranguru, those four DCE are all they have. Let’s take a look at a draft list:

Something like this feels like it could have a place in the format. The list is definitely a first draft, but the idea is sound. Flying Flip puts a lot of pressure on a lot of decks and can force them to play things they might not want to. I took some ideas from Caleb’s winning list and combined them with things from the Passimian list. Deoxys and Mimikyu both felt like solid attackers in random situations, but they certainly are cuttable. Switching cards could be good, but I am less worried about it than in Buzzwole-centric Shrine decks.

Some final thoughts on the current format:

I am not sure how much I will play this year. Philly Regionals was the closest one to me and the next closest is Virginia during Thanksgiving weekend, which I will probably miss due to wanting to spend time with family. Dallas, North Carolina, and Collinsville have potential, but I’m not sure how I’ll feel as they get closer. Connecticut is the only other Regional I’ll definitely attend.

One of my best friend’s wedding is on one of the potential Saturdays that Worlds could land on. The mystery of the Worlds date, coupled with the unknown CP-requirement, has left me feeling unmotivated to start the push for a Worlds invite. In any case, I will be at Worlds for at least the days leading up to the event, as Washington DC is just a short 45 minute drive away.

Perhaps it is my age, or my “old-school”-ness, or just my own personal preferences, but I actually like playing League Cups much more than Regionals. Living in the Northeast means I never have to travel that far to attend a tournament and I can be back to have a late dinner with my girlfriend or go out at night with friends. The tournaments themselves remind me of what it was like to play in the 2004 – 2008 era – similar size and competition to City and State Championships. I much prefer best of one and would probably enjoy Regionals more if there were 12-14 rounds on Day 1 that were best of one. Because of this, I’ll still attend League Cups when it is convenient for me.

I’ll continue to host the podcast, but more than ever I’ll be looking for guests to cue me in on the happenings of the meta. I look forward to seeing how the game develops this year in a new format, even if it is more from the sidelines than I have gotten accustomed to. Till next time. 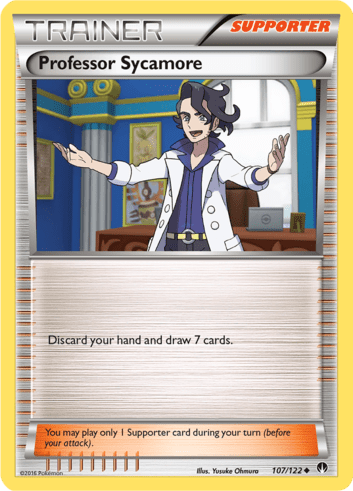