Hello everyone! Another Regional is in the books, and this one is a bit unique in the sheer number of players calling for the death of the format in which it occurred. That may be a bit of an overstatement colored in recency bias, but the calls for Lusamine’s banning, or some other remedy for the environment that has allowed mill decks to attain a foothold in the game, are gradually building in volume. Of course, we didn’t actually see any of these mill decks make Top 8 in Roanoke this weekend—perhaps telling itself—but the specter of these decks has nonetheless shaped the Lost Thunder format in a profound way moving forward.

Generally speaking, these sort of “annoying” decks tend to be particularly prominent in terms of local event concentration, so if I were you, I’d expect to see a healthy supply of them at your upcoming Cups and Challenges. For whatever reason, players do seem to back it off sometimes when it comes to mill decks at the major tournaments, but there’s never any such inhibition at the local level—it could be an interesting couple of weeks.

In addition to those local events, we have a Regional in Australia this weekend, a Special Event in Chile next weekend, and Harrogate/Anaheim Regionals immediately following to round out the 2018 Tier 2 circuit. Without a doubt, there’s a lot of CP up for grabs over the next few weeks at all levels. In my mind, a key to earning it will be dealing with these mill menaces, so I’m going to take today’s article to cover that specter from a few different angles.

While I was in attendance in Roanoke this weekend, I don’t have any sort of report or anything of that nature to offer—after being asked on Friday afternoon, I was added to the event’s judging staff (or, added back—long story). I spent the weekend floating between the stream and the floor, meaning the prep I’d done for the tournament wasn’t put to the test. Nevertheless, before I got that email on Friday, I was planning to play either Blacephalon-GX or Regigigas/Hoopa for the weekend, so I have some decent content to cover provided how the weekend went.

When Alex and I got to Roanoke, and in our discussions prior, Regigigas—by my understanding, inspired by Michael Catron—was the deck we had our eyes on for the weekend. It seemed on paper as though much of the format would be unable to deal with a sea of 180 HP 1-Prizers, and that was attractive to be sure. We went as far as actually acquiring the Regigigas at the venue before testing the matchup that concerned me the most: Malamar. Stable, gimmick-free Energy Acceleration has always been the antithesis of mill, and this proved no exception in our testing on Friday. It was possible to sneak games out, sure, but it wasn’t comfortable.

That led to an important question: how important was it to beat Malamar? In my eyes, it was a pretty essential consideration. Given the early season success of Malamar/Shrine in the United States, and the United States’ historical tendency to pay more attention to what happens here than what happens elsewhere, I wasn’t convinced the Latin America results would be enough to convince people to leave their P Energy at home—or, at least, to do so in enough mass to remove the problem. On the other hand, a dirty secret of mill decks is that players who don’t know what they’re doing in the matchup can find a way to a loss regardless of what they’re playing, and there’s a realistic correlation between playing out-of-date decks and having difficulty in unforeseen matchups.

Now, that’s not remotely to say Malamar was an out-of-date deck, per se: Jason Annichiarico, Beckett Pierce, and others demonstrated that with their innovative takes on the list. But, my concern was with the remnants of early-season style Malamar/Shrine—and that, I don’t think there’s much argument, was outdated. In hindsight, I think I was right to be concerned about that matchup, as Malamar seemed big enough in the room to have been a potential problem. We’ll probably know more via the RK9 meta breakdown soon.

To get back on the subject of mill, the fact that Malamar was not meshing well with our reality shifted the focus toward Blacephalon, championed to my brother by Wes Hollenberg. A few techs were tossed around in the name of beating mill, though in the end they ended up going without. I’m not honestly sure how many mill either of the pair (or Ian Robb, who I understand was involved as well) hit in the end, but Blacephalon does have the advantage of being a deck with two implicit advantages against the genre: limitless damage and built-in energy acceleration. In the end, Alex landed 9th with the Blacephalon list they came up with.

Had I played, I probably would’ve played Blacephalon as well, but Regigigas would’ve been a close consideration too, with this list being most probable:

Moving forward, increased Faba counts could be an interesting spin, as despite my prior attacks on the card’s existence, it’s found a solid niche in the mill mirror business. Else, there’s only so much you can innovate here. A consideration of mine, though, is the Mt. Coronet/Metal strategy that certain archetypes have successfully employed in defense against mill. Plumeria is often a key to keeping your game plan afloat, but at the same time, is often counterproductive to your need for resources or buildup to an Unown Hand victory. A configuration with M Energy could be useful in this vein, but it’s a pretty radical consideration, so I’m not yet sure what all I think would need to fall in place to make it viable.

With that all said, I’m going to move into talking mill more generally: what makes it viable, and what this format can do to stop it.

Mill’s MO: Why it Works

Here’s the highlights on mill in my mind, and why it’s something that’s cropped up in today’s era:

Techs for Mastering the Menace

I want to talk some general tips for dealing with these attrition-based matchups, then get into some cards that the current format offers a few specific decks for turning the tables on the mill menace. I guess it’s probably worth clarifying, most of the way into this article, that my definition of mill today steps away from the Zoroark/Control and is more focused on the concept traditionally-known more as a “stall” sort of thing. I can hear a trading card game purist out there somewhere very upset with my lack of specificity on this distinction, but the passive mill is where we’re at in Pokémon right now, so it’s the terminology I’m running with.

So, does your deck have access to Beast Ring? Really want some Energy back from the discard pile? Electrode might be your man. Considering stall is entirely unconcerned with Prize cards, giving away 2 at the cost of getting 5 Energy cards back is a very solid trade, and helpfully, Ditto p’s release in Lost Thunder has made it easier than ever to play strange Stage 1s in ways never before considered.

While Electrode does facilitate some energy recovery, that’s actually not the primary use I’ve imagined for its abilities at this current stage in time. Instead, there are two primary other uses:

This is probably a Blacephalon-only special, probably, though any deck with Ditto could be compatible if you’re feeling particularly daring. Stinger-GX was noted as a cute trick early in its existence, but now it can have second life as anti-mill propaganda. There are a few notable issues, such as getting 3 Energy onto Naganadel or Ditto while under Plumeria siege, but it very thoroughly simplifies the process of winning the game: 3 Prizes is less than 6, and once more, you’re entirely unconcerned with your opponent’s activities when it relates to Prize cards.

The significant extra benefit here is Beast Ring, which is what makes this option attractive to Blacephalon and Buzzwole players alike—even certain Malamar lists could probably get in on the fun here, though it’s probably not entirely necessary. 3 Prizes is wonderfully compatible in that scenario, though admittedly it’s not quite as wonderful as Electrode’s 4 in Buzzwole’s case.

As an added bonus, in decks that already feature Ultra Beasts, Naganandel can be a legitimate way to deal with Buzzwole storms in a manner that’s energy efficient and easily recoverable with Acerola later, given Buzzwole probably won’t return a 1HKO. Psychic has never been a bad typing, and I don’t expect that’s going to change through the rest of the Lost Thunder meta.

This is a very general-purpose option, enabling any number of decks to beat mill/stall at its own game. Without a sea of Acerola, even the 70 damage Girafarig can offer eventually adds up. In the Round 9 Roanoke match I mentioned earlier, this was the strategy Frank Percic pursued against Regigigas/Hoopa in Game 1. It didn’t work out for him in the end, but a pair of Lusamine and a Mars would’ve done wonders in this sense. Even in other decks, disrupting the Lusamine chain in any manner can often be enough to throw mill off balance, and that’s often all you need to pull a win out.

In my current view, Girafarig is the potential answer to a lot of interesting dilemmas currently facing the Standard format, and I’d be unsurprised to see it start to slowly take hold as a mainstay within the area as we continue to move forward in the format. Most local format evolution is going to be slowed as we move through a period of weeks without any super-large Standard tournaments, but I’m curious to see if this holds true moving forward into December.

A few final thoughts on Standard:

That’s all from me today. Hopefully this helps you evaluate your options moving forward, and as always, feel free to reach out with any discussion on 6P as a whole.

Wishing you the best, 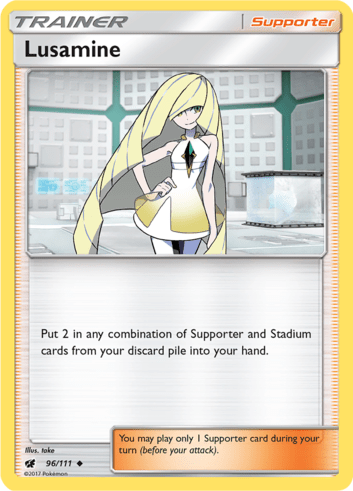