Hello 6P! I’m really happy to be back with another article for you! Collinsville Regionals just took place and what a tournament it was: the biggest Regionals of the season yet, with over 100 Masters playing on Day 2! Speaking of Day 2: This season’s 19 points to qualify for Day 2 rule has pros and cons associated with it that I’m hoping will be addressed for next season.

Making Day 2 at a Regional tournament is very exciting. (This is a pro!) I vividly remember the first time I made Day 2 at an event, and it felt amazing. The more people who will assuredly make Day 2, the better. However, the lack of prizing to differentiate those who made Day 2 vs. those who didn’t in the Top 64–128 range is something that has to change. (This is a con.) Playing extra rounds over the course of another day, only to get the same prize as people who “had the day off”—and can potentially can play in the Sunday League Cup that is now commonplace—is rough.

Even if it’s just symbolic in the form of packs, I do genuinely feel something needs to be done to make sure people are getting rewarded for those extra hours spent playing Pokémon.

I managed to make it all the way to the Semi-Finals in Collinsville, which made me very happy. (The last time I made Top 8 at a big North American Regionals was Memphis in Dec 2017, so over a year had passed since I saw my name in bold letters in the standings after Swiss was done.) I made Top 8 as 8th seed this time, which made the achievement all the more exciting as I was “the underdog” going into top cut. I was taken down by Daniel Altavilla, ranked number 1 in the World, and I also lost to the eventual Champion Zach Lesage earlier in the day. I had some great matches against some very tough opposition, but ultimately fell to a difficult matchup which could’ve gone either way.

As for the tournament itself, we saw a very similar metagame to the one in Melbourne which focused around Lightning, Zoroark with Fighting partners, and Ultra Necrozma/Malamar. Of course, a centralized metagame encourages people to develop counter decks, and so today’s article will look at the concepts that people used to counter the metagame, along with other notable decks that made Day 2 and caught my eye.

First off, the biggest “unsurprising” counter for the tournament was Vileplume BUS. Disgusting Pollen prevents most of the top attackers of the metagame from attacking: Zapdos TEU, Pikachu & Zekrom-GX, Ultra Necrozma-GX, Blacephalon-GX, and Giratina LOT. That’s three big decks shut off almost completely by setting up a single Stage 2. What to partner Vileplume with is the biggest question though, as it alone cannot handle all of the metagame.

Before Collinsville, a tournament took place in Japan which showcased Shintaro Ito’s Vileplume/Virizion-GX/Eevee & Snorlax-GX combination which, although not legal to play yet in our format, was super interesting nonetheless. When I saw his list and videos of his deck, I was immediately hooked and tried to work on a similar deck to counter the meta. Unfortunately, of all the ways I came up with to win, none could overcome Jolteon-GX, and with the card being completely sold out at vendors, I figured it’d see play and thus I scrapped the Vileplume idea completely. However, my friend Ross Cawthon did in fact end up playing our idea of Vileplume with Alolan Ninetales-GX LOT, Alolan Ninetales TEU, and Virizion-GX.

The idea behind the deck is to completely counter the top four threats. Vileplume walls Lightning and Psychic, while Alolan Ninetales beats any Zoroark-GX deck that doesn’t have Weavile UPR. Here’s the list that Ross ended up playing at the event, which I was too scared to play:

As you can see, this is very different from Riley Hulbert’s Top 4 deck which was essentially a Mill deck with Magikarp & Wailord-GX and Vileplume, along with a lot of disruption cards to exhaust your opponent’s resources. This deck, however, tried to overwhelm opponents by using mediocre attacks with Pokémon that have amazing Abilities.

The 4-0-3 Vileplume line ensures we have great odds of setting up a couple of Oddish on Turn 1, along with a Vileplume on Turn 2 to start walling. We don’t have to attack immediately, but setting up multiple Vileplume quickly was key to the deck’s success.

4-3/2 Alolan Ninetales, 2 Tapu Lele-GX
Thanks to using 4 Alolan Vulpix with Beacon, Alolan Ninetales-GX to fetch Rare Candy (and Last Chance Potion in the late game), and Pokémon Communication + Tapu Lele-GX, the deck is actually incredibly consistent and sets up very well. The trickiest part, and what was Ross’ eventual downfall, was the difficulty in powering up Pokémon consistently.

1 Virizion-GX
Virizion-GX ended up being one of the most key players of the deck, as depending on how much effort it took to set up a lock, Breeze Away-GX was actually the best way to remove potential targets. Virizion-GX will help create perfect board states where the opponent will have to go through Vileplume/Alolan Ninetales rather than be able to utilize Guzma to take Prizes on Alolan Ninetales-GX or Tapu Lele-GX.

Supporters
Supporter-wise, we have a super consistent Professor Elm’s engine in order to set up multiple Oddish or Alolan Vulpix’s on Turn 1. We also have infinite healing thanks to the combination of Lusamine + Gardenia, along with infinite resources thanks to Lusamine + Brock’s Grit. Gladion makes it so we can play one less copy of cards such as Energy or even Virizion-GX. However, since we do attack and take Prizes, unlike the other Vileplume stall decks, prizing important things isn’t the biggest issue.

Any amount of small hits from Zoroark’s flimsy Basic Pokémon will eventually add up to a Last Chance Potion heal. Even if Professor Kukui, Diancie p, or Devoured Field allows them to get KOs, 3 Alolan Ninetales and Brock’s Grit should mean that you will outlast their attackers.

3 Counter, 3 Fairy, 3 Grass
Since everyone will rush to take Prizes against this deck, Counter Energy is excellent here. (Counter Gain and Counter Catcher are also cards to consider.) The Energy lineup was a heated topic of discussion between me and Ross, and ultimately we settled on an even 3/3/3, but after the tournament, he felt like an extra Viridian Forest or G Energy was necessary.

Watch Out for Jolteon

This deck could be a good pick for Cups and Challenges—if you don’t expect Lightning decks to be playing Jolteon. If they do, the only realistic hope is that they’re a pure GX Lightning deck and you can wall them with Alolan Ninetales, but any copies of Zapdos mean trouble for you, as Zapdos + Tapu Koko p deal with Ninetales, and Jolteon-GX easily handles Vileplume. Nonetheless, I might be giving this deck a try at local events if the metagame is right for it, as even though there was a big Jolteon-GX presence in Collinsville, several Vileplume decks made Day 2.

I’m not the biggest fan of Mill decks, so the other versions of Vileplume are not my cup of tea, but I’m sure other people will give a Riley’s Vileplume deck a try and it might pop up in Cups all over.

Another Day 2 deck that caught my eye for its originality was Alex Cole’s Zoroark/Garbodor deck. This combination is not new, but it certainly hasn’t seen anywhere near the amount of play it did since last season.

Alex’s list included quite a few neat and original options that propelled him all the way to Top 32 in a very tough field, and it’s certainly a deck that I feel is worth exploring. Here is Alex’s list for reference:

There is a lot of merit to using Garbodor to punish Item use against the newer Turbo Lightning decks, especially those including Rayquaza-GX. Malamar variants also burn through Ultra Balls, Acro Bikes, and Mysterious Treasures quite quickly. Even if an opponent feels content that they left their Pokémon out of Trashalanche range, we have Alolan Muk TEU to discard extra Item cards and manage to get the 1HKO that way.

1 Buzzwole FLI, 1 Nihilego LOT
The inclusion of the Prize-specific Ultra Beasts, Buzzwole FLI and Nihilego LOT, gives the deck another dimension of attackers which is great, as your opponent has to keep track of their Items and play around specific Prize counts.

1 Kartana-GX, 1 Lucario-GX
We have Kartana-GX to close out games, and there is an awkward Lucario-GX which is not usable, as Aura Strike clearly states Lucario must evolve from Riolu in order to get the bonus damage. Lucario should be replaced for either a second Alolan Grimer or perhaps a Weavile UPR for a surprise Evil Admonition off of Ditto p.

4 Lillie
We have the normal Lillie engine that we’re seeing nowadays. Because there are no 60-HP Trubbish or Alolan Grimer, an Elm’s engine isn’t viable.

1 Professor Kukui
I would love to have a second Professor Kukui to more consistently add the damage to reach 180 (w/ Choice Band + Devoured Field) with Riotous Beating or to force opponent to be two Items below a potential Trashalanche KO.

1 Acerola
A second Acerola would also be a welcome addition against Zapdos. However, Garbodor’s 120 HP forces them to have double Electropower to 1HKO and thus is a very efficient attacker in the matchup, especially with double Field Blower in the list to remove their Tool cards and increase your damage output.

4 Double Colorless, 4 Rainbow
DCEs are great for Zoroark and Tapu Lele, while Rainbow allows you to use the rest of the wide array of attacks at your disposal. A surprise Trickster-GX, when paired with Choice Band and Devoured Field or Professor Kukui, can be devastating against a Pikachu & Zekrom-GX deck.

Thoughts on Both Formats

It’s unfortunate that the next two Regionals will be Expanded, as now we have to wait until Denver to see how the metagame will change after this past weekend. I can honestly say I feel like the Standard format got so much better since Team Up was released, purely because we have new archetypes, the older decks remained all quite relevant, and we have brand new awesome strategies that have a ton of potential like Blastoise TEU, Charizard TEU, and even an Umbreon LOT/Guzzlord-GX deck did well in Collinsville!

I’m not the biggest fan of Expanded, and I actually think it’s about to become extremely centered around three decks:

Will Zoroark be finally dethroned thanks to the newest bans, TAG TEAMs’ HP, and Pikachu dealing more damage than ever before?

That is exactly what I’ll be looking into heading into Toronto, our next challenge. I’m feeling very excited about all the upcoming Regionals and Special Events that I’ll be attending, especially having started off this Quarter the right way with a Top 4 finish at the biggest Regional of the season yet. If that’s any indication, things are looking great for my push for the automatic Day 2 invite to Worlds by placing in the Top 8 of Latin America.

That will be all for today’s article. As always, I hope you enjoyed the read, and I’ll be back next week with my final thoughts and testing results for Toronto! Feel free to reach me here or through my Tablemon social media with any questions! 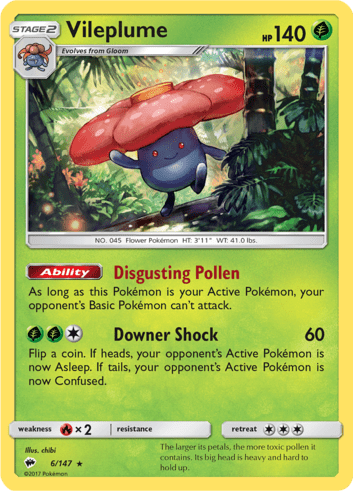