6P welcomes back Brent Halliburton on a multitude of topics…

There was some chatter on Facebook about how attendance was down at tournaments, possibly due to the Expanded format or rising prices. I wondered if there was a way to get a little bit of science applied to the problem. I asked Christopher Schemanske if he had a data set I could use for a quick linear regression and of course he did. So here is what I did: I looked at every Regional in the last three years and scored it on several attributes…

What did I find?

The results were just okay. The R Square was only 64%, so theoretically 64% of attendance can be explained by looking at the variables I looked at.

Format
Is is Expanded’s fault? The P-value for Format was the highest of any variable on this list, which means that it was very bad at predicting attendance. A professional mathematician would conclude that this variable is not a factor and not use it in future analyses.

Regions
East Coast and Middle America (except Toronto) increase attendance dramatically compared to West Coast tournaments. Toronto is far worse than the West Coast. Furthermore, the East Coast/Middle America flags had the lowest P-value, which means they are highly predictive.

Quarters
There is little “people stop playing” effect that was visible. The P-value indicators were ok, not great, but what they showed was that Jul/Aug/Sep and Jan/Feb/Mar are the best times for tournaments and Oct/Nov/Dec is actually the worst time.

Finally, attendance is growing! The P-values were OK, not amazing, but generally attendance has grown year over year. The jump from the year prior to last year was more dramatic than the growth in the last year, but it is still there.

I have now been one of the amazing commentators for CriticalHit at five tournaments and it has taught me a ton. First, it drives home what an amazing job people like Pooka do providing keen insight. It’s worth keeping in mind that the difference between Pooka and every other commentator you have ever seen is that not only is he a great commentator, he is a better Pokémon player than everyone playing. Do not forget that his last real tournament was Ft. Wayne Regionals 2014, where he went 7-0-2 Day 1 with a totally rogue FairyBox deck. This was during the brief, insane era where you had to completely change decks and formats for Day 2, so he demonstrated a better understanding of deck-building, testing, and the format than anyone else in Pokémon. That’s legit.

I am amazed and impressed at how over the last few years groups like CriticalHit have dramatically improved the quality of the rigs, camera, lighting, and streaming experience.

I talk all the time about how it turns out you need an element of RNG or out-of-the-box non-linearity (or both!) to create drama in storytelling. Let me give you two examples:

One thing you could take from these stories is that Blastoise is a super high-roll deck, but the other is that the randomness of outcomes is what creates the drama of Pokémon. The things that are impossible to control are the things that are most exciting about the Pokémon TCG from an outsider perspective. Of course, if you are Mees or Alex, one could not unfairly say they are the things that put you most on tilt.

The Grind/Free (Albeit Useless) Lists

The small size of Greensboro and Toronto resulted in lots of calls by people that pay attention to these things that Masters should go to try and get some cheap points. Interestingly, I think the opposite is somewhat true for Juniors/Seniors. I have talked a lot about the “box out” effect in Juniors previously. In Masters, they look and say “Getting Top 128 pts in a field of 400 Masters is as easy, yet yields more points than Top 256 in a field of 800.”

This may be true. Unfortunately, in Juniors when there are fewer than 48 entries, if there are only points for Top 8, you have to outperform the same guys that make Top 8 in Juniors at a tournament with many more people. The top players are so high travel that they are everywhere. So targeting really big tournaments makes way more sense for Juniors and Seniors than targeting small tournaments. Even really tiny tournaments like Special Events in Mexico and Central America—in Seniors, Tanner H., Regan R., and William W. will show up! So three Top 16 players are suddenly dueling with you to try to get the win.

Our worst tournament in a long time. Liam felt like he had played the wrong deck and wanted a chance for revenge so we booked Memphis on a lark to see if we could turn things around a little bit. He actually liked ZoroPod, but felt like he got stalled out too frequently. Without time constraints, he felt like ZoroPod was BDIF, but he just ran out of time to deck people throughout the tournament.

Liam played ZoroRoc. We felt like it was a deck that always won when it went first so then we just had to steal a few games going second and we would have a strong tournament. And lo, we lost only one game going first.

The following day Liam played the League Cup and played a spread deck of his own creation. He got to the finals v Isaiah Bradner and then we had to scoop and dash to the airport. I am fairly confident in retrospect that his spread deck was BDIF.

Rather than using Passimian to slow down Zoroark decks, this uses Sudowoodo to keep it from one-hitting Koko or Oranguru and then you can loop Acerola and Hammers until they can no longer attack.

This would be much worse now, in a meta filled with PikaRom, Muk, and Lucario.

R1: WLW v Bodhi Robinson (ZoroGarb) — Bodhi played VS Seeker for Guzma for KO but the Guzma had been Lost Zoned the prior turn, with neither Bodhi nor Liam noticing until a Red Card play a few turns later. So Bodhi gets an unfortunate game loss in a tight game.
R2: T v Brian Bacigalupi (ZoroExodia) — They did not finish one game. Liam felt like he was destroying him—he Lost Zoned 14 cards, but he could never get rid of the Oranguru. Brian won every other game in Swiss and did not lose a game until Game 1 of Finals in Sudden Death. We take moral victories, I suppose.
R3: LL v Rowan Stavenow (Trev)
R4: LWW v Kevin Sun (Exodia)
R5: WLW v Owen Steuernagel (Blastoise) — He missed Archies T1 after compressing both Blastoise. Liam Get Losts both Blastoise and he scoops.
R6: LL v Grant Shen (ZoroControl) — Grant had a teched-out version of the mirror that rolled over Liam.
R7: WW v Roman Chouinard (ZoroGarb)

Liam added a 2-2 Trev line to Hitmonchan in testing because he wanted more oppressive wall choices. He almost switched to Blastoise at the last minute, but he told me the night before “I might go 2-5, but I just have a vision of myself playing this deck at this tournament!” If you are wondering why decks like Hitmonchan don’t play walls like Hoopa, Liam’s thinking was that it was important to play walls that kept people from doing things. If you didn’t take away options, they would be able to pull off plays. Trev and Wobb take away the ability to do things, so they are inherently better walls than passive walls like Hoopa or a Wailord-GX.

I thought that was good insight and was interested to see how Liam did with a deck he created virtually from whole cloth.

I won’t deep dive on lists from past formats as I don’t think it is super helpful, but I think the point one could really take away from this in an interesting way is that you see the same names over and over again. And they see us. It is a small, engaged community of tryhards.

There was a big thread on Facebook recently about what has to happen to grow Junior attendance. As someone that has written extensively on the subject, other than rehashing my previous comments I don’t have that much to add. But I wanted to do something here, so I did the same regression above on Junior attendance. The only thing I did was I added Masters’ attendance to see if there was a correlation there.

It turns out that Juniors are far less likely to play Expanded than Standard. This was a much bigger deal for Juniors than Masters! AMAZING! Also, Masters attendance is pretty predictive of Junior attendance. Despite that, attendance is shrinking. Each year attendance has gone down. Also, I discovered why I felt like looking at the Northeast was somehow important—my own bias! Northeast was definitely a driver of attendance in Juniors.

Take from that what you will.

The only other thing I would add is that I have a funny story from Greensboro. Round 1 was kicking off and I saw a young kid with his mother on their way out of the venue. He was holding a small stack of pretty dog-eared cards and seemed a bit down. I had some crazy feeling about them so I went and introduced myself. Lo, he was a kid that had collected cards for a year or so, but never attended any Pokémon event previously. Despite the fact that he had never played a single game, he had somehow gotten registered for Juniors and submitted a crazy, crazy decklist (~50 Pokémon, 2 Energy). I sat him and his mom down and spent 2 hours teaching him to play. He and his mom had realized before Round 1 even started that they were totally out of their comfort zone. I hope that spending some time with Leo helped him have a good experience.

This begs the question: How did this happen? Is it scalable or replicable?

Maybe more importantly, the fact that he found his way here without ever having gone to a local League implies that there are probably opportunities to connect local Leagues to nearby events in a more direct way. It would be great if TPCi could figure this out.

We are on the grind a bit more than we have been in the last year and a half. We will be in Denver, Germany, Hartford, and Madison for sure. I have never visited any of those places with the exception of Hartford so this will be a fun few months! As always, come say hi! 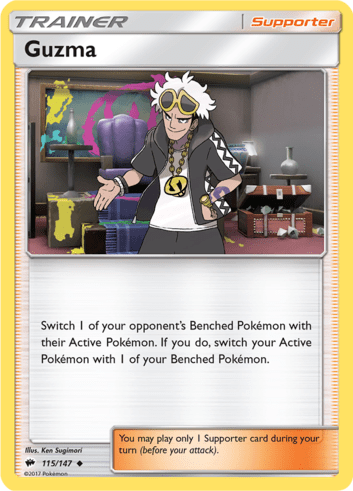