I’m back SixPrizes readers and I’ve played enough games to have a strong opinion about the format heading into the World Championships and DC Open.

With a little under three weeks left until the big event, players are diligently testing and figuring out what decks are working for them and what aren’t in their own games. I’ll share with you all some of the things that I have learned through my testing in the past two weeks that have been crucial in moving forward and deciding what I want to play and what decks to table for now.

Through the Fire and Flames

What do I personally like right now in this jungle of a format? The answer is anything that has Fire in it and can 1HKO a TAG TEAM. I’ve tested Green’s ReshiZard, Peter Kica’s ReshiBlowns deck that he will be writing about in his next article, and regular Blacephalon-GX/Naganadel, and found myself loving all three of the decks due to their sheer firepower, no pun intended. The allure to me for the Green’s-based decks has been how simple the decks are in their gameplay but how much you can do with the deck-building process because of Green’s Exploration. You can play a lot of 1-of Stadiums and Items because you can grab them with a single Supporter and not worry about it. Blacephalon-GX/Naganadel is a little more streamlined in how it plays and operates, but it is still incredibly powerful due to having access to Persian-GX’s Cat Walk Ability to fetch out those Beast Rings on the crucial turn. With the only real hand disruption being Reset Stamp, it’s almost certain to fetch a couple of Energies on that turn you need to flood the board with them.

This has been my personal favorite out of the three aforementioned decks because of Volcanion. The card allows you to sit back and power up two big threats before you decide that you want to go in and play the game. If you opponent burns 2 Custom Catcher to bring up a ReshiZard and smack it, then it better be a 1HKO or you aren’t scared. If they do a small amount of damage to the ReshiZard, then you can use your plethora of healing cards to fix that problem easy, or return the KO and go back to business as usual. The deck can pivot pretty easily and protect those last few Prizes from being taken—to your opponent’s dismay—which is why I like it so much.

As you can see from my list, it differs a bit from the one fellow SixPrizes author Jon Eng posted last week and I’ll explain my differences in the deck-building process.

I think that 2 Switch is absolutely needed to move around your attackers and make it difficult for your opponent to take Prize cards after softening up your big attackers. It is also crucial to pivot into Volcanion early if you don’t open him as your starter. Playing only 1 Switch leaves you with the chance to have it prized, and all of a sudden the game becomes incredibly difficult to play because you no longer have that mobility option, and Green’s decks are all about having options to play.

While this card is strong, I don’t feel like you want to play too many copies or it’ll clog up your hand. I felt like 4 was too many and 1 was too little, so the correct number felt like either 2 or 3 for me. I wanted to include a higher count of Power Plant, so the natural cut came from this slot when I was testing. This card is super useful in matchups like PikaRom and Dark Box where they don’t take a 1HKO easily.

Why play one? “Why not play one?” is my answer to that question. You’re playing a deck that relies on getting an attachment off every turn and have a Supporter that grabs any Trainer cards in your deck, so there’s no reason to not play a Fiery Flint. The 1-of copy can accelerate a bad start into a decent start just by having an Energy card to work with or to set up a Welder for the next turn and draw 3 more cards.

Power Plant is being underrated right now. There are a lot of decks that rely on Abilities to function (like PikaRom) and an early Power Plant can stifle their setup, letting you get far enough ahead to set up a checkmate scenario. Fringe decks like Keldeo-GX and Whimsicott-GX are also rising in popularity, and 2 copies of Power Plant makes it so the matchup is extremely favorable by shutting off their hard-to-deal-with Abilities. Paired with Reset Stamp, it can just win you a game by shutting off something like Dedenne-GX that allows your opponent to reset their own hand.

What are we afraid of?

What is this deck really scared of playing against? The answer is nothing. The deck is strong because of the points I touched on above, but it has two big issues that can strike it down:

PikaRom is a really good matchup because you have the single copy of Shrine of Punishment to take your 1HKO on them, and they have to use their GX attack to take a 1HKO on you. Once Tag Bolt-GX is used, you shouldn’t be afraid of anything in their deck anymore.

If you guys didn’t know, the theme for this year’s World Championships was just announced and we’ve got ourselves a spelunking Pikachu. In the spirit of that theme and the deck that I have poured the most time into, we’re going to talk about Beheeyem paired with some of his prehistoric buddies.

Right out of the gate I thought Beheeyem was a strong card, and I wanted to make it work, but I couldn’t quite find the right synergy for it. Now that I’ve had enough time to test and refine the list, I’ll be talking about how it works and why it’s a possible play for the Big Show.

The strategy of the deck is to constantly use Beheeyem in a perfect lock scenario while promoting Aerodactyl-GX to force your opponent to expend extra resources to deal with it while not being able to use Item cards. Aerodactyl-GX has a neat GX attack that deals with ReshiZard-GX and PikaRom-GX pretty easily if they’ve already taken a little bit of damage.

Breaking the Deck Down

Jirachi is crucial to early-game setup in finding the pieces we need to establish the lock. Finding a Stadium on turn 1 or 2 is absolutely vital, and Jirachi helps us dig deeper to find that piece and establish those Aerodactyl-GX. Turn 1 we typically play out a majority of our hand, so finding a Lillie or Cynthia is also important to making sure we don’t run out of steam and miss a turn of the lock.

The deck typically doesn’t need more than 1 Beheeyem out attacking at once, but because we have no way to search our Prize cards reliably we’re forced to play 3 Beheyeem in the deck. Getting an Elegym down is important, so 4 is required for the deck to function, and it’s not too bad to have around because we already play heavy counts of Pokémon Communication.

These are both flex slots for Wall options in the deck. The nice thing about both of these guys is that they evolve from Ditto p. Alolan Ninetales is meant for matchups where they don’t typically play a non-GX attacker or have already shown it onto the board. Typically the opponent might commit to a big GX attacker and that’s when this guy shines by coming in and ruining your opponent’s day. Honchkrow-GX is something I’ve been experimenting with because some Stadium cards have been proving to be a bit troublesome like Viridian Forest and Giant Hearth because it allows my opponent to still execute their game plan without having the use of Items. Oh, it’s also really good in the mirror match if that ever comes up.

This guy is the main draw engine of the deck and is absolutely crucial to set up. Without Zebstrika in play we can’t consistently run through our deck and set up a Beheeyem every turn to keep the lock up. Finding the Blitzle is a little tricky, but with the large amount of Pokémon we have in the deck and Pokémon Communication, it shouldn’t be super difficult.

The best part of a lock style deck is to disrupt your opponent constantly while you do your strategy. In addition to Item lock, using Judge or Reset Stamp can set your opponent back and buy you the time that you need to come back into the game. Judge Whistle acts as a free draw 1 card if you have a rough start or need an extra card in the early game, and late game acts as another Judge, which can be the make-or-break for you winning the game while setting up the lock.

Typically lock decks that are styled like this don’t want to play anything other than the Energy they use to attack, but F Energy seems too good not to play. I’m unsure if 2 or 3 is the correct number, but there can be a pivotal turn where it’s okay to break the lock to exhaust your opponent’s board of all of their resources by taking out their main attacker using Aerodactyl-GX’s GX attack. More often than not your opponent won’t be prepared for this either, so it can catch them off guard and steal an easy Game 1 for you.

What are we afraid of?

The most obvious answer is a dead opening hand and not setting up. The second answer is missing the lock too many times in a row and just losing the game. Honchkrow-GX is a scary threat to deal, with but I don’t think anyone will be playing that come the World Championships/DC Open. If this deck sets up and fires on all cylinders it feels unstoppable, but setting up is its biggest issue. Power Plant also can pose a threat in dealing effectively with your Aerodactyl in tandem with Reset Stamp. Getting the deck to be low enough to Sprint into your lock every turn is the toughest challenge, and that might not happen for a large part of the game.

That’s all from me folks. I’ll be back right before Worlds with my final thoughts on the format and my testing before I head into a bootcamp with some friends and fellow SixPrizes writers who are coming down early to hang out with me. As we draw closer to Worlds, my excitement cannot be contained and no matter what happens I’m just excited to play and see everyone again. Good luck to everyone in their own testing and practice and hopefully you find the deck that’s been calling out to you sooner than later! Time is ticking fast and we’re almost there, Trainers! 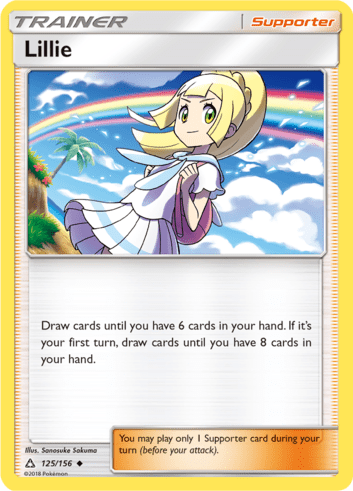