Hello there 6P! I am back again with a new article just in time for Knoxville Regionals this weekend. I was able to make Day 2 with a unique take on Mew Box paired with Ninetales TEU in Atlantic City. For this next article, I’ll be discussing the list I used at Atlantic City and changes to make to it moving forward. I’ll likely be playing the deck again this weekend in Knoxville as I feel the deck has enough options to navigate the format. The deck is also a lot of fun to play.

with a unique take that had cards like Weakness Guard Energy and Shedinja LOT. Pablo Meza discussed these decks in depth on Sunday. My take on Mew Box is quite different yet still strong. It’s cool to see that Mew Box can be played a number of different ways yet still function well.

This inclusion was mainly for Malamar. Eevee-GX can do 100 damage, which is enough to start taking cheap KOs early on. Once Eevee-GX gets attacked by Giratina LOT, that is where Ascension DNA comes in handy. You are able to fully heal Eevee-GX and take another KO with Flareon-GX. Theoretically, you can take 3 Prize cards (or more) with this strategy. This is good because you will be giving up just 2 in return.

I always look to deck my opponent out with Burning Magma-GX as a win condition if possible. I actually won a Game 3 against an Ability ReshiZard in Atlantic City by doing this. Overall, this card is too good not to play in any Mew Box build.

I was surprised to not see this inclusion in any of the other Mew Box/Ninetales lists from Cologne and Campinas. I feel that Turbo Strike, which accelerates Energy, is too good to pass up. Being able to power up attackers when you’re unable to find Welder is important.

I was afraid of Blacephalon-GX/Naganadel, so I decided to keep Tapu Fini UNM for that matchup. It’s also useful against decks like QuagNag because they play Poipole (an Ultra Beast), so you can take a first-turn KO and maybe even a few other cheap Prizes with it.

As you can see, my Day 1 started strong with a 5-0-0 start. However, it quickly went downhill from there as I hit an auto-loss and a 50-50 matchup. Going into Day 2 I was feeling somewhat confident; however, I ran into three Malamar, which is a troublesome matchup, even with Eevee + Flareon.

I decided that the Malamar matchup was still difficult to overcome, even with Eevee-GX/Flareon-GX, so I dropped the Eevee package to add in a 4th copy of Jirachi TEU to help boost consistency as well as be less prone to PikaJudge. I added in Heatran-GX because it’s also useful against Malamar, plus its GX attack can get around Tag Purge and threaten a big KO.

After that, I said well okay, if I’m adding in a 4th Jirachi TEU, then I think 2 Escape Board makes sense, so I dropped a Switch. It would be nice to be able to fit 4 Switch, and I can see keeping the 4/1 split because of Absol TEU seeing more play.

Lastly, I dropped 2 R Energy for 2 Fire Crystal. Now, there is merit to going down to 13 R Energy and 3 Fire Crystal. However, with 14 R Energy, I still have the option of Victini p to 1HKO a PikaRom.

Pidgeotto Control was able to place 2nd at both Atlantic City and Cologne. Sprint is an out to Reset Stamp/Mars shenanigans. Ditto p would also be useful with Magcargo-GX should you need to evolve into it. Not to mention, it acts as a 3rd Vulpix TEU.

Tord’s deck may see play this weekend in Knoxville. If that’s the case, then Giratina UNM may actually have use now. Being able to remove their Weakness Guard Energy out of nowhere can put you in a good position and catch the opponent off guard.

PikaRom took up half of Top 16 at Atlantic City, which was crazy to see. Mew UNB can help deny that extra Prize card and minimize Tag Bolt-GX‘s damage. Mew UNB also is great against Naganadel-GX UNM, which Mew Box and Blacephalon-GX/Naganadel love to abuse. Mew UNB also has merit against Umbreon & Darkrai-GX.

Danny Altavilla’s Top 8 list from Atlantic City may see more play, which is the more troublesome variant of PikaRom against this deck. That is because it plays 4 copies of Judge, which are annoying, especially on the first turn.1 Power Plant can cripple us if timed right too, as I mentioned. I hope most players decide to go with Ryan Antonucci’s Top 8 list from Atlantic City instead because it’s a lot easier to handle.

This matchup I feel is 50/50 because it’s basically a stalemate until someone draws either Custom Catcher or Ninetales TEU first to take the first 3 Prizes. Now, this can get tricky because the Mew Box player can start attacking with Tag Purge to take Prizes. To combat this, you have to start powering up Reshiram & Charizard-GX or Heatran-GX to get past Tag Purge and threaten a KO.

It also depends if the opponent decides to drop down Jirachi-GX. If they don’t know what you are playing, then you can possibly take them by surprise with a 1HKO on their Mewtwo & Mew-GX (without Jirachi in play) with them thinking you are playing Ability ReshiZard.

This variant might be a little favored, only because it does not play gust effects. This means you should always be able to take the first KO on their Mewtwo & Mew-GX. However, cards like Weakness Guard Energy and Shedinja LOT can be annoying and make it more difficult for you to take a Prize. Try to take down an early Nincada if possible and work your way from there.

Turtonator DRM is a great attacker, though you have to watch out for a Venom Shot snipe onto it if it’s not ready to attack. This matchup can be tricky depending on how the opponent sets up.

This matchup is favorable if you play Tapu Fini UNM. You can transition into numerous attackers, just try not to use Mewtwo & Mew-GX if you don’t have to. The deck has plenty of other ways to take down Blacephalon-GX in one blow that do not require your TAG TEAM.

If the opponent is smart they can actually play around Tapu Fini UNM by not benching more than 1 Blacephalon-GX and using Naganadel-GX as an early attacker on Beast Ring turn.

This is one of your easier matchups. This is because you can go straight into either Reshiram & Charizard-GX or Heatran-GX for a KO then immediately transition into Turtonator DRM for the game. This way you can take down 2 GardEon in 2 straight turns.

Now, you still have to be careful of cards like Power Plant and Reset Stamp, so be sure to preserve your Stadiums and Dedenne-GXs if you don’t have to use them right away.

As you saw in my tournament recap, I went 2-1 against this matchup at Atlantic City. This matchup is fine. You need to watch out for their Heatran-GX and Turtonator DRM, so try and play around them. Blacephalon UNB can be a tricky card to play around because it is meant to take a big KO at a moment’s notice, so keep track of how much Energy the opponent is stacking up in the hand and how many Fire Crystal they have left. Use Reset Stamp wisely.

The GX-heavy variant is easier because they are more forced to go into multi-Prize attackers, allowing us to win faster.

That will conclude this article on Mew Box with Ninetales. I’m glad I wasn’t the only one to play the deck; it saw some success at all three event the past weekend:

I expect it to see more play now that people know the deck works well, even with a mix.

If you see me in Knoxville this weekend, stop by and come say hello.

1 Recently I played in a League Cup to where my opponent used Judge going first, and I kid you not, my 4 cards off of the Judge were 4 R Energy and I opened with Mewtwo & Mew-GX. My topdeck was a Vulpix TEU, then another R Energy, and I was doomed as he also had a turn 2 Full Blitz + Power Plant. 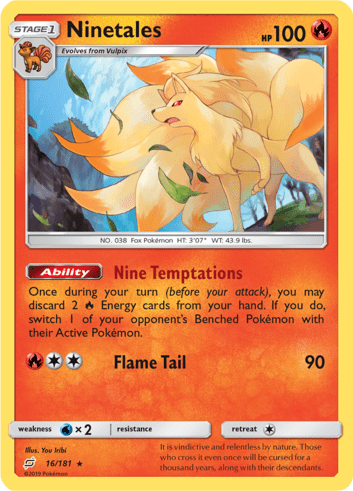