Hey there 6P readers! For those that don’t know, I was able to win Hartford Regionals back in May with Rayquaza-GX. For this next article I’ll be discussing the changes I’d likely make to it going into Richmond Regionals. I still believe Rayquaza-GX is a strong contender in the Expanded format and that is why I’m sticking to my guns.

Before you say “Isn’t Turbo Dark just stronger and overall better?” I personally say no because Rayquaza-GX (A) has other attacking options that can help in specific matchups and (B) is able to utilize 1-Prize attackers more efficiently, such as Shaymin p. That’s not to say Turbo Dark is bad, because it’ll definitely see lots of play and, quite frankly, maybe even more than Rayquaza-GX. A lot of players underestimate Rayquaza-GX and honesty that’s why I was able to win Hartford with it, by catching people off guard with a threat that could overcome anything given the right scenario.

This exact 60 was able to place 9th (Greensboro), 9th (Daytona

), and 1st (Hartford) at the last three Expanded Regionals—two by me and one 9th from my buddy Jeffrey Criss. I had a lot of faith in the list and kept playing it, and ultimately it put up great results. Expanded has always been a crazy format, and that’s one of the main reasons I decided to play Rayquaza-GX in Expanded for so long. The deck finds ways to win tough matchups.

One important tip—and really no matter the matchup—is to use your Sudowoodo GRI before the opponent uses theirs. This will be very important in many matches because Sudowoodo does hurt us.

This card is played strictly for its Rebirth Ability to fuel more Energy onto the board. Against TAG TEAM-heavy decks, I recommend you try and get both Ho-Oh-EX DRX on the board as quickly as possible to maximize your damage or have enough for a big KO when the time comes. Rebirth is a flip effect, so getting Ho-Oh-EX DRX in the discard quickly is important to have more time to flip heads when needed.

Tapu Thunder-GX is what makes this card so great. Against decks that have a hefty amount of Energy in play is where Tapu Thunder-GX shines. For example, against PikaRom, ArchieStoise, Turbo Dark, and more. Its Ability, Aero Trail, can come in handy as well to because it can put Tapu Koko-GX in the Active from the Bench. This is one way to get out of Special Conditions, namely Paralysis against Shock Lock.

This is a great card that gets overlooked. I’ve won games with this card out of nowhere not only with its Ability but also with its attack. Its Ability, Flashing Head, can auto-win matchups that play strictly Special Energy. Some of these decks include Mewtwo & Mew-GX, Zoroark-GX, and more. Rumbling Wires is a great attack to try and deck out the opponent, forcing them to discard resources.

Against Jolteon-EX (assuming they play only Special Energy) what you can do is use Xurkitree-GX as a wall. This way the opponent can’t hurt you, though against Jolteon-EX you can still discard the top card of their deck, eventually winning the war and decking them. However, be wary of Silent Lab and Power Plant as they both can shut off Flashing Head.

Now, its GX attack, Lighting-GX, can do wonders. Putting the opponent at 7 Prize cards and eliminating 1 card from their hand can be crucial. Something cool you can do is use Let Loose or N to a low hand and then use Lighting-GX to hopefully force an unplayable hand. Overall this card can do some nice tricks.

This card was phenomenal against decks like Night March and Vespiquen. However, I don’t think it has merit anymore as I think these two decks won’t see much play moving into Richmond.

I decided to drop Mr. Mime PLF for Mew UNB because they essentially do the same thing, except Mew UNB can do some spread damage if needed. The other difference is their Hit Points, but 10 more HP shouldn’t matter too much.

The other change I did was replace Oricorio GRI 56 for a Mew FCO. I believe Mew FCO will be more effective in the long run, especially given that it can 1HKO a Mewtwo & Mew-GX should you have just 5 Energy in play. Not to mention, Mew FCO is a solid opener since it has free retreat just like Shaymin p.

I’ve been contemplating whether I should play this card over Mew FCO and to be honest I’m still debating it. I can see merit for both cards. Mewtwo & Mew-GX has a higher chance of surviving an attack and being able to take at least 3 Prize cards before it gets taken down. Not to mention, it can copy all the other GX/Pokémon-EX in the deck, giving you even more options. You can even abuse the opponent’s Dimension Valley to do an attack even quicker.

I used to play this card prior to rotation in Rayquaza-GX/Vikavolt SUM. I can see this card being good in Expanded as well. Being able to threaten a KO with little Energy in play against both PikaRom and Turbo Dark can be game-changing. I really want to include this card because what you can do against both of these decks is use Tapu Thunder-GX for 3 Prizes then transition into Marshadow-GX for the last 3 Prizes thanks to the Weakness.

This is a great card against Power Plant, which could give this deck trouble. Not to mention, you can use it as an attacker against Buzzwole FLI/Garbodor GRI. You can search for Marshadow UNB with Mysterious Treasure, which is cool, too.

I want to play this card so badly, but I just can’t see what card I would drop for it. The list is so tight and everything already in the deck has its place. Pokémon Ranger I want in the deck mainly for Jolteon-EX, but, as I mentioned before, Xurkitree-GX might be able to get you that win anyway, unless you’re against PikaRom which plays mostly basic Energy. You will have to target down Jolteon-EX as fast as possible should the opponent start powering it up. Pokémon Ranger has other uses too, such as against Seismitoad-EX and Altaria-GX.

Pros and Cons of Rayquaza

If they play Palkia-GX FLI, it’ll definitely be a rough matchup depending on how much Energy you were able to build up. Nowadays, ArchieStoise decks are looking to utilize Mewtwo & Mew-GX as the main attacker. You can use Mew FCO to take a 1HKO or Tapu Koko-GX. If they aren’t using Mewtwo & Mew-GX as the main attacker, then you should be able to use Rayquaza-GX for a big KO. Let’s not forget Shaymin p only needs 2 Energy to attack while also having Weakness on cards like Palkia-GX FLI, Kingdra-GX, and Magikarp & Wailord-GX.

Do watch out for Espeon & Deoxys-GX because they likely will play that, so be wary of over-benching too many low-Hit Point Pokémon.

If they don’t play Palkia-GX FLI, the matchup I believe should be favored. You basically use the same route as before and try and take your Prizes accordingly.

This matchup is fine, unless the opponent doesn’t over-bench and is able to get Jolteon-EX attacking. If so, then not much you can do. You will have to set up as fast as possible and wait until the time comes to Guzma–KO Jolteon-EX before it attacks. Make sure to have the option to put Mew UNB down for when the opponent is threatening Tag Bolt-GX. You can also punish them with Tapu Thunder-GX. You will also want to prioritize Sudowoodo GRI so they can’t blow up too much turn 1.

This matchup is tricky but slightly unfair, unless they play only Special Energy, in which case Xurkitree-GX should be able to win the game for you. Even if they play 1 basic F Energy you still want to use Xurkitree-GX to stall a few turns and take a few Prizes. Rumbing Wires can mill crucial cards too. The opponent will likely want to get rid of Xurkitree-GX with Sledgehammer. There is a way to bypass it though:

You will have to use Rumbling Wires on either 3 different Wobbuffet PHF then use Mew UNB to knock them all out at once. If you are able to do this, then the game should be yours. Or you can take 1 Prize first then KO 2 Wobbuffet PHF at once.

This shouldn’t be too hard as Wobbuffet PHF can hurt Xurkitree-GX because of its Ability that shuts off Flashing Head. You can also use your non-GX/EX attackers to trade Prize cards with such as Mew FCO (which attacks through Wobbuffet PHF), and Shaymin p.

If the opponent plays Vileplume BUS and gets it out then quite frankly there is nothing you can do. The deck has zero outs to Vileplume BUS.

That’s the thing with Expanded—you just don’t know what you will face up against or what crazy techs the opponent is playing until it’s too late.

So far this is the hand lock I’ve been seeing. If this is the case, then you should have an auto-win against them should you get Xurkitree-GX down before they lock you. All you have to do is put it down. Even with a dead hand, eventually you should be able to deck the opponent out. All you will need to find from here on out is Energy cards to start using Rumbling Wires until victory.

This matchup might be slightly unfavorable. What you want to prioritize—instead of using Stormy Winds over and over—is Tapu Koko-GX as the main attacker as much as possible. Sky-High Claws will be very effective against them while also having no Weakness. So try and use as few Items as possible and only use Rayquaza-GX unless you need to. Don’t forget about your non-GX/EX attackers too.

That will conclude this article on Rayquaza-GX for Richmond. I truly believe it still has a lot of merit and is a force to be reckoned with if not prepared for it. I’ll be messing with it some more before heading into Richmond for some last-minute changes, though right now the list I presented will likely be the exact 60 I use. If you see me in Richmond, stop by and say hello. It’ll be interesting to see who and what deck ends up winning Richmond now that we have a couple of new sets incorporated since Hartford. It’s unfortunate that the new ban list is not in effect until after Richmond and Portland, but I’m assuming TPCi wants to make sure they are doing the right thing for the rest of the world and see the madness unfold before the ban list date. 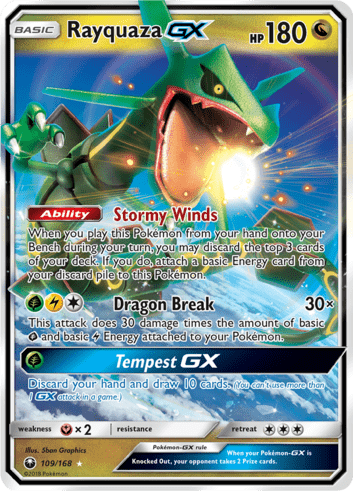