What’s up, SixPrizes readers! Today I’m excited to talk about the new Standard format! With Cosmic Eclipse finally dropping, what was once a dull and Welder-based Standard format can now see more diversity, which will hopefully make the format more enjoyable to play.

Today I’m talking all birds. Yes, every deck that plays Pidgeotto. Brace yourselves.

With its new additions, everyone attending LAIC

should focus their attention on either (A) playing Pidgeotto Control or (B) countering it.

As always, my lists going into testing are consistency-focused, and most of the techs are added in later. Here’s the list.

I haven’t seen much hype on this card, probably because most players hate using coin flip effects, but this card deserves to be in the deck. In combination with Crushing Hammer, it’s nearly a Plumeria. That is a strong effect to have. In the early game when you are trying to further your game state and stay afloat, having a guaranteed Energy discard can be the difference in prolonging the game.

Will also opens up plays like Crushing Hammer on a Benched attacker while Cold Crush-GXing the Active. The amount of options it opens up makes it worthwhile and I expect to see Will in a few more decks going forward (Blissey, maybe…).

Yes, this too-difficult-to-pronounce TAG TEAM Supporter is absolutely busted. Remove Pidgeotto Control from the picture and this card still has tremendous utility. It acts as a Parallel City effect on both players, which (1) allows you to clear Bench slots and (2) can hinder your opponent’s setup simultaneously.

On top of that, discarding 3 cards from the top of each player’s deck is insane. In the past, cards such as Team Rocket’s Handiwork saw play in Control decks to accelerate the deck-out process, and TRH relied on coin flips. No coin flips here.

A lot of people have been myopic about this card and of the opinion that discarding 3 cards doesn’t give you a win condition because once you achieve the infinite loop, you’ve won anyway. However, when you can randomly discard cards mid game while still establishing the lock on your opponent, you start to eliminate their win conditions much faster. This leads to a greater net win percentage for Pidgeotto.

I usually make unique decklist choices compared to other players, and most of them are consistency-based. With fetching cards from your Prizes not being an option in the current Standard format, I like to include extra copies of cards “you don’t need” because I like to account for prizing variance and add overall consistency. The most notable of these inclusions in this list are the 2nd Pal Pad and 3rd Chip-Chip Ice Axe.

I would personally never play Control without 3 Ice Axe because if you play only 2 copies, prizing 1 is a disaster and allows for no room for error with your opponent’s topdecks. Having extra copies of Ice Axe also allows you to go for double Bellelba & Brycen-Man turns more often in the late game.

As for Pal Pad, this is a personal preference as I like having access to a ton of options and many Supporters in the late game. I feel like prizing your 1-of Pal Pad can make you lose, and I’d rather not lose 10% of my games simply due to variance.

For those who are unaware of what the endgame combo is with this deck and want to learn how to either (A) achieve it or (B) counter it, this is for you.

During the late stages of the game, you want to ultimately hand lock your opponent with any combination of Reset Stamp, Jesse & James, Mars, and Chip-Chip Ice Axe. Once your opponent has no hand and you’re controlling their topdeck, you can either gust up a Pokémon that can’t attack with Custom Catchers or Cold Crush-GX their Active. Crushing Hammers and Absol TEU keep this Pokémon stranded.

After your opponent is locked indefinitely, you can begin the accelerated deck-out. Remember to always keep recycling Ice Axe as you want to continuously give your opponent a dead card on top of their deck.

To begin your deck out strategy, you must draw every card in your deck then play Bellelba & Brycen-Man (BBM), which will discard 3 cards from the top of your opponent’s deck, but none from yours, since you’ve decked out. You can then use BBM every turn, and twice every other turn if you Resource Management for BBM, Pal Pad, and Ice Axe every turn. Once this lock is attained, you should be able to deck your opponent out in the next 3–4 turns.

Note: This makes Pidgeotto Control viable in the Best-of-1 League Cup format, so look out.

Pidgeotto/Blacephalon showed itself at Knoxville Regionals where Jeffrey Criss placed in the Top 16. Being the last North American major event in the Standard format, the deck has not had many more showings, but I have seen it start to pop up everywhere. The major draw of this deck is that it trades favorably with TAG TEAM- and GX-focused decks, being able to pump out a ton of damage really quickly. Let’s take a look at the list.

This deck didn’t get much from Cosmic Eclipse, but it did gain extra space by replacing 4 Custom Catcher with 2 Great Catcher. In those 2 extra slots, I have added a 15th R Energy and a Pal Pad. When testing this deck, I found that there were times where having a 5th Welder would win me the game, especially against non-GX matchups such as Malamar.

Position in the Meta

Pidgeotto/Blacephalon is a contender. Its ability to beat Pidgeotto Control because of your own copies of Pidgeotto, resulting in never getting hand-locked, is a major factor. The addition of Bellelba & Brycen-Man to Pidgeotto Control as discussed earlier can skew the matchup in Control’s favor, but at face value, Pidgeotto/Blacephalon is the favorite. If you play the matchup right and use Heatran-GX to sweep the game, you should almost always win.

On top of having a favorable Pidgeotto Control matchup, Blacephalon also dominates the field of TAG TEAMs.

Pidgeotto/Blacephalon had an extremely bad Malamar matchup prior to the release of Cosmic Eclipse. Being able to spam Spell Tag and Giratina LOT while giving up only 1 Prize spelled disaster for Blacephalon. Malamar could ultimately set up a multi-Prize turn with Cross Division-GX and/or spread damage.

Now, how could this matchup have gotten better without any direct counters you may ask? Well, I think the Malamar archetype is evolving. I do not think the Spell Tag, single-Prize builds are best going forward. With new hitters like Naganadel & Guzzlord-GX now available, I think Malamar will find a new identity in upcoming tournaments, or struggle if it remains the same.

This isn’t to say that you are all of a sudden favored in the matchup as Cross Division-GX and Giratina LOT are still probable inclusions. You will just have an improved matchup percentage because of less of a focus on single-Prizers and spread.

Mew Box is another matchup that was somewhat sketchy because of the power of Cross Division-GX. Now, because of Mimikyu CEC 97, Mew Box decks have to adapt. They will be forced to include copies of Stealthy Hood in order to compete. In order include Stealthy Hood, perhaps Reset Stamps will find their way out of lists, which, in combination with Cross Division-GX, is the main combo Mew Box used to win the Pidgeotto/Blacephalon matchup.

Overall, I think Pidgeotto/Blacephalon is pretty well positioned and I expect at least a few South American players to pilot it. (I don’t think many NA players attending like the deck.)

This has been on my mind for a while, so I thought I’d share it with everyone. There are a couple of cards that I think should have a serious target on their back for potential bannings, namely Oranguru UPR. This card has singlehandedly created countless Control and Mill archetypes throughout its legality in both Standard and Expanded. Any card that creates infinite loops should not exist in my opinion. If we see a spike in Pidgeotto Control or any new Oranguru Control decks make Top 8 at LAIC (I define a “spike” as four or more), I would personally like to see action taken. If you agree/disagree, let me know why!

I’d like to wish everyone attending LAIC good luck. Make sure your deck has an answer to Control or you play Control yourself. Have fun in Brazil if it’s your first time there. I’ve heard it’s an amazing time. As always, feel free to hit me up on Twitter @PeterJoltik with any questions. Additionally, even though I’m not attending LAIC, I will be posting the 60 I’d be playing if I was over on patreon.com/PeterJoltik. 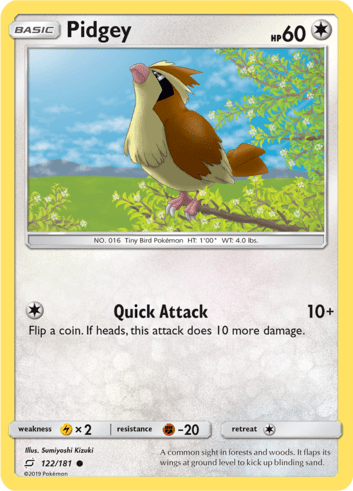