Hi everyone! I’m super excited to be bringing this article for everyone right before Daytona Beach Regionals

. With the release of Cosmic Eclipse and the conclusion of the Latin America International Championships

, we saw a lot of old and established decks with a couple of copies of Cosmic Eclipse cards splashed in do really well. Robin Schulz was able to take down the tournament with AbilityZard with a list that was 1 or 2 cards off what I piloted at Knoxville Regionals earlier this season, which showed how powerful the deck still was.

Today I’ll be sharing all of my updated lists for Malamar and AbilityZard. I’ll also provide a list of techs and their uses in each deck and whether you should or implement them or not.

Malamar seems to be in a decent place in the metagame right now. With a majority of the top decks being TAG TEAM-based, a single-Prized deck should be able to take advantage of that. The flip side of the argument, and what I mostly hear as the death of Malamar, is Mallow & Lana. While healing 120 does give Malamar problems, I don’t think that alone is enough to push it out of the metagame. I was able to snag a 1st place at a League Challenge and a Top 4 at a League Cup this past week with Malamar to secure my Worlds Invite. Let’s see the list I used.

This card is a great attacker in a ton of decks, so I thought why not Malamar? Its greatest use is to clean up the end of a game with a 1HKO on an opposing TAG TEAM. With Mallow & Lana in a lot of decks, you want to have the option to 1HKO anything. To set up the play, you can prock a Spell Tag from your previous turn and then, with 3 Pokémon-GX on your opponent’s board, you can Knock Out any opposing TAG TEAM in the game, with the exception of Magikarp & Wailord-GX, which you could theoretically also set up just as easily. The main focus, though, is to set up a for a 270-HP KO (MewMew, ReshiZard) or 280-HP KO (GuzzNag, ADP).

This is more than likely the biggest addition to the deck. This card can essentially act as a pseudo Cross Division-GX on your opponent’s 3-Prize turn. This effect is extremely good versus Pidgeotto decks and any decks that try to set up multiple single-Prize Pokémon on the Bench. Using Blacephalon and then having the option to also use Espeon & Deoxys-GX later lets you clean up a ton of Pokémon and also gives you a buffer to misplays with damage counter placements via Spell Tag and Distortion Door.

Another very valuable inclusion to the deck. It allows you to essentially always have access to a multi-Prize KO on your opponent’s Bench. It is somewhat of a liability in your hand early game, but its power is very strong and worth the early-game downside. I would not pilot any deck in this format without a gust effect, whether it’s Custom Catchers (mostly in Green’s Exploration engines), Ninetales TEU, or Great Catchers as in this case.

There are some worthwhile tech options to look at when trying to build Malamar to account for any anticipated metagame. The most challenging would have to be tackling ADP with Malamar. ADP’s GX attack makes the Prize trade unfavorable for Malamar, and transitioning to 1HKOs without using LoPuff (because ADP tends to bench only 2 GXs at a time) is the correct course of action.

Going back to an Ultra Necrozma-GX-based build, or even a small Ultra Necrozma line, in order to deal with ADP, can be strong. The problem here is that it takes multiple turns to set up because of the limited damage output that Ultra Necrozma has with just 2–3 Psychic Recharges. Unless you choose to include Beast Energy p and ways to search for it (Guzma & Hala), I don’t think it’s plausible to consistently set up. Here’s what an Ultra Necrozma-based Malamar would look like.

I’ve seen this idea floating around and I think it’s pretty cool if your goal is to demolish ADP. With Mimikyu TEU being Fairy type and Copycat able to deal 300 damage to ADP-GX after Weakness, you gain a ton of tempo in the mid-game allowing you to out-pressure ADP. Having a card like Lana’s Fishing Rod to recycle Mimikyu can also be extremely beneficial.

In the GX slot you can choose to swap in either Naganadel & Guzzlord-GX or Garchomp & Giratina-GX. Both have their own niche usages with GuzzNag being more tanky because of its Ability and having 2 Prizes sealed up because of its GX attack and TinaChomp being more of a big hitter able to take big knockouts. Here is what that list would look like.

Choosing the right Malamar build will always depend on predicting the metagame correctly. I personally tend to choose builds that are more consistent because they have less moving pieces (i.e., Psychic Malamar) rather than a more teched out option such as the Unit Energy build.

This format is looking pretty cool with all the new deck-building options provided to us via the TAG TEAM Supporters. I’m excited to see what Malamar builds people choose to bring to Daytona this weekend.

AbilityZard has been one of my favorite decks this season. The deck asks a lot of questions because it’s so aggressive but doesn’t have many answers because of how linear its strategy can be at times. Going into Daytona Beach, I would 100% be accounting for Control decks like Pidgeotto to do much better than they did at LAIC, with none making Top 8. (It’s worth noting though that Doll Stall did make a Top 8 appearance.)

Here is my current list of AbilityZard (teched for Pidgeotto Control):

This list is teched out to beat Pidgeotto with the inclusion of Zebstrika. Much like Robin Schulz, I respect Pidgey and would prefer that my deck always have an out to beating it. I know a lot of players in the community share the same sentiment of not enjoying losing to these Control archetypes; however, if you want to streamline the deck and have maximum consistency, I’d advise you to play the following list:

As you can see, the Zebstrika line was cut in favor of 2 Pokégears. While I’m not a huge fan of Pokégear in general, it is extremely effective in AbilityZard. The reason for that is mainly due to the fact that AbilityZard plows through the deck fast. With Giant Hearth thinning the deck turn after turn by 2 cards, Dedenne-GX drawing 6, and the consistent stream of Welders, you’re going to be playing with a thin deck.

The main focus of AbilityZard is to hit Welder every turn. When you do that, it sometimes feels like you’re unbeatable. With options to beat even single-Prize decks, hitting Welder fixes a ton of your would-be issues. While you inherently now take a big auto-loss to Stall decks, your deck will function optimally in games where you don’t face Stall.

This is where players tend to differentiate themselves. Those who favor consistency will take losses where others won’t. Ultimately, you have to make that decision yourself, but for me personally, I tend to flip-flop between the two sides when I see fit. It’s mainly the luck of the draw and the matchups you hit that ultimately determine if your choice was right or wrong.

I’ve been thinking of including this in some of my builds as a side Evolution via Ditto p. The problem being is that a lot of this format is preying on Bench-sitting GXs like Dedenne-GX, so Volcarona doesn’t really do much in that aspect. My favorite play with Volcarona-GX is being able to ping for 2 damage counters and swing with Victini p when you could otherwise not take a knockout due to not having enough Energy. This can catch your opponents off guard and swing some matchups.

This card can singlehandedly beat Mew Box decks. Because of the transition to Great Catcher, Mew Box no longer has the option to gust and Knock Out non-Pokémon-GX you’re using to set up for big knockouts. The common line of play to counter that is sniping damage via Naganadel-GX UNM, and that’s where Mew comes in to stop the Bench damage.

The setup to beating Mew Box handedly with this combo looks a lot like normal, except you can set up without disruption while simultaneously feeding your opponent Jirachis. You ultimately want to take the first knockout with either Turtonator or Heatran-GX after using Welder twice and saving Energy on board. Then sweep the 2nd MewMew-GX with a big Infinity with Victini p.

I’ve experimented with this card and I do think it may have a place in AbilityZard. Looking back at my list with Zebstrika, I did choose to include it as a 1-of. There are certain games where variance will force you to discard Welders or your Pal Pad early, and that is where Cynthia & Caitlin can come in clutch. The nice aspect of having 1-of Supporters other than Welder is that you only ever use them when you don’t have a Welder in hand and are searching for one. Well, Cynthia & Caitlin does guarantee you Welder if you’ve already played it on top of drawing some cards. While it doesn’t seem optimal, having options to differentiate yourself from others playing the same archetype can win you games at large tournaments.

Daytona Beach is going to shape the Cosmic Eclipse metagame more than people anticipate. I think there will be some creative and new takes on decks as well as maybe some old archetypes reappearing. With it being Thanksgiving weekend, It won’t be one of the bigger events, so I think having the appropriate tech options may be the way to go.

My logic with that is:

Good luck to everyone attending Daytona! 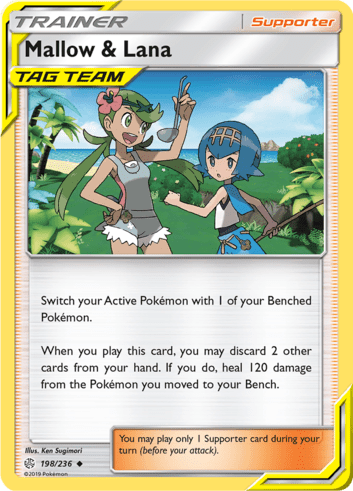