Howdy, SixPrizes readers! I’m back to talk about how my second Regionals in the United States went, San Diego

. After doing poorly in Daytona Beach

with Mew Box, I realized that I would need to do something different for the following week to do well. In this article I talk about how João Pedro Medeiros and I came up with the idea of TinaChomp, the deck that we brought to San Diego and convinced Justin Bokhari, Kian Amini, and Rahul Reddy to play at 10:00 PM Friday night, the day before the tournament.

My first thought was to make the Mew Box list faster and more aggressive, further increasing the chances of making my turn 1 plays even stronger. In my last article I wrote about the importance of Mew Box being explosive in the first few turns in the current metagame and the Mew Box list that I would probably use in San Diego if I played Mew Box. Deep down I knew that Mew Box, despite being an incredible deck, was not the right call for San Diego, as Malamar/Giratina was a popular deck in Daytona Beach and I was not comfortable with this matchup. Also, I don’t think Mew Box a very consistent deck.

With that in mind, my travel partner João Pedro Medeiros and I decided to find a new meta call for San Diego. We had no idea how the metagame could change from one week to the next—after all, it was our first experience playing Regionals in the United States. After some discussion about the metagame, we came to the conclusion that San Diego would be focused on ADP/Keldeo-GX, Pidgeotto/Oranguru Control, Mew Box, and Malamar/Giratina decks, in that order.

These would be the main decks, but metagame reading goes deeper than that. Other decks like Baby Blowns, Florges Dolls, and PikaRom were also part of our metagame reading, taking into account the time between one Regional and another, and for other reasons.

Having the metagame we anticipated in mind, we had the idea to revisit the Naganadel & Guzzlord-GX/Mismagius deck used by Team DDG players at LAIC

. Among the good points that made us consider the deck is the fact that the deck has a favorable matchup against ADP/Keldeo-GX due to Ultra Forest Kartenvoy, which allows GuzzNag to easily Knock Out Keldeo-GX. To beat Pidgeotto/Oranguru Control and Florges/Dolls, João and I came up with the idea of Blacephalon CEC to spread damage. If you Knock Out 3 Mismagius, Blacephalon CEC will start placing 12 damage counters on the opponent’s Pokémon. This play can be done right on turn 1 of the game, but usually you will do it on turn 3 or 4, which is still good.

When we tested against Mew Box and Fire Box, GuzzNag/Mismagius came across many struggles due to the aggressiveness of these decks. To help with these matchups, we decided to fit 2 copies of Power Plant, but the matches were still tough.

During testing with GuzzNag, of course came the idea of also testing the TinaChomp/Mismagius deck that Gustavo Wada played at LAIC. The difference of GuzzNag from TinaChomp is to have a better matchup against Mew Box and Fire Box, as well as keep good matches against ADP and Control decks, as Blacephalon CEC would work in TinaChomp as well.

First I messaged Gustavo to talk about TinaChomp and he helped me with some feedback and ideas. Then João and I started to test TinaChomp. The more we tested to adjust the list for the current meta, the more we realized how strong and good a call the deck was. With the list almost done on Friday, we needed cards to build the deck and further testing to make sure that TinaChomp was perfect for San Diego.

For those who don’t know, playing a Regional in the United States requires all cards in your deck to be in English. All of my cards are in Portuguese, which means I had to buy the entire deck of TinaChomp. Throughout Friday we tried to find someone or a store that could have the cards we needed, as the event wasn’t open on Friday, unlike Daytona Beach where the event was open and with three stores running with all cards available for purchase.

When it was Friday night, we were able to find someone to sell us the cards, so we just needed to test the deck a bit more to learn how to play the deck in different matchups. After buying the cards and finishing the deck, we combined to test with Justin Bokhari (the Champion), Kian Amini, Will Jenkins, Michael Catron, and Kenny Britton.

After we beat ADP/Keldeo-GX, Fire Box, Mew Box, Malamar/Giratina, Pidgeotto Control, and even GardEon in testing, Kian and Justin realized that our deck was an insane call and decided to play the deck. Rahul also learned about the deck and decided to use it too. All this happened on Friday night.

The rest of the story you probably already know: Justin Bokhari won with TinaChomp, an idea originally created by Marc Lutz, adapted for the LAIC metagame by Gustavo Wada, and later adapted for the current meta by me and João. The current World Champion Henry Brand also helped us with the deck and played with it to make Top 8 at Brisbane Regionals.

The big difference here is not just the updated list, but the ability to read the metagame and see that TinaChomp was in a very good position for the tournament.

Everyone knew Gustavo made Top 8 at LAIC with the deck, and later one of the players who played TinaChomp with Gustavo posted the list on Facebook, so many players already knew the deck existed, but few decided to test it or consider the deck a real option for the meta.

About the deck, Pablo Meza and Rahul Reddy have talked about how it works and about the updates that João and I made for the deck.

About my San Diego Regional run, unfortunately I didn’t do very well. After opening 3-0-1, I lost 3 games in a row, with no chance of making Day 2. I spent the whole week sick and stressed and was unable to concentrate very well in my games. I don’t remember doing some big misplay, but I probably made several without realizing it.

Although Justin won the event with this deck which he learned of on Friday night, TinaChomp is a pretty hard deck to play perfectly. I believe all players who used the deck (including me) ended up doing some misplays during the tournament.

Going forward with TinaChomp, I’d like to make some changes to the list simply to make the deck more consistent and play your strategy more easily.

Previously I was on a 4-3 Mismagius line, but I felt that against Pidgeotto Control and Florges Dolls you really need to use 3 Mismagius to get Blacephalon CEC to put 12 damage counters on the opponent’s table. If your opponent discards a Mismagius with Bellelba & Brycen-Man or you can’t use GuzzNag’s Chaotic Order-GX attack to take Mismagius from your Prizes, then Blacephalon CEC will never be able to activate Fireworks Bomb for 12 counters.

During my testing and my San Diego Regional run I almost didn’t use Pokégear 3.0. The main reason for having it in the deck is to increase the chances of getting Green’s Exploration, but the more I played with the deck the more I realized that I didn’t really need Green’s Exploration so badly. This deck needs little to work with, especially in the early turns, so it doesn’t rely so much on Green’s Exploration. Just attach Energy on TinaChomp and draw some cards with Cynthia & Caitlin and we’ll have a satisfying turn.

Since I removed Pokégear 3.0, I decided to include at least one more draw Supporter for consistency. Also I need a Supporter to fill my hand with cards as the deck has many discard cards like Great Catcher, Mysterious Treasure, and the TAG TEAM Supporters.

I played Beast Ring very little and I feel that it doesn’t work that well for the deck. That’s because GuzzNag is just a tech and not the main attacker. I still miss some way to power up GuzzNag without needing a Beast Ring, so I thought about Tag Switch to do that. In addition, the Tag Switch allows you to move Energies between the TinaChomp, who are the main attackers and will be played more often.

Cards I Would Like to Fit If I Had Room

I like this card a lot, but João not so much. It’s not extremely necessary, but I feel that the 2nd copy would be good against Malamar/Giratina, and it is one more card with switch effect, since the deck has only 1 Switch and 1 Mallow & Lana for switching currently.

It would help a lot for the GardEon matchup, although only 1 Weakness Guard Energy can be enough to give you a chance to win this matchup.

This Stadium was part of Marc Lutz’s original TinaChomp list. Martial Arts Dojo would be insane to close some knockouts, but the problem is that the Stadium works only with basic Fighting Energy.

Although I did poorly in Daytona Beach and San Diego, I was happy with the work that João and I did for San Diego. With much discussion and testing we were able to read the metagame correctly and identify the appropriate deck for playing a Regional outside our country. This means that my abilities of reading the meta and deckbuilding are still very good.

My main goal now is to be able to play relaxed and focused. Some friends have suggested doing meditation and others going to a psychologist, so maybe I really will try to do something like that. I will further improve my sleep, diet, and tournament preparation habits, too.

My trip to the United States was quite tiring, but I had a lot of fun. It was a fantastic experience to have worked during the week with João Pedro Medeiros until we got to the TinaChomp deck that ended up winning the event. I’m glad to have evolved even more as a player on this trip.

My idea has always been to invest in my development as a player and give back all that experience back in the form of articles and coaching. I want to work even harder in 2020 to become a better player and consequently bring more quality content as well.

My next tournament will be the São Paulo Regional at the end of January, so I have time to fix my mistakes and learn from the lessons I had on my trip. The format will still be the same (UPR–CEC), but the metagame will probably change.

If you notice, the same shifts we saw in the metagame of the previous format (UPR–HIF) are happening again. Aggressive decks like Fire Box and Mew Box started dominating, and then Green’s decks started to appear more as they could stop the aggressiveness of Welder-focused decks with the famous Reset Stamp + Power Plant combo. The next step would be for decks neither as aggressive nor as responsive to appear, such as PikaRom. The big difference in this format is ADP, which is a consistent and complete enough deck to survive metagame changes.

I hope you enjoyed my article today, I wish you a Merry Christmas and a great 2020! 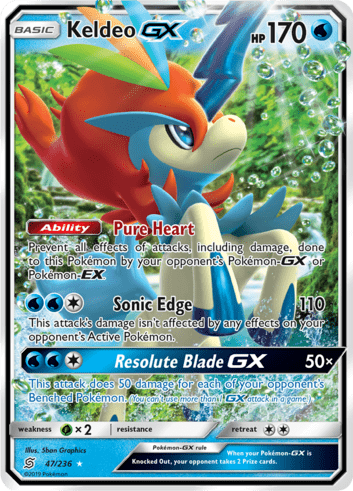 Buy it @ TCGplayer
Directly support Gabriel Semedo, the author of this article, by shopping via the “Buy it” link above. Learn more.