Hello 6P! Welcome back to another article! Last time I wrote, I was in a heavy testing mind frame for Dallas, as I really wanted to secure some Points with the Travel Award for EUIC

on the line. To my own surprise, and many other people’s, I ended up doing extremely well with a deck that I adapted from the Japanese Champions League Aichi tournament.

As a big admirer of Japanese tournaments, I immediately noticed how the combination of Trevenant & Dusknoir-GX with Milotic FLF and Ace Trainer ended up dominating the event. As can be seen here, the deck had three Top 8 placements, along with a few other showings in Top 16 and Top 32. Each build was unique in its own way, but I figured it if it dominated there post-bans, it must be good for us as well.

My initial testing showed a struggle with Turbo Dark, as it was so easy for them to power up and take 1HKOs due to Weakness. I discarded the deck, making a video to showcase it here:

One week before the event though, my friend Alex Garcia encouraged us to give it another go as on paper it seemed strong, and we added 2 Weakness Policy to help deal with Turbo Dark. As we played the matchup more, we started to realize how favorable the match actually was, so we decided to high-roll with the deck and hope for the best. We added in a few more key techs—like Counter Catcher and Mallow & Lana—to make sure we had all of our opponents’ outs covered, and ended up with the following list:

You can find a more detailed breakdown of my deck over here:

Somehow, after two grueling days of hoping my opponents wouldn’t topdeck, I found myself in Top 8, but with ZoroGarb and 2 RowEggs also in Top 8, I didn’t fancy my chances of winning the whole thing. My miracle run ended in Top 8 to fellow 6P writer Jon Eng, but I honestly couldn’t be happier. This is my 3rd straight Top 8 at Regional events (1st São Paulo, Top 8 San Diego, Top 8 Dallas

), along with my first ever Top 8 at an Expanded Regional. My goal for 2020 is certainly to break whatever mental barrier I have that has been stopping me from producing good results at International Championships, and continue to show that I am one of the best players in the game.

Moving forward with Sword & Shield, I think this deck will remain viable and possibly become even better with the inclusion of Quick Ball. However, I do expect it to be more on people’s radar and thus people will be better at playing against it.

Dallas was the last major event in North America before Sword & Shield is released, and so it is time to brainstorm new decks which now have to consider the new turn 1 rule as well. As always, looking into the Japanese metagame gives us some great insight into what we can expect in the near future.

There are three resources that I utilize for this:

From the research I’ve done on the previously mentioned websites, there seems to be a lot of room for creativity moving forward, which is very exciting. The following are the different main archetypes in Standard that you can expect after Sword & Shield becomes legal on February 21st:

And probably others! The big loser is definitely GardEon, as Metal will be everywhere and that’s never a good thing for it. I expect Standard to be healthy and full of different decks, even if something like Zacian V will be a very popular choice.

There’s also a wide array of supporting Pokémon which can be fit into many of these decks, so even though concepts behind decks will be the same, the variation in techs could be what determines which player comes out on top.

We have old favorites like Jirachi TEU and Dedenne-GX of course, along with Absol TEU for disruption. However, from the research I’ve done on the sites I mentioned, it seems like we might see an uptick in Phione CEC, as well as Mimikyu CEC 97 since Shadow Box will be a useful way to keep Mewtwo & Mew-GX decks in check.

The new Oranguru SSH will be a top inclusion as well, seeing how powerful it can be to manipulate our topdeck. It also has synergy with Marnie. Being able to redraw a useful resource after attacking your opponent’s hand seems strong.

Expanded is a whole other monster though and unfortunately, none of the previous resources mentioned actually upload too many Expanded tournament results. They dedicate some time to it after the Champions League tournaments, but there is very little coverage at the local level.

In Expanded I expect the meta to not be as shaken up as Standard will be. It seems like Pokémon have had a serious power creep over the years, between higher damage and much higher HP, but Trainers have been nerfed a bit in some ways. This means that Expanded is the perfect mess of overpowered Trainers and overpowered Pokémon.

Another thing to consider in Expanded is that cards that restrict usage from EXs or GXs, such as Counter Energy, do not apply to V or Pokémon VMAX. However, from the Champions League Aichi tournament, it seems like no Pokémon V will be taking advantage of this yet. New sets might release more powerful Pokémon V that fully utilize this to their advantage, though.

The Expanded metagame should still see the following archetypes:

So far I don’t see too many of the new cards making a big splash into the Expanded meta, but one of the standouts is Snorlax VMAX.

Snorlax VMAX feels powerful enough to compete, as it is a complete upgrade of M Rayquaza-EX, a deck that was considered BDIF in the past, and can hit up to 300 damage off a full Bench and a single Triple Acceleration Energy with G-Max Fall! Pairing it with Cinccino makes sense as its Ability is the same as Zoroark-GX’s, except you can’t be stopped by Power Plant! Winona is another great card in the deck, as it can fetch any of your Snorlax V or VMAX, Cinccino line, and also Shaymin-EX for draw.

at the end of February. Here is what I have for it right now:

I do want to reiterate how this is simply a concept and completely untested, yet it makes a lot of sense to me that it should work!

ebay.comSnorlax VMAX hits like a truck and can take care of anything, given a full Bench, other than other Pokémon VMAX. Buff Padding puts it at a whopping 390 HP, a number not easily reached.

4 Shaymin-EX with Sky Field gives the deck so much power, and it isn’t hindered by not being able to play a Supporter on turn 1 since you have Ultra Ball and Quick Ball for search and setup.

ebay.comThe 4-4 Cinccino line provides much needed support to the deck by being able to continually find resources, especially the Triple Acceleration Energy, in order to attack every turn.

Alolan Muk is necessary to disable opposing Sudowoodo GRI, which will try to prevent you from maximizing your damage.

Propagation means we don’t have to get rid of any resources during a game as we recycle it to draw cards with Cinccino’s Make Do Ability.

I’m going for hyper consistency here. When going 2nd, turn 1 Winona is fantastic to establish Snorlax V, Cinccinos, and Shaymin-EX into hand. After our 1st turn, Winona can find us our Evolutions too.

With the reliance of a full Bench for damage output, Colress becomes a fantastic Supporter, and Guzma and N round out the options that we have. Acerola should help make Snorlax VMAX an even greater threat as I don’t expect anything to come close to 1HKOing it any time soon.

ebay.com3 Quick Ball and 3 Ultra Ball give us a bunch of outs to establish Cinccinos and Snorlax and utilize Shaymin-EX’s Set Up Ability on turn 1. The Evolution Incense also help in establishing our supporting Cinccinos or main threat of Snorlax VMAX.

Field Blower is necessary to take care of Garbotoxin ruining our Ability fiesta with Cinccinos.

Special Charge, Rescue Stretcher, and Dowsing Machine help us recover resources that we might need to close out a game.

Buff Padding puts us at the whopping 390 HP mentioned before. Float Stone is an overall great Tool to allow us to start attacking as soon as possible, as well as have Guzma pivots.

Sky Field means we can have up to 8 Benched Pokémon, increasing our damage output from 210 all the way up to 300—enough to 1HKO any TAG TEAM or Pokémon-GX out there, along with any Vs, other than VMAXs.

Triple Acceleration is all we need for this deck, and with Special Charge we should have enough to outlast even non-GX attacker decks, which aren’t too common in Expanded nowadays.

This is one of the many decks that I will be giving a try as soon as the cards come out on PTCGO. It’s very weird to me that Pokémon would choose to have an Expanded Regional first for Sword & Shield in North America, but we just have to go along with it. I will certainly be practicing both formats extensively in the upcoming weeks, as even though I personally won’t be going to OCIC

, a bunch of my students will be attending the event.

My next article will continue to cover more of Sword & Shield for both formats, as I will have more hands-on experience with the decks on PTCGO. I expect to have consolidated lists for both formats by then.

Having said that, that will be all for today’s article from me. I really appreciate you reading all the way through and hopefully you enjoyed my thoughts. As always, any comments or feedback you might have, feel free to contact me on any of the Tablemon social media accounts, and I will be happy to engage there or in the comments of this article. Until next time! 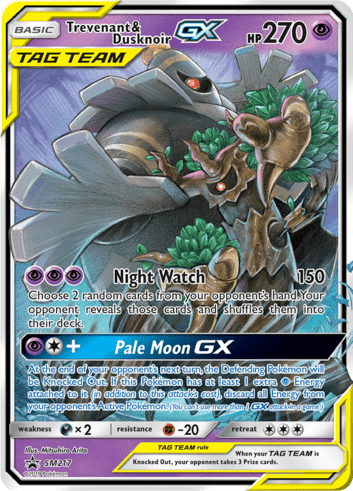