Hello again, 6P readers! I’m glad to be back from Costa Rica

. I was able to get Top 16 in Costa Rica and 80 CP. However, I didn’t get any CP at OCIC, which wasn’t nearly as good as the last OCIC where I placed in the Top 4. My opponents drawing better than me and going first most of the time made my day subpar.

This weekend is Collinsville Regionals

and the Puerto Rico Special Event

. I decided to do Puerto Rico because it’s Standard, and coming off OCIC, I would much rather play in the same format back-to-back. I also have family in Puerto Rico, namely my dad, that I can see, so that was another reason why I chose Puerto Rico over Collinsville.

For this next article, I’ll be looking at the finalists’ decks from OCIC and the deck I ended up playing, as well as changes I’d likely make to each deck. I won’t be in Collinsville, so I haven’t been looking at Expanded much, so I’ll be discussing more Standard for now.

Most of the ADP/Zacian V lists that did well at OCIC played 4 Custom Catcher instead of Pokémon Catcher, so that has to be the way to go. At first, I thought 4 Pokémon Catcher was correct, but there were times where I would flip multiple tails in a row to lose games. However, had I had 2 Custom Catcher to guarantee a Benched Pokémon, then that would have won me games anyway, so I can get behind Custom Catcher.

All the mirror matches I faced played Absol TEU. I lost a game because of it and decided Absol is too good to not play in this deck, so I would replace Galarian Zigzagoon with it. I rarely used Zigzagoon; I wanted to combo it with Mimikyu CEC 97, but a lot of times Bench space wouldn’t allow it.

Marshadow UNB was mainly for Chaotic Swell, so you can drop down Lysandre Labs against Mewtwo & Mew-GX to shut off their Stealthy Hoods. However, I didn’t face any Mewtwo & Mew-GX decks at OCIC. Adding a 2nd Shrine of Punishment seems like it’s ideal while still keeping Mimikyu CEC 97 in the deck, similar to Bert Wolters’ Top 8 list.

I saw most lists playing 3 Energy for ADP-GX, so I think dropping 1 Aurora Energy and adding a 3rd Tag Call is ideal. If you open Tag Call, you should be fine since it nets you ADP-GX and Guzma & Hala to get a turn one Energy anyway. In this deck, a turn one ADP-GX + Energy is key.

I also believe the 2nd Escape Board is just too good with Jirachi TEU. It’s a great feeling when you can promote Jirachi with Escape Board at the start of your turn (when something was KO’d) or when you Switch into Jirachi. It will let you pivot into attackers easier.

I dropped 1 Marnie because 2 should be fine, especially with 2 Reset Stamp to disrupt the opponent.

I start my day off against Galarian Obstagoon. I’m not too happy to see that matchup, but I do have a game plan against it. There is a strategy you can do when they have a lone Galarian Obstagoon. When this happens, you are unable to Catcher or Phione around for Prize cards. What you can try to do is let the opponent get down to 1 Prize card remaining. After this, you Reset Stamp them to 1 and use Dedenne-GX’s Tingly Return-GX attack to paralyze Obstagoon. Now you hope the opponent has nothing, and if they pass you KO their lone attacker or force them to bench more Pokémon. (I used this strategy in Game 2; however, it was too late as my opponent had too many backup attackers by then.)

I ended up winning Game 1 due to lucky Pokémon Catcher flips, as well as Game 3 after I used Altered Creation-GX because of my opponent over-benching.

Round 3 vs. Cinccino Mill I was able to win Game 1 by doing the normal turn two Altered Creation-GX followed by three consecutive KOs. In Game 2 I prized Phione and flipped tails on multiple Pokémon Catcher to lose. In Game 3 my opponent kept having multiple Lillie’s Poké Doll to deny Prize cards every time I had Phione. On top of that, I again flipped multiple tails on Pokémon Catcher, losing what I thought was a near auto-win matchup.

In Round 4 I faced yet another mirror match and lost due to my opponent hitting fortuitous draws off my Reset Stamp to 2.

My next round I’m up against Blacephalon/Naganadel. This was a deck I talked about in my last article, so I knew how to beat it, and that’s exactly what I did with a 2-0 victory.

In Round 6, I was up against PikaRom. I knew this matchup was fine should the opponent not get a turn 1 Full Blitz off. My opponent wasn’t able to pull it off either game, so I was able to Altered Creation-GX both games to take the series 2-0.

As for my 7th round, I hit my 3rd mirror of the day. I finally went first and did what I needed to do to get to the next round.

Having to play against Baby Blacephalon in Round 8 didn’t sit well for me because the matchup is quite difficult. You have to hope and pray once you use Altered Creation-GX that the opponent cannot 1HKO ADP-GX. If they do they will likely win, but if they don’t they just 100% lose every time because the Prize trade is in your favor now. Unfortunately, in Games 1 and 3 my opponent did 1HKO ADP-GX at the right times. I tried my best to slow my opponent down, but he didn’t miss a beat. I won Game 2 because I donked my opponent with a turn one Zacian V attacking and KOing his lone Pokémon.

In my final round, I faced my 4th mirror of the day and went first again. I was able to best my opponent 2-0 and proceed to finish my run with a record of 5-4-0, which was technically enough to get Top 128 and 100 CP. Unfortunately, my resistance was poor, so I wasn’t able to net any CP this time. However, I still had an awesome time in Melbourne despite my subpar performance.

Honestly, I probably wouldn’t change anything in this list. I think it’s perfect. It basically has a little of everything, which is why the same 60 was able to place in the Top 8 twice. Nico and Tord thought this list out quite well and ultimately it netted them great results.

They managed to fit everything, and that is why I believe the list shouldn’t be changed.

I’m not too sure about Lucky Egg since decks are playing Lysandre Labs. However, this deck does have a tendency to brick off of a well-timed Reset Stamp. Lucky Egg can help alleviate some of those rough positions when being too aggressive and potentially punished in the late game.

I’ll have to test more with Lucky Egg to see if they actually make a huge difference.

I do like the fact that if your main attacker has a Lucky Egg on it, then the opponent may not have a choice but to give you a free hand of 7. Against decks like Mewtwo & Mew-GX, I can see Lucky Egg being phenomenal due to them not playing Lysandre Labs, yet they play multiple copies of Reset Stamp.

Zach must have tested Lucky Egg quite a bit to decide to play 2 copies of it, and those are the main 2 cards that separate this list from any other.

That will conclude this article on the finalists’ decks of OCIC as well as the ADP/Zacian V list I played. I believe these three decks, along with PikaRom, will be the top four decks in Puerto Rico this weekend. These are my top decks going into Puerto Rico, but I’ll have to test some more to decide on what my final decision will be. Right now PikaRom is not really on my radar, but the other three decks are for sure.

I’m hoping after Puerto Rico that I can get back into Top 16 for overall rankings. I dropped a few spots down after OCIC due to not getting any CP, which is unfortunate, but I’m not too worried because there are still lots of events to go and I can replace a handful of small CP kicker finishes with better ones as the season progresses.

since League Cups were good to me this quarter. I’ll be grinding League Cups again to try and get a stipend to NAIC. Last season I was #1 for the NAIC Travel Award, so hopefully I can do it again, or at the very least get a Top 16 stipend. If you see me in Puerto Rico this weekend, be sure to come say hi. If you are attending Collinsville Regionals instead, then the best of luck to you.

As usual, I do full-time coaching, so if you are interested in lessons, feel free to message me either on Facebook or @Jose_MarreroTCG and we can go over the details. 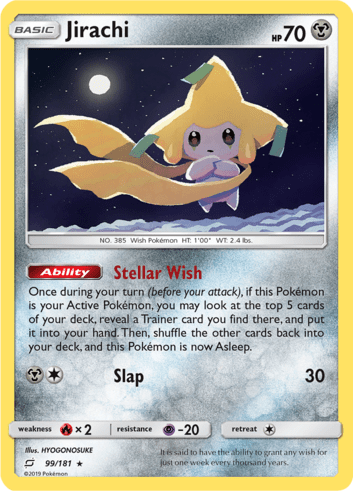