Hello 6P! Welcome to another new article of mine! August has been an interesting month for me with the formalization of the new branding for Tablemon, along with a more serious approach to the content creation aspect of it. I’m also in the midst of taking two motion design courses which have been very demanding and have kept me super busy, but they’ve also been very rewarding and I’ve learnt a lot from them too.

Pokémon-wise, I’m missing real life tournaments and competitions so much that I’ve decided to become a more regular competitor of all the weekly online tournaments we have going on. I had already mentioned these in a previous article, but I was still not participating weekly because of many things, including motivation. However, the past two weekends I’ve had a blast streaming the runs, especially the Sunday Open which features the possibility to switch decks every round and thus I let RNG take the wheel. I created ten different decks two weeks ago, for the last UPR–RCL format tournament, and let the Google Random Number Generator decide what I would play each round. I ended up going 3-3, but I had a blast playing the different decks. It was also a good way to avoid stream- or deck-sniping if you’re sticking to one deck. You watch the highlights of that run over here:

I also played in the PokeX Saturday Night League Challenge and got Top 8 with my trusty ADPZ deck that I used for the Players Cup as well. The highlights for that can be seen here, but be warned they are in Spanish:

This past weekend I decided to play in both tournaments again, as they are the first and only tournaments to feature the UPR–DAA metagame before we have the big Pokémon Online Global (POG) Championship next weekend.

The five decks that I chose to have available and let RNG decide for me each round were the following:

I Choose You, RNG

This is a hyper aggressive and turbo build of Vikavolt V, focused on trying to get an early Item lock of course, but leaning more toward the aggressive side of things after the initial “lock phase” with the Turbo Patch support. It has every single support Pokémon available at the moment, except for Oranguru SSH, which has made the deck consistent overall.

Supporters-wise, it has a standard engine but the single copy of Bellelba & Brycen-Man is there to help vs. Eternatus VMAX decks in theory. In reality though, I never faced any, but I did utilize BBM to win two matchups that would’ve otherwise been unwinnable via deckout. It was crazy to see all of the different win conditions I could pull off with this deck throughout my run, and it ended up being the deck that my viewers chose for me to feature in the second phase where you have to pick a deck and stick with it.

RNG chose this deck for Rounds 2 and 3 for me, and then I featured it four more times in Top 16 cut. This deck had some crazy games and I would recommend catching the VODs of this when they come out on my YouTube channel later this week.

Building on the 4 Capture Energy + 4 Quick Ball consistency theory that I mentioned last time that I was interested in exploring, this Eternatus VMAX list features the hyper consistency that I’ve been desiring in a top meta deck. 12 attachable Energy on turn one, plus seven ways to find an Eternatus V to attach to, plus hyper consistency with 4 Crobat V and extra damage output through Galarian Zigzagoon, along with an incredibly broken GX attack with Yveltal-GX’s Doom Count-GX—this deck has it all in terms of raw power, barring an answer to Decidueye DAA decks which I don’t rate very highly at the moment.

This deck wound up being selected by the random number generator for Rounds 4, 5, and 6 of the Sunday Open. And having had a bad run with it the day before I was skeptical of using it again. However, this time around, even though I whiffed a couple of key times on a simple Basic Pokémon to completely turn around games, I managed to squeak out three wins with it, including an absolutely crazy game where I had to battle a Metal Box deck that featured not one, not two, but THREE Zamanzenta Vs. I had to get creative (particularly so since I also prized my Yveltal-GX that game) but I was able to overcome that difficult situation.

These three games felt so much better in terms of the deck running properly than the previous four from the PokeX tournament the night before where I ended up basically rage-quitting and playing some Starcraft 2 instead.

The third deck I used in my run for the Sunday Open was ADPZ, featured in the first round. It changes slightly from my Players Cup build, in that unfortunately it needs to adapt to the new Eternatus VMAX threat and the insane damage output it threatens by adding Big Charms in order to allow ADP to tank a hit. 280 HP is surprisingly not good enough anymore, but 310 (with the Big Charm) is a lot better to have. That way you can actually Ultimate Ray after you’ve used Altered Creation-GX and establish a stronger board position.

Another new inclusion to the deck is Duraludon RCL, as, after the bonus damage from Altered Creation-GX, it can easily 1HKO Decidueye with Power Beam dealing 140 damage while tanking hits with its -30 Grass Resistance. Meaning if you have a Big Charm they won’t even be able to 2HKO with their only attack. It’s also a decent non-GX attacker that is well rounded and can even help support the deck with its Metal Sharpener attack to recover Energy and deal a little bit of damage.

In order to fit these cards I needed to sacrifice a little bit of the hyper consistency I had before, so the 4th Acro Bike, 3rd Energy Spinner, and 3rd Air Balloon were cut from my Players Cup list. It’s unfortunate, but the balance between consistency and versatility has to budge somewhere and the inclusion of Big Charms and Duraludon are necessary adaptations to the new threats in the metagame. Because of this though, Crobat V made its way into the deck, replacing Oranguru, which allows for a slightly deeper dig into the deck when you’re one card away from pulling off that coveted turn one Altered Creation-GX.

This deck went unused in the Sunday Open, but it felt very strong when I tested it on the DAA PTCGO release day, going undefeated with it for over an hour’s worth of games. My original list had Jirachi TEU, but I’ve been giving this Volcanion UNB list a try lately and enjoying the extra space I have by not being pressured into heavy Jirachi counts + switching cards, but rather the utility of Volcanion and the extra room for 4 Hyper Potions.

I’m not intending to use 4 Hyper Potion throughout one game, but by having four it’s more likely that I’ll be able to play two at once, which is the goal. Healing 240 damage in one turn in Standard at the moment is incredible. If you can pull it off once, it’s usually enough for it to win you the game. Hyper Potions also help mitigate the damage from PikaRom and other Metal decks that play heavy Metal Frying Pan, so I’ve been loving having four of them in the deck.

This is the deck I’ve explored the least and the one I’m interested in the most as I can tell the combination of healing plus Centiskorch VMAX has got to be brutal and exploited somehow.

Consistency and 1HKOs with a non-GX/V attacker—these two things are what have always made Blacephalon stand out. The lack of Dragapult VMAX and Obstagoon in the metagame, along with brand new 3-Prize attackers in Eternatus VMAX and Centiskorch VMAX, means this deck is well positioned for the POG 2020.

Not a single new card is included in this list as I don’t think any are necessary; however, we do include a copy of Galarian Zigzagoon to help round out some numbers and help our Energy become more efficient, as well as give extra meaningful use to the 4 Scoop Up Nets already in the deck. Saving an Energy for a 1HKO here or there has been the difference between winning or losing in my testing of this deck and I absolutely love having access to the card. It also opens up extra targets for Cramorant with 2-Prize support Pokémon other than Dedenne-GX are just sitting on the Bench such as Crobat V or Eldegoss V.

The rest of the list is what you would expect from Blacephalon, no surprises here really. I’m also interested in playing with the Jirachi p combo variant of this deck, as it opens up other win conditions as well and excels in the mirror match. It doesn’t require too much tinkering to fit the three cards needed—Jirachi p, Oranguru SSH, and Mr. Mime DET—as you can simply drop the Galarian Zigzagoon, the Mewtwo, and an Energy Retrieval and that should be good enough.

So I guess these are my top five decks as of writing this article for POG 2020 this weekend. I will continue to change and tinker with them throughout the week, and the weekend tournaments were great to practice and get a feel for the decks in a competitive environment plus what to expect from the metagame such as a TRIPLE Zamazenta V Metal Box deck and an Obstagoon + Decidueye deck!

I hope this article is helpful for you and if you haven’t had time to playtest or think about POG 2020 decks yet, these are certainly good starting places for that! Thank you so much and as always feel free to reach out here or on the Tablemon social media spots in case you have any questions. Thanks and best of luck in POG if you’re playing in it. Until next time! 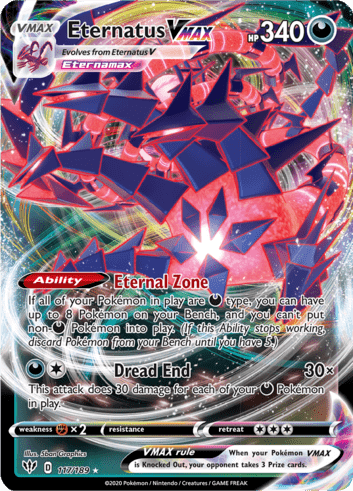