What’s up guys! It’s been a while since my last article, mainly because I have kind of been out of the game due to no in-person tournaments. I’ve spent my time off playing a lot of Hearthstone, cubing with friends, and preparing to go to college soon. I’ve played in a few online PTCG events, but I can’t find anywhere close to the same love I have for actual events in them, which is why I’ve played so few. However, POG is coming up and I am actually quite motivated to play in it. Darkness Ablaze has just released and what seemed like a mostly solved format is now shaken up again, and I’m excited to try and succeed in it.

To start, this is a pretty aggressive take on the deck. There are lists that are more control oriented which isn’t by any means wrong, I am just a bigger fan of this version of the deck. I think that Vikavolt is extremely strong in the expected meta and can handle pretty much anything that you throw at it due to its versatility of being able to lock your opponent while also being able to win Prize trades with big swings.

This take on the deck wants to Item lock your opponent early in combination with cards like Crushing Hammer, in an attempt to get ahead on tempo, then takes continuous big swings to win the game. The list also contains Turbo Patch, so you have a lot of burst potential should you fall behind early.

You may be concerned about the plethora of cards in the deck that involve coin flips. This is a subject that I’ve talked and thought about quite a bit as a player, and I’ve always leaned against flippy cards. For example, in this most recent OCIC I played a PikaRom list that contained Custom Catchers as opposed to Pokémon Catcher as I hated the flip aspect of Pokémon Catcher. I’ve also always professed that if you are a good player, or if you know what you are doing, your decks should rely on flips as little as possible.

However, there are a couple of reasons why I am a fan of this list for POG despite it going against what I would usually bring to an event:

Now that I’ve gone over some of the philosophy behind the deck, I’ll go over its matchups.

This matchup is generally favored for you as you have tools such as Crushing Hammer to help get the edge on them in combination with Item lock. From my testing, I’ve found that the key part of this matchup is finding your first 2 Prizes. Ideally for you, your opponent would start Crobat V and you would deal with it for your first two, but should they start Eternatus V or Zigzagoon, things get a bit more complicated. More often than not, your last 4 Prizes will be achieved by Knocking Out 2 Crobat V with Boss’s Orders, so finding those first two is the most important part.

They can normally attach only 1 Energy per turn, so one or two heads on Crushing Hammers in the early game is a huge tempo swing in your favor, as you are able to Item lock them, then likely get the first knockout. After that, it’s all about being able to consistently keep up the big knockouts by utilizing Tapu Koko p and Turbo Patch. Should you falter a little bit, you can also Boss’s lock a Crobat V Active with Paralyzing Bolt in combination with Absol TEU, making it extremely hard to move, thus locking in two more Prizes and more time to set up.

I generally hate having to spend multiple turns taking down an Eternatus VMAX as it is a lot of commitment, and it puts you on extremely odd Prizes, so try to avoid that. You need to be a bit lucky on Crushing Hammers if you want to commit to taking down an Eternatus VMAX. Another thing worth noting is that they can use Eternatus V’s Power Accelerator to help accelerate Energies thus making your Crushing Hammers less relevant.

Overall, you being able to disrupt them while also applying a lot of pressure leads this to be a favorable matchup, but there will be the games where you don’t flip any relevant heads and can’t seem to piece together all 6 Prizes due to how strong Eternatus VMAX is.

To tell it short, this matchup is similar to Eternatus in that it’s favorable, but isn’t completely unheard of for them to pop off and just beat you. Crushing Hammer is key here to stop them from getting an early Altered Creation. Even if they get it or turn two, you can still utilize Crushing Hammer to try to keep their ADP-GX in the Active with Item lock and Absol, thus taking your first 3 Prizes on it. Some lists have been including more non-Item switching cards such as Mallow & Lana and Bird Keeper, but they are hard to search for under Item lock, so it’s a matter of making them have it at that point.

If they are playing the more aggro all-in list, sometimes they will overrun you with Energies or even get the turn one GX attack which is really bad for you. Your game plan doesn’t change much, you just need to do everything you want to with less time before they blow you up.

This and all Welder variants are on the harder side for Vikavolt to beat. More commonly than not, you’ll get steamrolled by a single Centiskorch VMAX. Them being able to charge it up with both Volcanion UNB and Welder in the early game leaves your Crushing Hammers quite useless. Unless you get like three or four heads in one turn, you aren’t denying them the option to deal big damage.

The way you’ll win this matchup is likely by taking Prizes in a 1-3-2 order. First you will either have to go through a Jirachi TEU or a Volcanion UNB, then you will take hits with a VMAX, then you will likely have to Boss’s up one of the draw support 2-Prizers or a Centiskorch V.

It is also worth noting that opting to go second—or, a better way to word it, making them go first—is optimal in this matchup. If you don’t allow them to get the extra 3 Energies with Volcanion and use Welder before you’ve gotten any relevant board, you can actually get ahead quite a bit. The matchup is slightly unfavored—as I said before, you can just get rolled over—but it is winnable.

Most people have written this matchup off like it is the plague or that it is one big high-roll fest, and while they aren’t entirely wrong, I think there is more to explore in this mirror. The matchup can be quite toxic as you are both Item locking each other while doing minimal damage, but there are some things that can help get you the edge.

As said before, there will be those toxic games where it comes down to who soft locks the other first, but there are a few things you can do to help yourself.

This matchup I am a little less familiar with, but from the little testing I’ve done, it seems quite in Vikavolt’s favor. Item lock plus Marnie puts them in a sticky situation quite often, and if you are able to deal with the Polteageists accordingly, you will be smooth sailing to a win. Another thing you can do is bring up a Crobat V and lock it with Paralyzing Bolt and Absol, while denying Energy on the Bench with Crushing Hammers, locking in 2 Prizes. Mad Party has quite a bit of burst potential, so they are never really out of the game, but it is extremely hard for them to set up damage once they are Item locked. Once you are in a position where you can trade big attacks until you win, go for it.

I have done no testing against Decidueye so I can’t say anything for sure on this matchup, but early Item lock plus Marnie should be quite detrimental to their game plan. If they get fully set up amidst all of your disruption then yes, you don’t have a good response to them, but with POG Day 1 being best of one, you can probably finesse the win off of them should you hit one.

One of the big selling points for Vikavolt is that it is extremely consistent and versatile, which is something that you want going into a relatively blind format such as POG’s. Later down the line, we could see more tech cards to help deal with it, thus hindering its threat to the meta, but I think the current list I have is extremely strong going into this weekend.

I have the Day 2 invite due to me finishing within the Top 16 in North America, so I can’t say with absolute certainty that this list and deck for that matter are exactly what I’ll be playing, but it is what I put the most time into. I need to scope out Day 1 to see if the deck is still optimal. I doubt anything will change my mind though.

That’s all for now guys, hopefully I’ve piqued your interest in Vikavolt when it comes to potential plays going into POG, as it boasts a good matchup spread against the expected meta. I’m so excited to watch Day 1 and play in Day 2 because the format is super fresh and we certainly won’t be seeing the most optimal Pokémon being played, but in my opinion that’s a good thing! I love to watch new ideas that people bring to the table at the beginning of formats. A tournament with a format like this encourages preparation and good deckbuilding, so make sure that if you plan on playing and want to succeed, you put the time in. Good luck to everyone playing and I hope to see you all in Day 2 :). 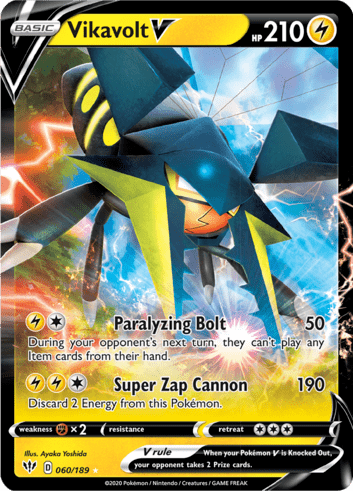 Buy it @ TCGplayer
Directly support Jon Eng, the author of this article, by shopping via the “Buy it” link above. Learn more.