Hello to all SixPrizes readers! How are you? I’m great! I’m back to bring you another article and this time I’m going to talk about Inteleon VMAX and Vikavolt V, two decks that have a lot of potential in the post-rotation (TEU–DAA) format.

Last weekend we had the Pokémon Online Global (POG) Championship, which was a world-class tournament held in the UPR–DAA (pre-rotation) format. Unfortunately, I couldn’t play because I was moving and I was still without internet in my new home. Far from being an online World Championships, the tournament was quite interesting and you can already see the impact of Darkness Ablaze on the metagame. The long-awaited Eternatus VMAX managed to make Top 8, but the tournament champion was good old PikaRom.

Now with the rotation coming, some things will change and consequently the metagame too. The biggest difference involves the Lightning type, which will lose powerful cards like Thunder Mountain p, Electropower, and Zeraora-GX.

The purpose of my article today is to explore the post-rotation metagame involving the Lightning type from two points of view. In one point of view, the metagame will be without a big Lightning deck, which allows free reign of Pokémon with Weakness to Lightning, like Inteleon VMAX. The other point of view is to build a competitive Lightning deck, even with all that lost strength.

The results of my testing and studies you can see now. Let’s read!

I believe that the post-rotation metagame favors Inteleon VMAX for three main reasons:

It’s funny how a Pokémon so mediocre in the previous format can theoretically become super suitable in the current format. Inteleon VMAX has two good attacks and they have a direct impact on the main matchups of the new format, which are ADPZ, Eternatus VMAX, and Fire decks in general.

I don’t think Inteleon VMAX is a super powerful deck, like Eternatus VMAX which can hit for 270 on turn two or ADPZ which can hit hard and draw extra Prizes, but I think of it as a good anti-meta deck. It seems strange to talk about anti-meta at a time when the format hasn’t even started yet, but I see Inteleon VMAX as an interesting option throughout the season.

Speaking of matchups, I believe that the ability of Inteleon VMAX to KO an Eternatus VMAX along with a Galarian Zigzagoon SSH on the Bench in two attacks makes the matchup at least balanced, because you then only need to Knock Out 1 Pokémon VMAX to win the game. Against ADPZ, the matchup is pretty even; Inteleon VMAX is able to delay ADPZ’s game plan with its Energy removal strategy. Against Fire decks like Centiskorch VMAX, Water naturally has a big advantage.

Inteleon V is not very good—the focus here is Inteleon VMAX. Its first attack, Hydro Snipe, is stronger than it looks and can bring you victory, as it can delay the opponent’s energization. Against ADPZ this attack is typically good, but I use it a lot against Eternatus VMAX too. Hydro Snipe is such an interesting attack that there are lists focused on it along with Crushing Hammer to further delay the opponent, but I still think that Max Bullet should be your focus.

Max Bullet is what makes Inteleon VMAX good against Eternatus VMAX and Fire decks. The attack deals 160 + 60 damage to a Pokémon on the Bench, which allows you to almost KO most Pokémon VMAX in two attacks and almost KO Pokémon with more than 60 HP, such as Galarian Zigzagoon SSH or Jirachi TEU, in one attack.

I’m a big fan of Oranguru SSH in general. I don’t need a big reason to use it in the deck; I believe that its Ability helps a lot with consistency.

Here we use Scoop Up Net to reuse Primate Wisdom. We also use Mewtwo UNB, so we want Oranguru to retrieve the Supporter that Mewtwo will place at the top of the deck with its Mind Report Ability.

Since we use Scoop Up Net and Oranguru, I decided to include a copy of Mewtwo, mainly for greater access to Team Yell Grunt and Boss’s Orders when needed.

I believe that Giratina will be even more effective in the post-rotation format, as we have enough Special Energy in the format and the main decks can make use of them.

Along with Inteleon VMAX’s Hydro Snipe attack, it is possible to remove 2 Energies in the same turn from the opponent’s Active Pokémon, which can be devastating. If an Eternatus VMAX loses 2 Energies, it will only be able to immediately attack again with a heads on Turbo Patch.

I believe this is the minimal line to avoid problems of consistency.

They are the best draw Supporters currently.

The ideal would be to play with 3 Boss’s Orders, because Inteleon VMAX is designed to Knock Out Pokémon VMAX or TAG TEAM in two attacks, but 2 copies have worked.

In addition to the Hydro Snipe and Giratina UNM, we also have a copy of Team Yell Grunt to disrupt Energies.

For me these has been the ideal numbers so far, and I prefer Pokémon Communication over Evolution Incense for its versatility in being able to get the Pokémon I want.

To ensure good mobility and not suffer problems from of a lack of switching.

This is one of my bets to make Inteleon VMAX more competitive. I didn’t really like Frosmoth SSH to energize Inteleon, as I see the deck requiring a lot of extra effort to get another Evolution into play so that I can attach 1 or 2 extra Energies per the turn.

It improves the deck’s mobility some and allows you to reuse the incredible Abilities of the deck’s non-Vs and non-GXs.

With Vitality Band, Max Bullet will hit for 170 instead of 160, which makes it perfect for Knocking Out Eternatus VMAX (which has 340 HP) in two attacks.

It is a necessary card in the format. Every deck I play without Reset Stamp I feel something is missing.

Vikavolt V: Is it still good?

Lightning lives in a complicated place in the post-rotation format. Without Electropower and Thunder Mountain p, all Lightning decks have lost strength and speed. PikaRom is practically retired without these cards and Vikavolt V also lost a lot.

To compensate for these losses, I decided to focus on Vikavolt V and Energy removal. With the very strong, Item-locking Paralyzing Bolt attack, we can disrupt the opponent and hinder their entire strategy.

Tapu Koko V is a reasonable attacker too. Spike Draw gives you a turn one attack and draws 2 cards, but, honestly, it is an attack I almost never use. Thunderous Bolt is more interesting. It does 10 more damage than Vikavolt V’s Super Zap Cannon and doesn’t discard any Energy, so every time I need to use Super Zap Cannon to do high damage I try to use Thunderous Bolt instead as it is a slightly better attack.

Vikavolt is your main attacker and a good starter if you go first.

Tapu Koko p survived the rotation and it is responsible for Vikavolt V being able to Paralyzing Bolt on turn one without depending on Turbo Patch.

The deck needs to dig sometimes, either to attack on turn one or find resources to remove the opponent’s Energy.

Galarian Zigzagoon is not essential to this deck in the same way that it is to Inteleon VMAX, but Zigzagoon will allow for interesting plays here. You realize that Vikavolt V enjoys the company of Zigzagoon only after you play with the deck a lot, because you are often missing 20 or 30 damage for a knockout.

So: Galarian Zigzagoon + Scoop Up Net serve to replace the extra damage from Electropower but with a little more versatility (and less explosiveness).

As I said before, I like this combo with Scoop Up Net.

Marnie is the most important Supporter in the deck, but Professor’s Research is still essential to set up, especially on turn one.

The Marnie + Item lock combo is naturally strong against any deck in the format. That’s the bread and butter of Vikavolt.

I would like to find space for the 3rd copy, but two are OK.

In addition to Crushing Hammer, Giratina UNM, and Dangerous Drill, we have another way of removing Energy.

With relatively few Pokémon in the deck, Pokémon Communication won’t work very well, so I prefer the Great Ball in this scenario.

I use Switch infrequently one the game gets going, but it is necessary to be able to attack with Vikavolt V on turn one.

If we don’t have the additional damage from Electropower to speed up knockouts, then we have to delay the opponent so that they play at the same slow pace as ours.

Cape will not help much against ADPZ if they get off Altered Creation, but it will help a lot against Eternatus VMAX and Fire decks. +50 HP is a lot, leaving Vikavolt V with the HP of a TAG TEAM practically.

I started testing Dangerous Drill in Eternatus VMAX and I really liked the result, so I decided to test the idea in Vikavolt V, since I have 4 Darkness-type Pokémon. The advantage of Dangerous Drill is that I can remove Special Energy from my opponent’s Bench, in addition to being able to remove Tools and Stadiums.

The Reset Stamp is not great in this deck, as all my attackers give up 2 Prizes—that is, I can almost never Stamp to 1.

Mainly to counter Black Market p and Wondrous Labyrinth p, but it helps to block Giant Hearth as well.

I felt that I could even play with 7 L + 4 Speed L, but I’m afraid of missing the Paralyzing Bolt T1.

Although they are completely different decks, it is possible to see many similarities between Inteleon VMAX and Vikavolt V. I decided to use the same structure to enhance their best attributes, making the necessary adaptations. For example:

In such a fast format, Vikvavolt V and Inteleon VMAX decks try to compensate for their lack of speed in other ways. Inteleon VMAX bets on multiple knockouts and a light Energy removal strategy, while Vikavolt V bets on Item lock and a lot of Energy removal.

That’s all, folks. I hope you enjoyed and see you soon! 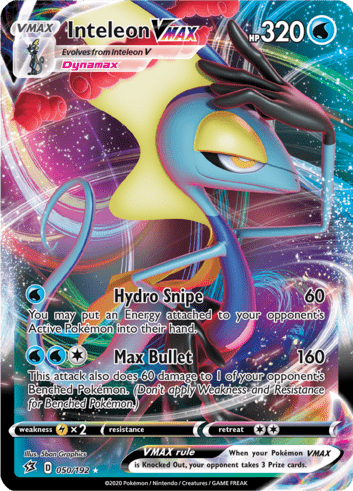